What Are the Best Energy Solutions for Australia?

Home » What Are the Best Energy Solutions for Australia?

Since 2020, two former Origin Energy executives, Tony Wood and Andrew Stock, have spoken out against the Australian government’s “gas-led recovery” plan. Both argue that more natural gas projects will not reduce Australia’s greenhouse gas emissions, nor will they increase profits. Instead, Australia should turn to renewable energy solutions, according to them.

In fact, even the government’s own predictions show that fossil fuels are a bad long-term investment. That is because other countries have implemented net-zero emissions targets. As a result, they will cut imports of high-emissions fuels, such as coal and natural gas.

Fortunately, Australia already has the required clean energy solutions at its disposal. These will not only help the country to tackle climate change, says Stock. They also mean that Australia can prosper in a net-zero world. In May 2021, the International Energy Agency (IEA) provided a roadmap for how the world will get to net-zero by 2050. Renewable energy should be the focus, it stated. This is in addition to energy efficiency and electrification.

Renewable energy solutions will improve Australia’s economy by more than AUD $13 billion. This was the forecast in a 2019 report from the consulting firm PwC. Therefore, Australia should aim to use mostly renewable energy by 2040. On top of a strong economy, this would deliver reliable and affordable electricity, said the report.

Fortunately, the amount of renewable electricity in Australia is higher than ever. In late 2020, renewable energy provided more than 30 per cent of the power to the National Electricity Market. This marked a five per cent increase from 2019. This was driven by a rise in the number of homes with solar panels on their roofs. In fact, this number grew by 40 per cent in one year.

On 11 April 2021, renewables reached a peak of 55.9 per cent in the electricity market. This was a new record for a specific day. Again, rooftop solar generated a lot of electricity, along with wind and solar panel farms. Hydroelectricity also contributed. At the same time, pumped hydro stations and big batteries stored some of the electricity for later use.

This provides a preview of how renewable energy sources will work together in the future. Let us take a look at each one of these energy solutions.

Solar photovoltaic panels use energy from the sun to generate electricity. This is both clean and quiet. On top of this, solar panels generate electricity during the day. This is when there is the highest demand for power. Plus, Australia is one of the sunniest places in the world. Therefore, solar power is a great energy solution down under. Already in 2020, Australia ranked number one in the world for per capita solar generation. This means that the country produced more solar power per person than any other nation.

There are two types of solar power. These are rooftop solar and large-scale solar. 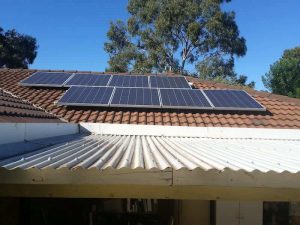 Rooftop solar uses panels on roofs of homes and buildings. Households and businesses install these panels to generate their own electricity. There has been a steady increase in solar installations in recent years. Consequently, almost three million Australian households now have rooftop solar. That is over a quarter of homes in Australia. Therefore, rooftop solar is likely to be one of Australia’s energy solutions long into the future.

Large-scale solar uses the same technology as the roof-top variety. But these projects place many solar panels in one area. These are called solar farms. These farms then inject power directly into the electricity grid. Since 2015, solar prices have dropped drastically. This makes it an attractive energy solution in Australia. Therefore, this has encouraged energy providers to invest in solar. Consequently, there were 52 large-scale solar farms under construction at the end of 2020.

Wind power works in a simple way. When the wind blows, it spins the blades of a wind turbine. In turn, the blades drive a generator that produces electricity. Similar to large-scale solar, wind power exports electricity directly to the grid. Wind turbines have become much more efficient in recent years. Plus, they are still the cheapest source of large-scale renewable energy.

Wind is currently one of Australia’s leading energy solutions. In fact, it was Australia’s number one source of clean energy in 2020. By the end of 2020, there were 21 wind farms under construction or with promised funding nationwide. Therefore, it is obvious that companies perceive wind as an important part of Australia’s future energy mix. 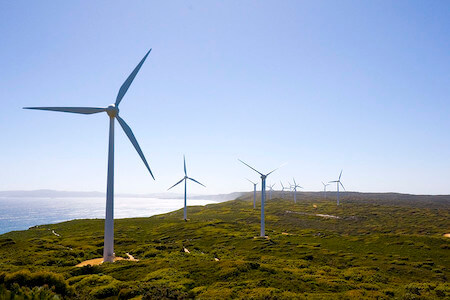 Hydroelectricity is a renewable energy technology that is more than 100 years old. Australians often simply call it hydro. Hydroelectric power stations use flowing water to spin a turbine. Then, this turbine powers a generator that produces electricity. Until 2019, hydro was Australia’s leading renewable energy generator. Now, wind and rooftop solar have overtaken it. However, hydro will remain an important energy solution in Australia. That is because it can help to store electricity created by other renewables.

Energy storage solutions will allow Australia to create 100 per cent of its electricity from renewable energy. That is the opinion of Lillian Patterson, Director of Energy Transformation at Australia’s Clean Energy Council. These solutions will store electricity. Then, at times when the weather prevents renewables from generating much power, this electricity is available. Australia needs different types of storage, says Patterson. This includes batteries for short periods of time and pumped hydro for longer periods.

Pumped hydro sites have two dams. One of these is higher than the other. When the electricity grid does not need power, turbines pump water into the higher dam. This stores the energy. Then, site operators release the water into the lower dam to create energy when required.

Pumped hydro is both efficient and cheap, says the Australian government. Accordingly, it is one of the energy solutions with both state and federal government support in Australia. This has led the government to fund and approve large projects. An example of this is Snowy 2.0 in New South Wales.

Australia had sixteen large-scale batteries under construction at the end of 2020. Both state governments and private energy producers have provided funds for these batteries. These will support renewables in the electricity grid. At the same time, many Australians have installed batteries at home. Specifically, 23,796 batteries in 2020. This allows households to store the electricity from their rooftop solar panels. 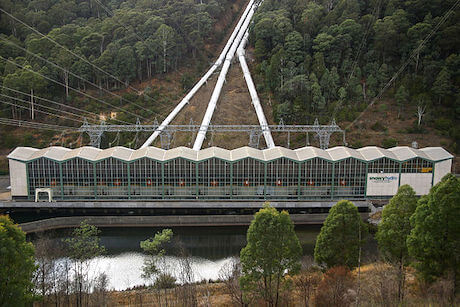 Australia’s energy sector is not alone in the race to reach net-zero emissions. In fact, buildings are responsible for almost a quarter of Australia’s carbon emissions. That is why Ernst and Young advocate the federal government to invest in energy efficiency. In other words, renovate Australia’s buildings so that they do not use as much energy. This could even be more useful than investing in clean energy, according to the consultancy. That is in terms of “cost, quality of life improvements and job creation.”

There is another important pillar in the IEA’s net-zero by 2050 roadmap: electrification. In other words, this is replacing fossil fuel applications with electricity, such as electric vehicles or heat pumps in buildings. Of course, this is only beneficial if renewable energy solutions generate this electricity.

Manufacturers should also replace fossil fuels with electricity from renewable sources. This would cut Australia’s emissions by up to eight per cent. That was the finding of a 2018 report from think tank Beyond Zero Emissions. For example, electric heat pumps can replace gas for many industrial applications. However, some sectors are hard to electrify, for instance, chemical and steel production. Fortunately, green hydrogen offers solutions, according to energy experts. 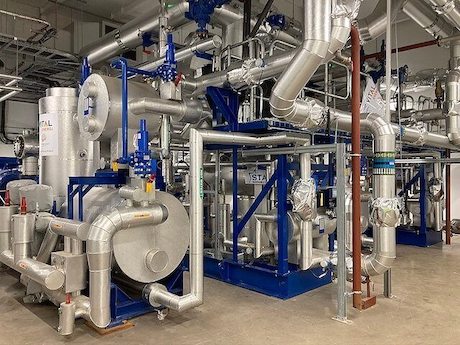 Humans can obtain hydrogen by shooting a strong electrical current through a tank of water. This then splits the water molecule. Consequently, this leaves two hydrogen molecules and one oxygen molecule. To get green hydrogen, humans must use renewable energies to generate the electrical current. This is the only proven form of hydrogen that does not create greenhouse gas emissions. Hydrogen offers two different energy solutions. First, humans can burn it to produce heat. Second, we can convert it to electricity.

Currently, green hydrogen is expensive. So, industries do not yet use it widely. However, in the coming years, the price will drop sharply as renewable energies also become cheaper. That is the opinion of energy analysts. Moreover, since 2020, both the federal government and businesses have invested large amounts of money into hydrogen. This could enable Australia to produce steel without carbon emissions. Furthermore, green hydrogen could replace the country’s natural gas export industry. That is, Australia could export hydrogen to Asian countries that have little access to cheap renewable energy.

However, Australians should be wary of government investment in hydrogen that is not green. This will only give a reason for Australia to keep using fossil fuels to create this hydrogen. These are not the energy solutions that the country needs. Instead, Australia must use renewable energy to cut emissions in the energy sector. At the same time, improving energy efficiency will reduce the amount of energy that buildings use. Finally, electrification will further reduce dependence on fossil fuels.