In June 2021, the Northern Territory Senate voted for a parliamentary inquiry into fracking in the Beetaloo Basin. Earlier in the year, the federal government had announced its support of the shale gas project. In fact, it promised AUD $50 million to the gas industry for the project. This led Traditional Owners across the Northern Territory to fight the idea. Therefore, the inquiry is seen as a win for these Indigenous Australians.

However, there are plenty of similar projects underway down under. Plus, federal government support means there could be more fracking in Australia from 2021 onwards. But Australians should not allow these to go ahead. Below are the reasons why Australia should stop fracking.

Fracking is short for hydraulic fracturing. The term describes the process of injecting a mix of water, sand and chemicals into the ground. This opens cracks in underground rock. Then, miners can extract the natural gas that flows from these cracks. Unfortunately, this can cause many environmental issues.

For example, fracking uses up water supplies. It can also lead to reduced groundwater and surface water quality. On top of this, chemical spills at the surface level have also been a problem. Also, not to mention the potential increase in seismic activity fracking causes, i.e. earthquakes.

Oil and gas impacts on flora and fauna

Furthermore, any oil and gas drilling has environmental impacts. This is even the case if miners do not use fracking. This includes reduced air quality, noise and night sky light pollution. Plus, this drilling can cause changes to the landscape and disrupt animal habitats.

Regulation does not remove risks

These environmental concerns are real for Australians. For example, a 2016 report on the impact of shale gas in the Northern Territory warned against fracking. It “comes at great cost and risk to the environment and general public”, stated the report. This is because, even with regulation in place, accidents happen. Unfortunately, these accidents cause the environmental issues listed above.

2. Traditional Owners are against fracking

Traditional Owners cite the above environmental consequences in their opposition to fracking on Aboriginal-owned land. Therefore, community organisations, such as the Protect Country Alliance, have launched campaigns to stop fracking activity. This includes the Don’t Frack the Territory campaign.

More projects in the pipeline

Furthermore, fracking in areas such as the Beetaloo Basin will allow further gas projects to go ahead. This includes the Amadeus to Moomba Gas Pipeline. The federal government envisions that this pipe will transport gas from the Northern Territory to east coast gas markets. Consequently, this new infrastructure will run through large parts of the country. Not only could it harm these sensitive ecosystems, but these areas are culturally important to Australia’s Traditional Owners. 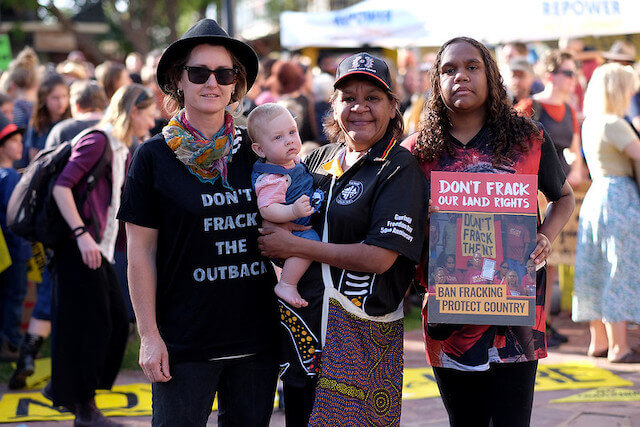 Australian farmers have battled against coal seam gas development for decades. That is because many of them oppose fracking on their land. Therefore, various farmer groups have lobbied against fracking in Australia, particularly in Victoria and the Northern Territory. This is because these bans protect agriculture, they say.

Particularly, fracking is a threat to water supplies for farming. Thus, this battle against gas continues. For example, in February 2021, farmers voiced their concern over new natural gas projects in Western Australia. That is because they are worried that this will lead to more fracking.

Natural gas causes about 19 per cent of Australia’s greenhouse gas emissions, in other words, the pollution that causes Earth’s atmosphere to heat up. Therefore, this fossil fuel is a major contributor to climate change.

The Australian government calls natural gas a clean alternative to coal. While it is true that burning gas as fuel produces about 50 per cent less carbon dioxide than coal, natural gas is made up of another greenhouse gas: methane.

The problem is that methane is a much more powerful greenhouse gas than carbon dioxide. Therefore, if natural gas leaks before being burnt, it can be just as bad as coal. Specifically, it only takes three per cent of it to leak for that to be the case. However, scientists do not know the exact amount of methane leakage from Australia’s natural gas industry. It is estimated to be one per cent to eight or nine per cent.

Fracking projects and the climate

In 2020, there were 22 proposed major gas production projects in Australia. If these go ahead, they will cause the same amount of greenhouse gases as what the country currently emits per year. The natural gas industry will need fracking to access gas in some of these projects. This includes the Beetaloo Basin. Unfortunately, this natural gas development alone could increase Australia’s emissions by between seven and 22 per cent.

5. Most of Australia’s natural gas is exported

However, the federal government continues to support such fracking projects. That is because it believes adding more gas supply will decrease prices. But, in fact, Australia’s gas supply has increased three-fold in the last decade. Yet, gas prices in the east have continued to rise. That is because Australia exports about 70 per cent of its gas. Of course, this decreases supply. Therefore, the country does not need more fracking projects. But rather, more gas export market regulation.

The federal government’s “gas-fired recovery” is not only supposed to lower energy prices. It should also stimulate job creation, says the government. In reality, it will lead to few jobs. That is the finding of Australia Institute analysis in 2020.

In general, the gas industry has a relatively small amount of jobs compared to other industries. Namely, just 0.2 per cent of Australia’s workforce works in the gas industry. Therefore, these are “capital intensive, job poor industries”, according to the Australia Institute. On top of this, the natural gas and oil industries pay little tax, says the think tank.

In fact, Australia’s largest telco paid 20 times as much corporate tax as all of the country’s oil and gas companies in 2016-17. This led one energy analyst to say, “Australia is literally giving away its natural wealth”. To whom this wealth is going is not hard to find.

Some of Australia’s richest business people have invested in Australia’s fracking future. For example, mining magnate Paul Espie is a big promoter of the Beetaloo Basin. He has also attracted other wealthy Australians to invest in his fossil fuel company, Empire Energy. Consequently, there is now a lot of money behind the project. That may explain the government’s continued interest in fracking the Northern Territory, in addition to Espie’s close links to Australia’s ruling party.

7. A gas phase-out would benefit manufacturers

On the other hand, the Australian Industry Group wants to move on from natural gas. Therefore, in 2020, the peak body of the country’s biggest manufacturers asked the federal government to help these companies electrify. Specifically, they want to use electric heat pumps rather than gas boilers. This would allow companies to cut both emissions and costs, says the peak body.

8. Fracking locks in gas at the expense of renewable energy

Instead, the federal government has promised to subsidise the natural gas industry for years to come. This will be costly economically and also to the climate. Fracking will allow the industry to extract the gas that remains in Australia. But, this process is expensive. Therefore, the industry will want to use up these resources. That way, these companies can make their money back. But Australia simply does not need this gas. That is because renewable energy is already cheaper.

Therefore, these clean technologies are already on track to replace gas in Australia. The story is the same globally, according to the International Energy Agency. So, there is no reason at all for Australia to continue to allow fracking. 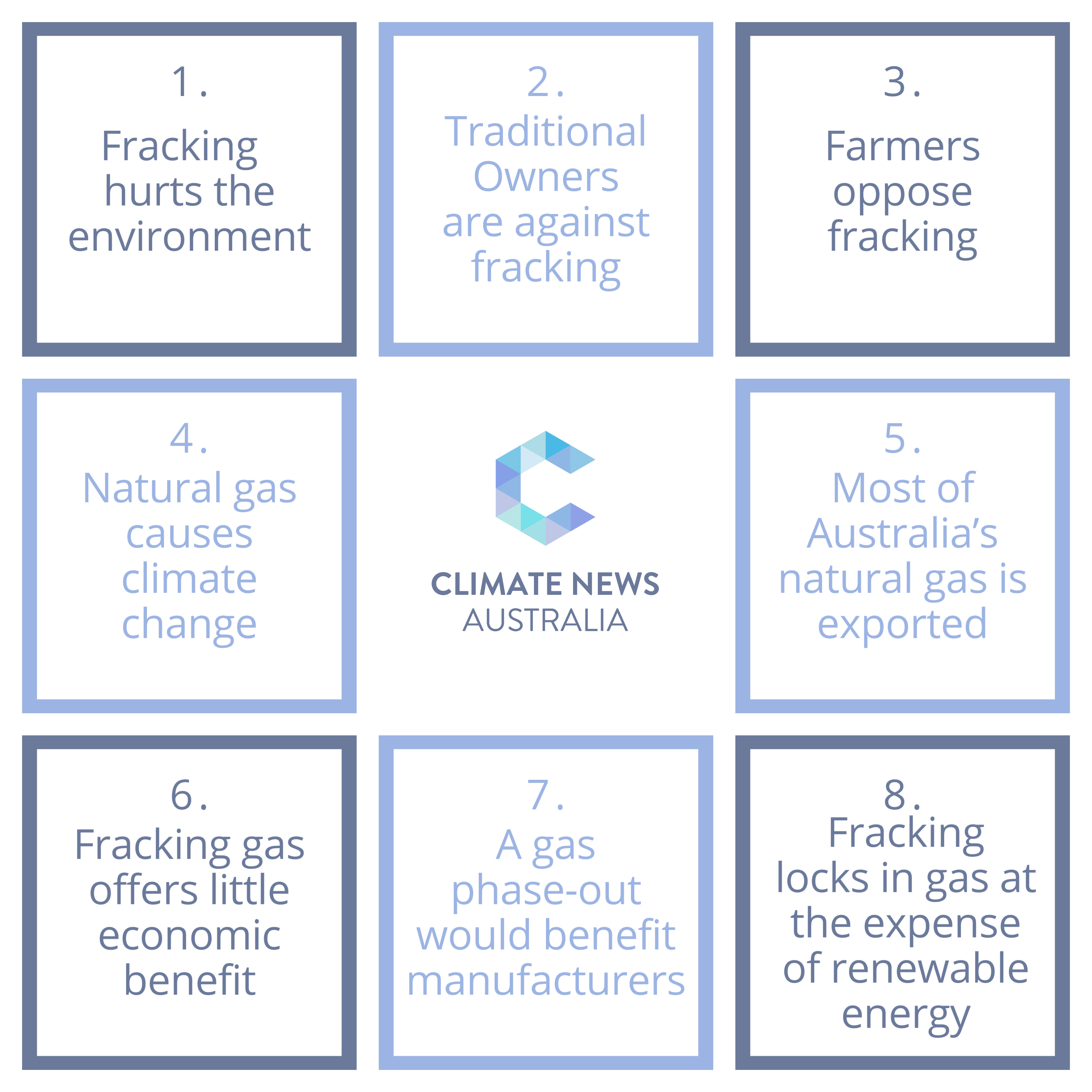