Fracking in Australia in 2021

Throughout 2021, the fossil fuel industry will continue its fracking activities in Australia.1 Federal Energy Minister Angus Taylor does not oppose this.2 In fact, in 2020, he visited a fracking site in the Beetaloo Basin in the Northern Territory. This greatly angered the Traditional Owners of the land. They strongly oppose the natural gas development.3 But, Taylor believes that anti-gas activists are “acting against the interests of Australia”.4

So, why are some community groups so strongly against natural gas developments? Also, why does the government support the fossil fuel industry? Let’s find out.

Why is fracking (hydraulic fracturing) controversial?

Hydraulic fracturing – or fracking – is a risky mining method. In 2016, the US Environmental Protection Agency found proof that it contaminated drinking water. Also, it has caused earthquakes in the US. Moreover, fracking critics are against industrial infrastructure on rural farmland. They say that it leads to noise and air pollution.5 This has detrimental effects on people’s health, research suggests. Therefore, fracking in Australia in 2021 could cause higher rates of asthma and cancer for people who live near drilling sites. It may even cause preterm births.6

In Australia in 2021, miners mostly use fracking to extract unconventional natural gas sources. Shale gas, tight gas and coal seam gas are types of unconventional sources.7 Conventional gas sources are often offshore. But unconventional sources are not. For example, the gas industry has found coal seam gas in regional areas of Australia. This can be near farms and rural communities.8 Therefore, fracking has potential social and economic impacts on these communities.9 Consequently, it makes sense that they oppose fracking. Community groups have also cited the health and environmental risks of fracking in Australia in 2021.10

Community opposition to fracking in Australia in 2021

The Lock the Gate Alliance is one of these groups. Members are worried that fracking contaminates and depletes water sources. In addition, they have raised the potential health impacts on workers and residents. Lock the Gate has further pointed to evidence that fracking destroys farmland and animal habitats.11

Despite this, many Australian states still allow fracking in 2021. This includes Queensland, New South Wales, Western Australia and the Northern Territory. On the other hand, state governments in Tasmania and Victoria have banned fracking.12

Research shows that the fossil fuel industry has underestimated its methane emissions by 25 to 40 per cent globally.17 The natural gas industry releases about 19 per cent of Australia’s greenhouse gas emissions. That is according to official records. However, the gas industry does not measure its “fugitive emissions” correctly. This is the methane that gas producers release during drilling and processing.18 So, the Australian natural gas industry has a larger impact on the climate than it claims.19 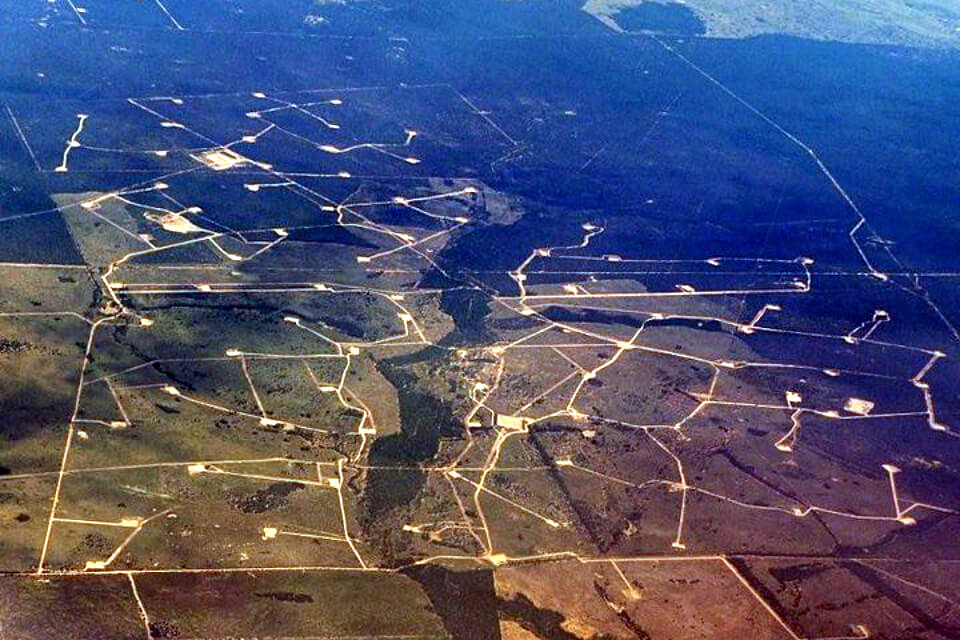 “Coal seam gas field, Chinchilla, Qld” by Beyond Coal and Gas is licensed under CC BY 2.0

Are there fracking projects planned for Australia in 2021?

There are several new fracking projects underway in Australia in 2021.20

Origin Energy has started fracking the Beetaloo Basin in the Northern Territory. This project alone could raise Australia’s greenhouse gas emissions by between 7 and 22 per cent.21

The Amadeus Basin in the Northern Territory to eastern states

A large natural gas group has also asked for government approval for a project in Queensland. If approved, it would allow the companies to drill 7,700 unconventional gas wells. Some of them are near national parks. The group’s application predicts that the proposal could impact 26 plant and animal species. Furthermore, it could affect six threatened ecological communities. Two community groups have spoken against the project. The plan would “transform rural localities and communities into industrial gas fields”, say the Lock the Gate Alliance and Don’t Frack the Outback.24

Furthermore, there are community concerns about fracking in Western Australia in 2021. The state government has increased natural gas exploration licences in the state’s mid-west. Therefore, fossil fuel companies could find unconventional sources there. There is nothing to stop these companies from fracking, say farmers and activist groups.25

Is the Australian government funding gas?

Australia’s federal government has promised nearly AUD $53 million to fund gas projects. This includes the Beetaloo and Amadeus Basins projects outlined above.26 The federal government also plans to build a large gas-fired power plant in the Hunter region of New South Wales. It will use tax-payer money for this. This comes after two larger private energy providers stopped plans to build similar-sized gas power stations. The companies made that decision due to New South Wales’ 2020 energy infrastructure roadmap. The roadmap revealed that the state government would focus on renewable energy projects.27 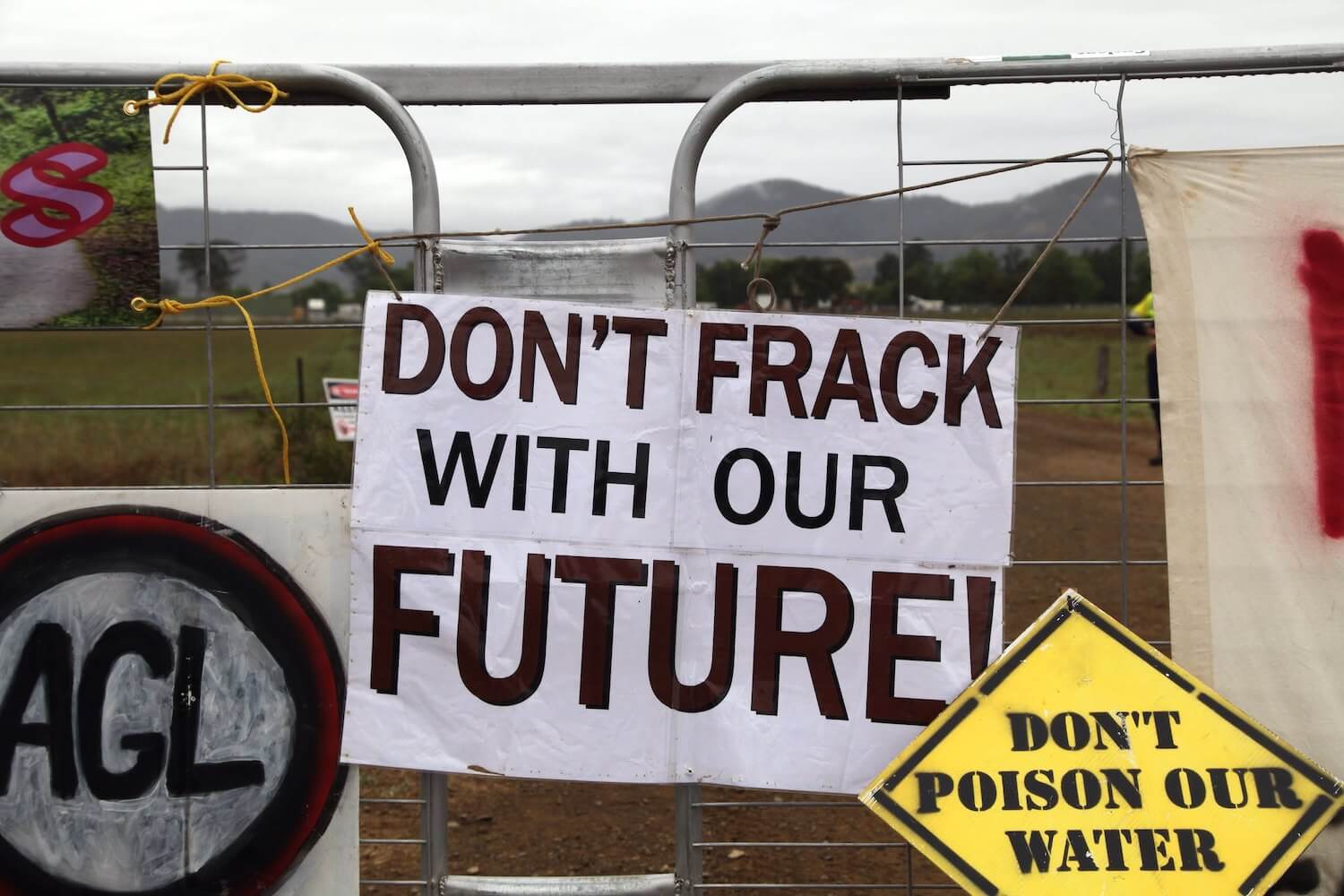 “Lock-on at AGL’s CSG fracking site at Gloucester” by kateausburn is licensed under CC BY 2.0

Why is the Australian government backing fracking in 2021?

Does it increase the number of jobs?

In 2017, Josh Frydenberg was Federal Minister for the Environment and Energy. He called for an end to all fracking bans. That is “because more gas is good for jobs and it’s good for energy security and supply”, he said.28 But an investment in natural gas does not lead to more jobs, according to Australia Institute research.29

For every AUD $1 million of output, the natural gas industry employs around 0.4 people. The same amount of output in health and education produces more than 10 times the jobs. In fact, government investment in nearly any other industry would lead to more jobs.30

Will it bring down the price of gas?

The government intends to fund natural gas projects to supply gas to eastern states. It says that this will bring down the price of gas.31 Unfortunately, the gas basins that it will subsidise are remote. This increases the cost of transport. This gas will also be expensive to exploit. Therefore, the basins will only produce higher-priced gas.32 This is because 90 per cent of natural gas reserves in eastern states are unconventional gas deposits, such as coal seam gas.33 Production costs for coal seam gas are about 35 per cent higher than conventional natural gas.34

In 2021, Energy Minister Taylor still insisted gas-fired electricity would bring energy prices down. New South Wales’ Energy Minister, Matt Kean, disagreed with him. This is despite them being from the same political party. “Using gas to create electricity is a costly way to do it. If  you’re interested in driving down electricity prices, then you’d be mad to use gas”, said Kean.

Instead, New South Wales has plans to fast track renewable energy. Another state led by the same political party is South Australia. It has bet its energy future on renewable energy storage batteries. The state says that it will use 100 per cent net renewable energy by 2030.35

Renewables are cheap and reliable

Australian electricity grids mainly use natural gas when they need extra power quickly. Now renewable energy and storage can do this at a better price. Examples of storage technologies are big batteries and pumped hydropower.36 Big batteries can meet peak demand for electricity as much as 30 per cent cheaper than natural gas.37 Renewable-energy supplied electricity will be just as secure as coal and gas-generated electricity.38 Therefore, in the next 20 years, we will use less and less natural gas to create electricity. In fact, gas consumption in Australia’s main electricity grid will all but vanish.39

The expansion of renewables brings electricity prices down

Natural gas is on the way out. Renewables are here to stay. The Australian states understand this. We just need the federal government to follow suit. Therefore, 2021 should be the year that Australia moves away from fracking.