What Is Fracking & How Is It Used in Australia?

Home » What Is Fracking & How Is It Used in Australia?

What is fracking (hydraulic fracturing)?

Fracking is short for hydraulic fracturing. The mining industry uses fracking to get natural gas or oil from deep underground. Miners inject a mix of water, sand and chemicals into the ground. They do so at extremely high pressures. This creates cracks in the underground rock. Miners can then extract the gas or oil.1

What does the Australian gas industry use fracking for?

What is the opposition to fracking?

Many community groups in Australia oppose fracking for oil and gas production. They are worried about its risks to people’s health and the environment.3 These groups say that oil and gas drilling and the fracking process contaminate water supplies.4 This has been confirmed by US studies.5 6 However, in Australia, the gas industry funded a study that suggested fracking has little impact on the environment.7

The dangers of natural gas production and methane to the environment

In general, the oil and gas operations industry is a climate hazard. Like coal, natural gas is a fossil fuel. Natural gas production releases much less carbon dioxide than coal production. That is why some people claim it is a clean fuel. But natural gas production and transport release a lot of methane. That is a potent greenhouse gas.8 Over 20 years, methane traps 86 times more heat in the atmosphere than carbon dioxide.9 Australia’s government does not measure the natural gas industry’s methane emissions correctly. So, Australia may underestimate its greenhouse gas emissions by about 10 per cent.10

How is fracking occurring in Australia?

Each Australian state has different rules for fracking. Queensland has the most lenient rules. This makes sense as it has the highest coal seam gas production. The gas industry has also fracked for coal seam gas in New South Wales.11 Fracking has now begun in Western Australia and the Northern Territory.12 On top of this, Australia’s COVID-19 economic recovery commission pushed to remove more fracking bans.13 This committee was chosen by the government.14

The Australian government has backed gas to strengthen the economy. It says, if we increase natural gas supply, energy will become cheaper.15 In 2020, the federal government, therefore, announced support for five new gas basins.16 However, only unconventional gas sources remain in most Australian states.17 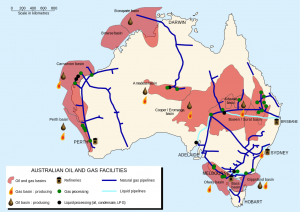 A number of these new gas projects are already underway.18 For example, Origin Energy has started fracking activities at Beetaloo Basin in the Northern Territory. This project alone could increase Australia’s greenhouse gas emissions by between seven and 22 per cent.19 There is also a plan to transport gas from the Amadeus Basin in the Northern Territory to eastern states. The government would help pay for this.20 This would open up the opportunity for fracking not far from Alice Springs.21

Is there a need for more oil and gas production in Australia?

But, what use is fracking when Australia already has over 20 years of gas supply available?22 To meet the demand for exports.23 Liquefied natural gas (LNG) exports account for about 80 per cent of Australia’s natural gas production.24

Australia is the world’s largest exporter of LNG. Qatar is in second place. LNG companies export around 80 million tonnes of gas from Australia per year.25 New gas projects will not only increase supply in Australia. They will also grow the export industry.26

However, given that gas is highly polluting, this industry is under threat. Australia’s three biggest LNG customers are China, Japan and South Korea. All three have committed to net-zero emissions targets. Therefore, they will reduce their imports of LNG from Australia.27

Unlike the Australian government, many investors have already turned away from gas. This will leave gas producers with “billions of dollars of assets they cannot sell”, says the Australian Financial Review. The cost of renewable energy has dropped dramatically since 2010. This has made gas-fired stations less competitive.28

Since 2014, Australia’s use of gas has fallen 21 per cent. At the same time, renewables now produce 28 per cent of the energy in Australia’s biggest electricity market. This has happened because the cost of renewable energy storage batteries dropped quickly.29 Natural gas use in Australia will continue to fall in the next 20 years. Energy companies are forecast to shut down more than two-thirds of gas power stations.30

Despite this, fracking in Australia will likely increase. This is because the government’s handpicked committee has called for fewer fracking restrictions. The government also wants more unconventional gas mining.31

But fracking is not what Australia needs. Renewable energy and storage technologies can already supply energy cheaper than gas.32 It is time to do away with this dirty practice.