Australia’s Federal Resources Minister, Keith Pitt, supports liquefied natural gas (LNG) projects. He confirmed this in May 2021. Pitt announced his backing of new LNG projects in Western Australia. This is needed to meet the global demand for gas, he says. Pitt expects this demand to come from Asian countries.1

In the same month, the International Energy Agency (IEA) released a report. The world must have net-zero greenhouse gas emissions by 2050, said the agency. Otherwise, the Earth’s temperature could rise by a dangerous 2.1℃ by 2100. The IEA believes that it is still possible to prevent this from happening. But the world’s energy economy must be built on solar and wind power – not fossil fuels, like coal, gas and oil. Therefore, no government should approve new fossil fuel projects.2

So, why is Australia’s government still a fan of LNG. Furthermore, how will this affect Australia?

What is LNG used for?

LNG is chilled natural gas. Liquefying natural gas makes it easier for natural gas facilities to store the fuel. It is especially useful for transportation.

Asian countries import the most LNG in the world. This is mainly due to the region’s lack of pipelines. For this reason, Asian countries cannot import natural gas. As a result, the LNG trade is thriving. The gas industry uses special ships to transport LNG there. To use the LNG as fuel, these countries must turn it back into gas. Then, they use it to generate electricity, for example.3

We should not consider LNG to be clean energy. The main reason for this is that the LNG industry releases a lot of greenhouse gases. When we burn natural gas, this causes greenhouse emissions. The LNG process to export natural gas almost doubles these emissions. This process involves extraction, transport, liquefaction and re-gasification. 14 per cent of these emissions are methane. The LNG industry deliberately releases and leaks this greenhouse gas during extraction and transport.4

Natural gas is mostly methane.5 We do not want almost double these emissions. The substance does not stay in the atmosphere as long as carbon dioxide. However, it heats the Earth a lot more. Over 100 years, methane has 34 times the heating power of carbon dioxide. Over 20 years, it traps 86 times more heat.6

A 2021 UN report highlighted methane as a highly potent greenhouse gas. Therefore, the report recommends that we do not increase our use of natural gas. Any increase would not allow us to keep global warming below 1.5ºC. This is the goal of the international Paris Agreement.7

Some scientists suggest that we use technology to pull methane out of the air. For example, one proposed process is similar to the direct air capture of carbon dioxide.8 This would allow us to increase our use of natural gas.

However, these technologies are still unproven.9 Despite this, the Australian government has bet on technology to remove greenhouse gases. It will spend AUD $263.7 million over 10 years to fund it.10 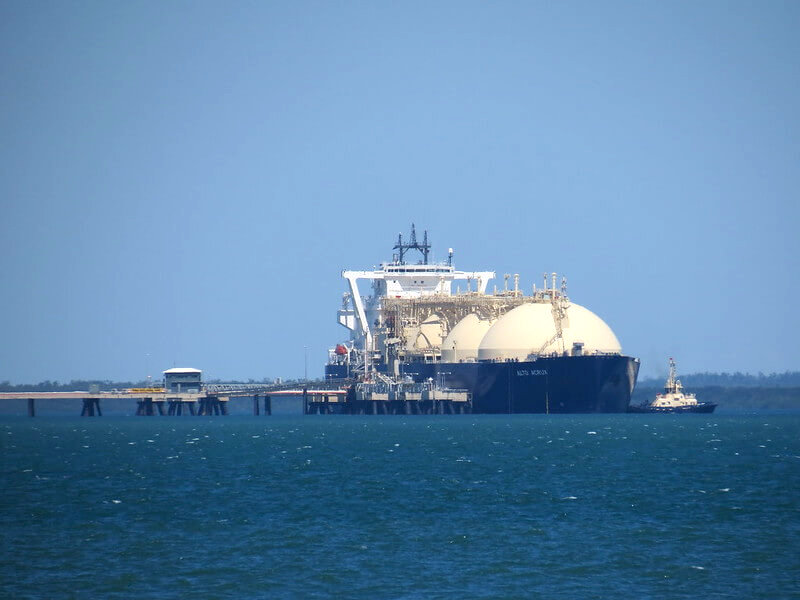 “LNG Carrier Alto Acrux” by kenhodge13 is licensed under CC BY 2.0

In 2019, energy analysts said that the LNG industry plays a significant role in climate change. If all planned LNG projects went ahead, this role would be at least as big as coal’s role.11

The impacts of climate change are already clearly visible in Australia, The Commonwealth Scientific and Industrial Research Organisation (CSIRO) stated in 2011. That is Australia’ scientific agency.12 Climate scientists view Australia as especially vulnerable to the climate crisis. This is because Australia is already a hot and dry country. Climate change only makes this worse.

Climate change lengthens the fire season, and it makes bushfires more extreme. Furthermore, an unsteady climate affects farmers. It makes it harder for them to grow crops or look after their animals.13

It can be hard to imagine living in a future with climate change. That is why National Geographic created the Your Climate, Changed tool. It allows you to see how your city will change over the next 50 years. For example, the website predicts that the Gold Coast may become a tropical savannah in 2070. In Perth, there were eight days over 35°C in 2008. This may increase to 42 days in 2080.14 These are frightening predictions. They show us why Australia must immediately stop investments in new LNG projects.

Australia has vast natural gas reserves. Therefore, it is easy to see why the gas industry would like to continue to profit from them. In Australia, we use natural gas to create electricity quickly. This is needed when our electricity demand is high. But energy experts say that Australia will not need natural gas to generate electricity in the future. Instead, solar and wind power will replace it. This will be cheaper and cleaner. Also, it could make natural gas commercially unviable in a decade. Therefore, the government has taken a big risk by investing in the fuel.15

These investments would become stranded assets. These are investments that do not make an economic return. Usually, this is due to technology, regulatory and/or market changes.16 This risk extends to investment in Australia’s LNG export industry.17

LNG exports to Asia at risk

Resources Minister Pitt expects Asia’s demand for natural gas to rise.18 It is true that Australia’s three biggest LNG customers are in Asia. These are China, South Korea and Japan. However, these three countries also have net-zero greenhouse emissions targets. As noted above, the LNG industry is a big emitter. Consequently, these countries will likely reduce their LNG imports.19

New LNG markets in Asia are not immune to this risk as well. For example, investors in LNG in the Philippines are also exposed stranded assets. They could lose up to USD $14 billion, say energy experts.20

Read more about the climate goals of China, South Korea, Japan and the Philippines. 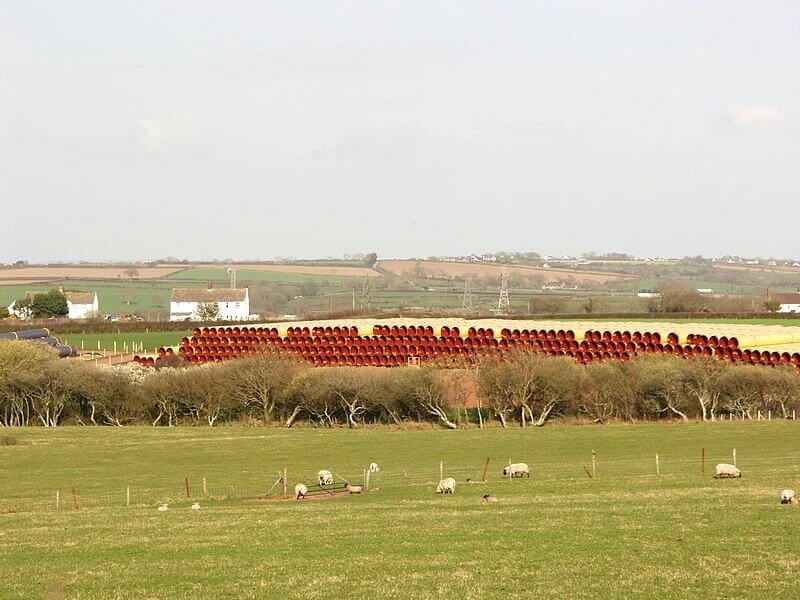 “Stacked pipes at LNG pipeline construction” by Agathoclea is licensed under CC BY-SA 3.0

Since 2015, wholesale natural gas prices have been linked to LNG export prices. That is due to the Australian gas industry greatly expanding its LNG exports. Nowadays, the industry only sells 25 per cent of the natural gas it finds in Australia’s eastern states to Australians. Instead, gas producers export most of this natural gas as LNG. Consequentially, since 2015, east coast wholesale gas prices have risen a lot. This trend will continue as long as exports continue, according to the Reserve Bank of Australia.21

Australia still has about 20 years of natural gas supply. That is based on how much we use the fuel now. Therefore, we do not need to find or produce any more gas.22 This is especially the case because we will use even less gas in the future.23 However, there is one reason why Australia might need to produce more gas. That is if the natural gas industry decides to increase LNG exports. This would take even more natural gas away from Australia.24 Due to this possibility, Australia plans to increase the amount of LNG it imports.25

In 2020, Australia’s competition regulator recommended that the government invests in import terminals.26 Accordingly, the 2021 budget allocated millions of dollars for such a project.27 Indeed, this would increase the supply of natural gas. But, it would cost the natural gas industry a lot of money. Therefore, this imported gas would likely be expensive for Australians.28 On top of this, it would cause even more greenhouse emissions.29

To be clear, Australia must only import LNG because it exports so much.30 Australia is already the world’s number one exporter of LNG.31

Export renewables rather than LNG

The IEA calls for a global energy economy based on renewable power.32 Australia could play a major role in this. In fact, Australia could become a “renewable energy exports powerhouse”. All that is needed is government investment. This would boost the economy and create tens of thousands of new jobs.33 That is three times as many jobs as an investment in fossil fuel projects. These were the findings of a joint report from Ernst and Young and WWF Australia.34

As outlined, the LNG industry will have long-lasting effects on Australia’s climate. It also has a negative impact on our energy prices. Therefore, going forward, it would make sense to wind down LNG exports. We could replace this with a renewable energy export industry.