Carmichael: Why Should We Stop the Adani Coal Mine

In December 2021, Indian mining giant Adani stated it would export the first load of coal from the Carmichael coal mine. This is eight years behind schedule, partly due to the protest efforts of environmental groups and Traditional Owners.

Earlier in 2021, the Adani Group rebranded its Australian business name to Bravus. This came most likely due to the years of protests creating negative connotations for the company. Therefore, the new name aimed to improve the public image of the mine.

What is the Adani Carmichael coal mine?

Carmichael is a thermal coal mine. Indian mining conglomerate Adani built the mine in the Galilee Basin in Central Queensland. Both the federal and Queensland governments have approved the project. The Indian company first bought the land where the mine is located in 2010.

Where is the Adani mine located?

The Carmichael Mine is located in the North Galilee Basin. That is around 300 km from the Queensland coast and close to 160 km northwest of Clermont in regional Queensland.

How big is the Adani mine and rail project?

The Carmichael coal mine measures 447 km2. On top of this, there is a 189 km rail project attached to the development to transport the coal.

What is the purpose of the Adani coal mine?

Adani exports the coal from the Carmichael mine to supply electricity to India and nations in Southeast Asia, according to the company. Adani initially planned to extract about 60 million tonnes of coal per year from the mine. This would have made it the biggest coal mine in Australia and even one of the largest in the world.

However, planning and regulatory processes have reduced the proposed size of the mine drastically. Now finished, Carmichael produces 10 million tonnes of thermal coal annually, claims Adani. However, documents the company submitted to the Queensland government show that it still intends to expand production to 55 million tonnes of thermal coal yearly.

Impact on the Great Barrier Reef

Despite its distance from the coast, the mine will also have a direct impact on the Great Barrier Reef. This is because the coal is exported to India from a shipping terminal on the Queensland coast at Abbot Point. This is close to the reef. Therefore, this increases the risks of collisions, spills and coal dust harming corals.

Greenhouse gas emissions from the Adani coal mine

Why would it emit so many greenhouse gas emissions?

The Adani coal mine would emit greenhouse gas emissions simply because coal is a fossil fuel. In 2018, 89 per cent of global carbon dioxide emissions came from fossil fuels and industry. Coal is the most polluting fossil fuel. This makes it responsible for over 0.3°C of the 1°C increase in global average temperatures since the Industrial Revolution. In other words, coal is the single largest source of global temperature rise.

Why should we stop Adani?

The #StopAdani campaign comprises 70 local groups who stand against the Carmichael coal mine. This makes it “one of the biggest people-powered campaigns in Australian history”.

The #StopAdani campaign website lists several damaging effects of the Carmichael coal mine. Apart from greenhouse gas emissions and risks to the Great Barrier Reef, the campaign says the mine will: 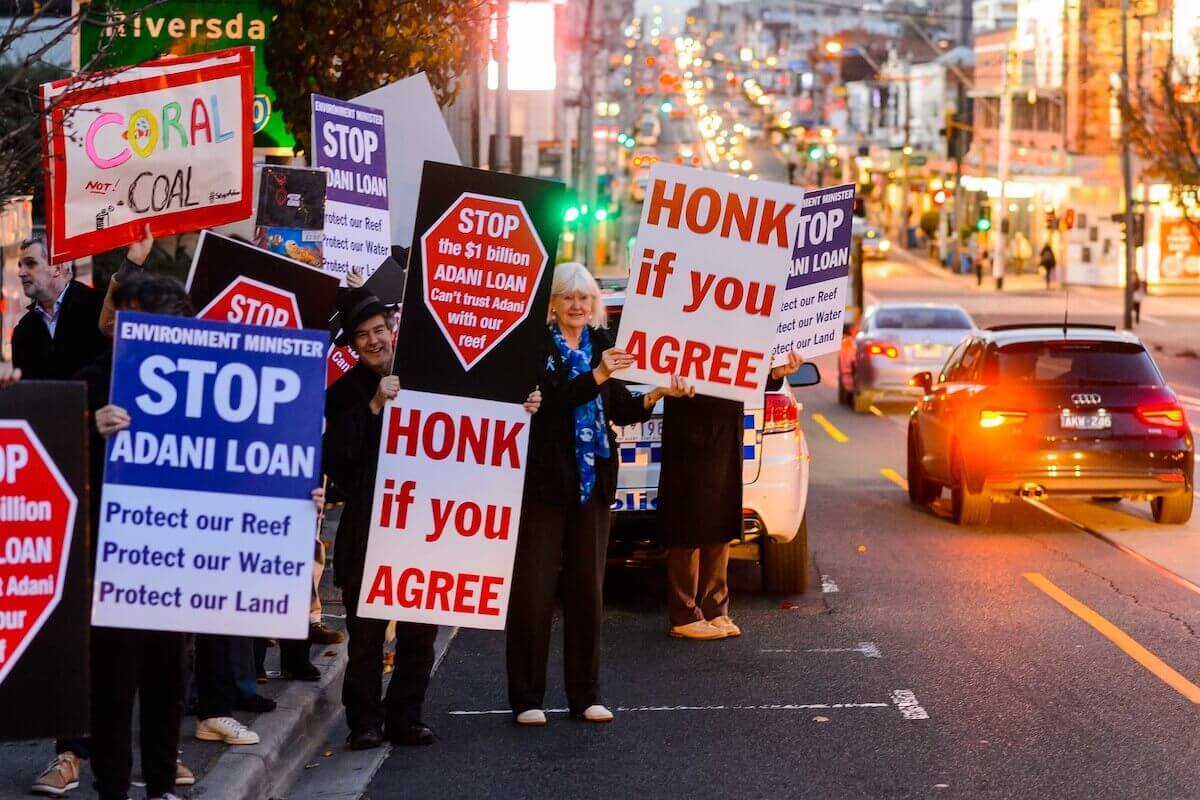 The financial risk of the Adani coal mine

In 2022, researchers published a study that suggested it was “highly implausible” that Adani’s Carmichael coal mine would be profitable. In fact, no mines in the Galilee Basin would be economically viable in the long term, the report found. This means fossil fuel investments in the region would likely end up as stranded assets according to the researchers.

This provides a broad lesson for the Australian government that coal export projects are “everything else but a safe bet”, say the study’s authors. Therefore, a better path would be to reduce fossil fuel dependency while the sector generates income. This could then be used to help support “just transition efforts”. This is critical because “a decline in coal production will inevitably be associated with a reduction in jobs in Australia”, suggested the study.

What are the plans for fracking near Adani’s Carmichael coal mine?

In 2019, Australian company Comet Ridge announced plans to begin fracking close to the Adani Carmichael mine. One of the two sandstone gas wells was just 35 km from the Adani site. The gas company planned to frack so-called exploratory wells. This involves drilling in the hope of finding a new source of natural gas.

Comet Ridge’s planned fracking activities came despite warnings from federal government studies that this could affect water resources in the Galilee Basin. On top of this, environmental groups raised concerns fracking for gas would only increase the risks to groundwater from coal mining in the region.

In September 2019, Comet Ridge confirmed natural gas in the wells. However, as of 2022, the company is still completing technical work to secure long-term permits for fracking from the Queensland government.

With such large-scale fossil fuel projects underway in Australia, it is worth remembering that these will lead to climate devastation. In 2021, the International Energy Agency declared that “no new gas, oil or coal development could take place” from that year onwards “if the world was to limit global heating to 1.5°C.