Eight Torres Strait claimants have won their historic fight against the Australian Government for its climate inaction. In a ground-breaking decision, the United Nations (UN) Human Rights Committee found Australia failed to take measures to protect indigenous Torres Islanders against the threats of climate change, for example, by upgrading seawalls and reducing greenhouse gas emissions. Australia’s failures “violated their rights to enjoy their culture and be free from arbitrary interferences with their private life, family and home”, the UN found.

The landmark decision has made legal history. It obliges the government to take action to ensure the safe existence of the Torres Strait Islands and communities. Furthermore, it sets a precedent for the rights of Indigenous Peoples facing climate impacts around the world.

Claimant Yessie Mosby from Masig Island said that “I know that our ancestors are rejoicing knowing that Torres Strait Islander voices are being heard throughout the world through this landmark case. Climate change affects our way of life everyday. This win gives us hope that we can protect our island homes, culture and traditions for our kids and future generations to come.”

Claimant Nazareth Fauid said that “This is about protecting our culture and identity. Our people living in the low-lying islands have been struggling and suffering because of climate change and the decisions of others.” “We are now celebrating history in the making. This is for future generations so that they won’t be disconnected from their island homes of the Torres Strait.”

This decision paves the way for others to challenge national failures to protect frontline communities, said UN committee member Hélène Tigroudja. “States that fail to protect individuals under their jurisdiction from the adverse effects of climate change may be violating their human rights under international law”, Tigroudja added. 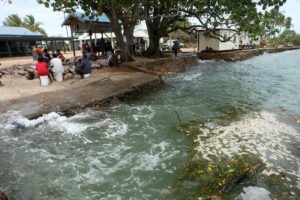 The Torres Strait 8 claimants and their islands

The group of eight claimants and Traditional Owners from Zenadh Kes (Torres Strait Islands) are known as the Torres Strait 8. Torres Strait Islanders have lived with a “deep connection to land, sea, sky and culture for over 60,000 years”. However, they are now on the frontline of climate change. Specifically, rising sea levels, increasing extreme weather events and coastal erosion affect the 18 inhabited islands in the region. This threatens the culture and sacred way of life of many communities. Without urgent action, many Zenadh Kes people fear that climate impacts could make their islands inhabitable within their lifetime.

In their complaint, the Torres Strait 8 claimed that climatic changes, such as rainfall and saltwater intrusion, have degraded land and damaged access to traditional food sources. Furthermore, severe flooding has destroyed family graves. Maintaining ancestral graveyards and visiting and communicating with deceased relatives are at the heart of their cultures, they argued. In addition, important ceremonies are only culturally meaningful if performed in the community’s native lands.

In 2020, Yessie Mosby explained in the Guardian why protecting the Islands and ancient way of life is vital to his community: “My genealogy, my ancestors, my family tree lies here. This island is my library, my school and my storyteller. It’s love, it’s life, and it’s ancient. There is a mythical, spiritual aura around this place. We are not migrants to this sacred land, we have lived here for generations.” 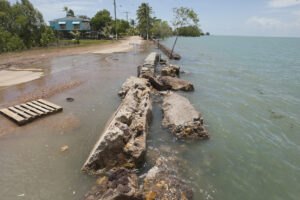 Australia should compensate for harm suffered

The group first lodged their complaint in 2019, supported by Gur A Baradharaw Kod, a land and sea council, and represented by lawyers from the environmental non-profit ClientEarth. In 2020, the Morrison government refused an invitation to visit the islands and later called for the case to be dismissed. It claimed there was insufficient evidence that climate change affected the Torres Strait Islanders’ rights. However, following the change of leadership in May 2022, Attorney-General Mark Dreyfus confirmed that the Albanese government will work with Torres Strait Islanders on climate change.

For this final decision, the UN committee took into account the Islanders’ spiritual connection to their islands and the importance of healthy ecosystems for their cultural integrity. It found that “Australia’s failure to take timely and adequate measures” to protect the Islanders from climate impacts led to the violation of their human rights. As remedies, the committee asked Australia to compensate the indigenous Torres Strait Islanders for the harm suffered. This includes engaging in meaningful consultations with the communities to assess their needs. It also comprises taking measures to secure their safe existence on their islands.

While the committee’s decision marks the final stage of this case, the Torres Strait 8 have vowed to continue their campaign. The Our Islands, Our Home petition, launched in 2019 at the beginning of the case, is building community support. It urges the Albanese Government to adopt the five demands of the campaign and protect Zenadh Kes from climate damage. These include a rapid transition from fossil fuels to limit warming and more funding for climate adaptation for Zenadh Kes. “This is not the end”, said Mr Mosby. “We must hold the Australian government accountable and keep fossil fuels in the ground to protect our island homes.” 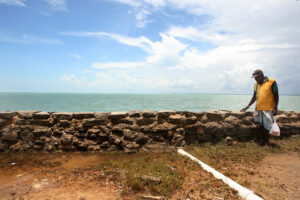