At the end of September, the Queensland Government unveiled the state’s plans to shift to renewable energy and close all its coal generators by 2035. This includes a multi-billion dollar energy and jobs initiative to cash in on its clean industry potential. As a result, the state would generate eight times more renewable energy in 2035 than today, according to the announcement. This is a significant shift for the country’s most coal-dependent state.

Queensland’s announcement was quickly followed by the country’s biggest polluter, AGL Energy, also pledging to exit coal entirely by 2035. Most significantly, this includes a commitment to close the nation’s most emissions-intensive power station – Loy Yang A in Victoria’s Latrobe Valley – ten years earlier than planned. The facility is Australia’s single dirtiest power station, emitting 17 million tonnes of climate-heating greenhouse gases every year. AGL also confirmed its Bayswater coal facility in the Hunter Valley is on track for closure before 2033, reaffirming its commitment made in February.

The announcement is the latest evidence that many coal power stations will close sooner than current company plans, said Greg Bourne, Climate Councillor, energy expert and former President of BP Australasia. “Coal is unable to compete on cost with renewable energy, it is also inflexible, ageing, unreliable and inefficient”, said Mr Bourne. “In Australia, and globally, renewables backed by storage deliver the cheapest power, and do so without the greenhouse emissions coal and gas produce.”

Importantly, this move away from coal and towards renewables also has coal plant workers on board — a vital element of the just energy transition. “If there was still any doubt within the workforce or community that we are getting out of coal, this proves we are”, said Tony Wolfe, Senior Plant Operator at Loy Yang A coal power station. “Pressure will be on to bring this date forward even further so we need to embrace the multi-billion dollar renewable industry that’s coming our way so that we can retain our rightful place as an electricity generation hub”, he added. 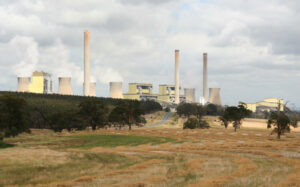 In 2021, coal still dominated Australia’s electricity supply, contributing 51 per cent nationally. However, the country has a target of generating 82 per cent of its electricity from renewable sources by 2030. This means the rapid decommissioning of coal is an inevitable part of this transition.

In June 2022, the Australian Energy Market Operator (AEMO) released its roadmap for Australia’s transition to clean electricity, which also found coal-fired generation was retiring faster than expected. Its modelling predicts that 60 per cent of capacity will withdraw by 2030 — and all coal generation will end in Australia by 2043. “Competition, climate change and operational pressures will intensify with the ever-increasing penetration of firmed renewable generation”, the AEMO report stated.

While the timeline for Australia’s coal plant retirements becomes ever clearer, proposals for new coal mines in the country remain a severe obstacle to reducing global emissions and achieving net-zero emissions. Analysis shows that Australian companies are planning new coal mining capacity of almost 300 million tonnes per year. This is in complete defiance of global climate goals.

Much of Australia’s new coal capacity is for exporting and burning abroad, locking in decades of emissions from the world’s dirtiest energy. But even before burning, the operations of these coal mines would have a vast climate and environmental footprint in Australia. For example, coal mines emit vast amounts of methane – a super-polluting greenhouse gas that is 80 times more climate-damaging than carbon dioxide (CO2) over a 20-year period. Methane emissions from Australia’s mines reached 1.8 million tonnes in 2021. This threatens the government’s legally binding 2030 target of 43 per cent emissions reduction. Moreover, this target is already weak, said Dr Sabina Assan from the thinktank Ember. Globally, coal mine methane emissions have a climate impact comparable to all CO2 emissions from coal plants in China.

In 2021, the International Energy Agency’s message was clear: “no new coal mines” for a safe future. Australia’s early coal closures are a leap forward in Australia’s domestic energy transition. However, the country’s dirty coal export industry – which is almost twice as climate-polluting as Australia’s national emissions – risks obliterating these climate gains at home.