The Australian Energy Market Operator’s (AEMO) latest report shows that Australia’s transition to net zero is accelerating faster than expected. The rapidly falling costs of renewable energy alongside early coal closures are driving this progress. Furthermore, investors have increased focus on climate, environmental, social and governance considerations, which has also contributed to this positive performance of Australia’s net zero transition.

The AEMO’s 2022 Integrated System Plan (ISP) is a comprehensive roadmap for the National Electricity Market (NEM). It offers an optimal pathway for the net zero energy transition, which will provide reliable, secure and affordable clean power to consumers. “As the global economy gathers pace towards its net zero future, countries that have excess low-cost renewable energy will be at a distinct advantage. Australia is extremely well-positioned to be one of those countries, with options to export that energy, or use it in industrial production or for energy-intensive digital industries”, states the 2022 ISP.

Climate Council Senior researcher Tim Baxter welcomed the report. “The adoption and transition of renewables will bring immense opportunity to Australians in terms of creating jobs, lowering emissions and ensuring security to our power supply. This transition is essential to protecting Australian lives”, he said.

“Off the back of an energy crisis where Australians are being forced to rely on ageing and unreliable coal plants and expensive gas, it’s critical we get the transition right and move away from fossil fuels to avoid the worst impacts of climate change”, Baxter added. 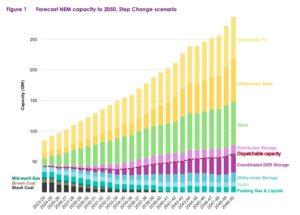 The AEMO outlines the future of renewables

The 2022 ISP also outlines the conditions required to facilitate the continued transition to net zero. For this, there is a need for significant investment in clean energy infrastructure. This includes a nine-fold increase in utility-scale variable renewable energy (VRE) capacity, a near five-fold increase in distributed solar photovoltaics (PV) and 10,000 km of new transmission. It also highlights the need for 46GW / 640GWh (gigawatt hours) of dispatchable storage in the forms of batteries, pumped hydro or alternative storage by 2050. This is to manage daily and seasonal variations in fast-growing solar and wind output.

Furthermore, investment in human and social capital will also help deliver the intended benefits to Australian consumers, outlines the report. This includes engaging with landholders and regional communities to collaborate on solutions to earn lasting social licence. In addition, continuing the collaboration between the energy sector and its regulators, governments and communities along the transition pathway.

A successful transformation of the NEM would deliver low-cost renewable electricity with reliability and security, help meet regional and national climate targets, and contribute significantly to regional jobs and economic growth, according to the report.

“The scenarios mapped out by AEMO also show that we can push for higher ambitions to transition even sooner than predicted”, said Bourne. “In a time of energy crisis and also seeing the consequences of a warming atmosphere, Australians want to see renewable power and storage to reduce energy prices, insulate against global energy price shocks and help avoid the worst effects of climate change.”

The 2022 ISPs Step Change scenario – the most probable transition pathway as identified by energy market stakeholders – predicts renewable generation would rise from approximately 28 per cent in 2020-21 to 83 per cent in 2030-31. This is consistent with the government’s current emission reduction policy.

However, Climate Action Tracker has found that the Labor government’s current policy is “Insufficient” to meet the Paris Agreement, and it does not align with the emissions pathway that limits warming to 1.5°C. This suggests that while the 2022 ISP shows Australia’s transition is happening faster than expected, this is arguably because the underlying benchmark is weak. For example, using the latest science, the Climate Council recommends that Australia transitions to 100 per cent electricity generation by 2030, with net zero emissions nationwide by 2035.

Furthermore, the current global cost of living crisis is a cost of the fossil fuel crisis. Spiralling inflation and associated fall in living standards are “almost entirely” due to our widespread reliance on fossil fuels. This is not just for electricity generation, but also for transport, food production, industry and buildings. Therefore, the same level of innovation, investment and ambition must be applied to decarbonise all these economic areas. To achieve this, ending fossil fuels as rapidly as possible is the most effective way to safeguard our economies and communities in the future.