In a flurry of announcements, we have seen Australian sports stars and teams take a stand against fossil fuel and mining sponsorship this month. This is amid a growing awareness and evidence that the climate crisis is already here, gravely threatening the sports industry itself. The industry has as much responsibility as any other to reach net-zero emissions by 2050. Therefore, climate change activists are needed in the sector. Cutting ties with companies that cause climate and ecological harm is a fundamental step for sports to contribute to the fight.

Reports emerged on 18th October that cricket star Pat Cummins said that he would no longer feature in promotional material for the super polluter Alinta Energy. Cricket Australia then pulled out of a AUD $40 million dollar sponsorship deal with the company.

Cummins is one of Australia’s most influential sports figures and a committed climate advocate. In February 2022, he launched Cricket for Climate, an organisation encouraging local clubs to mobilise towards net zero. Writing in The Guardian the same month, Cummins said that “Global warming is already wreaking havoc on our sport… It is the responsibility of us all to leave this planet in better shape for future generations.”

“The reality is, the impact of climate change on sport, our way of life and the legacy we leave for our kids will continue to worsen if we don’t take action now”, he added.

October also saw a group of high-profile Fremantle Dockers fans call on the club to dump oil and gas giant Woodside as its key sponsor. This group included ex-player Dale Kickett and the inaugural football manager, Gerard McNeill. Their open letter stated that it was no longer appropriate for the club to receive fossil fuel money while the climate crisis grips the planet. 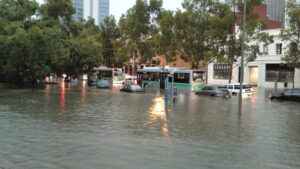 The announcements are part of a broader movement of Australia’s sports industry taking action on the climate crisis. For example, the Australian network The Cool Down encourages sports figures to incorporate climate and environmental solutions into their practice to contribute to global efforts to meet net zero.

Its website states that it recognises the existential threat the climate crisis poses to the sector’s future. The US-based Green Sports Alliance (GSA) is another organisation that focuses on making the industry more sustainable. Accordingly, the areas they are advancing include lower carbon energy use and transportation, waste reduction and sustainable food. The GSA says that it aims to safeguard a healthy, sustainable world for current and future generations.

There is a broader and growing trend of cultural institutions cutting ties with polluters, with arts and music entities also ditching fossil fuel affiliations this month. Specifically, a group of philanthropists, artists and First Nations representatives offered AUD $200,000 in funding to Darwin Festival. This offer came on the condition that the festival dropped the sponsorship from oil and gas company Santos. Santos has now duly withdrawn as a sponsor, ending a 20-year partnership. Earlier in the month, Perth Festival also announced that it would cease its decades-long sponsorship deal with oil and gas giant Chevron. This comes after a four-year campaign that warned the festival was helping to “greenwash” the company.

The rapid shift in public mood suggests that fossil fuels are well on their way to becoming the new tobacco. These announcements are the latest in a marked trend of public figures, institutions, events and even entire cities that spurn the polluting companies that threaten our lives and future. The collective message is ringing loud and clear that fossil fuels have no place affiliating with sports, arts and other cultural entities that underpin healthy and thriving communities.