Butane vs Propane: Pros and Cons

In 2019, India became the world’s second-largest consumer of a new type of fuel: liquefied petroleum gas (LPG). The government has promoted its use across the country and has said that LPG – made from propane or butane – can transform lives. But, which is better when comparing propane vs butane?

The gases are similar in many ways but have some key differences. Proponents say that LPG is a cleaner and cheaper fuel that helps poorer people who usually use more hazardous types of energy. It is cleaner than many alternatives, including natural gas, coal and oil.

Australia is the world’s 15th biggest exporter of LPG, and worldwide demand is expected to grow. While some are excited about the prospect of rising LPG use, others are not. LPG may be cleaner, but it is still a fossil fuel that releases carbon dioxide, contributing to global warming and climate change.

Propane vs butane: What are the similarities?

Both propane and butane are light hydrocarbons and occur naturally under the ground. Both are fossil fuels, formed millions of years ago from decomposing plants and animals. 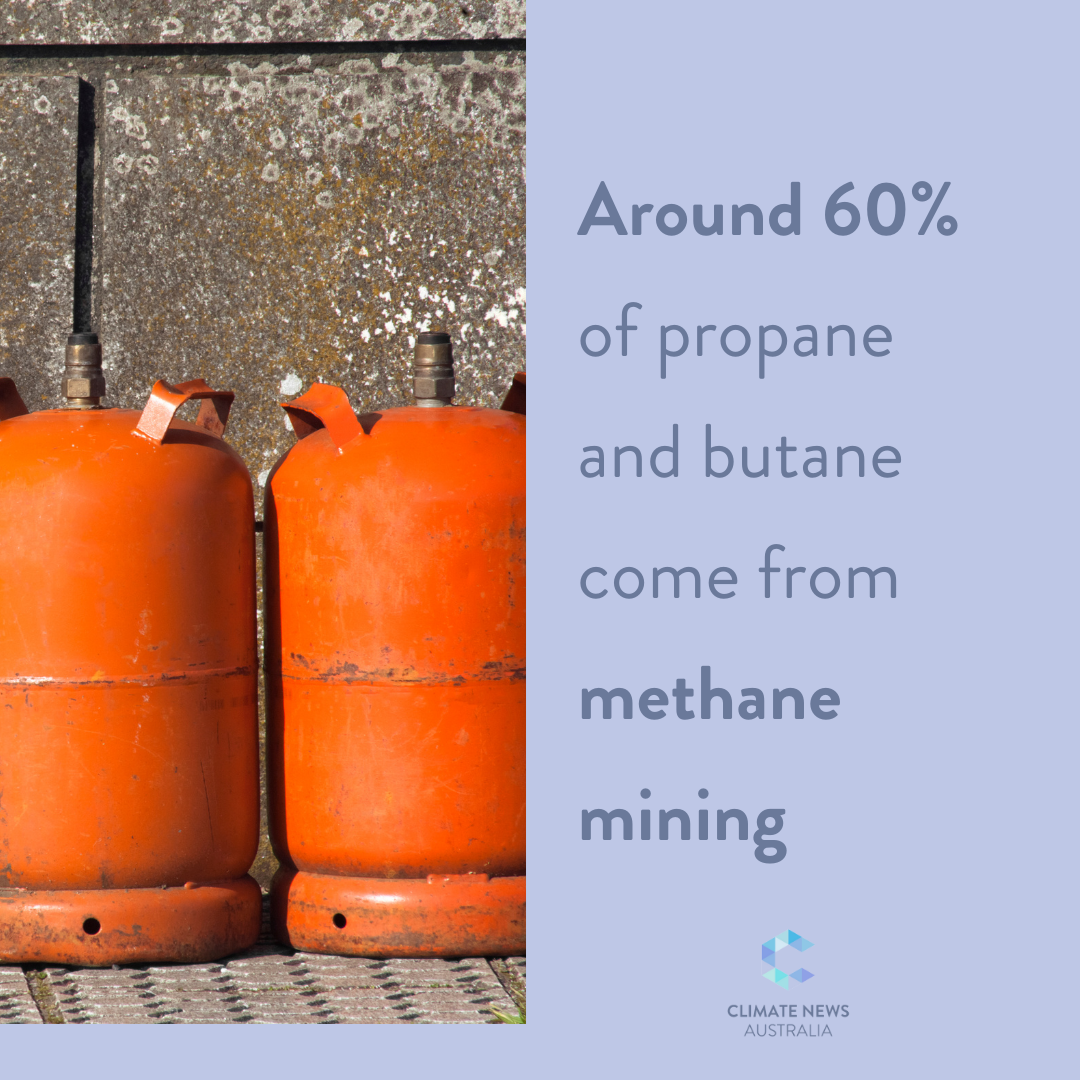 Australia is a net exporter of propane and butane. Most of its LPG comes from underground reserves when drilling for methane. Butane and propane have to be separated from methane before use. Moreover, Australia has an extensive network to transport and export LPG. Propane is the only vehicle fuel that Australia is self-reliant on.

The process of extracting propane and butane is the same. Other gases found with them include methane, ethane, ethene, isobutene and propene. Companies remove impurities, such as water vapour, carbon dioxide and nitrogen, from these gases. Machines then process and extract each type of gas separately.

Companies store both in the same way to – in pressurised steel containers. Propane and butane reduce in volume by nearly 230 to 270 times when in liquid form. They maintain their liquid state in pressurised cylinders or tanks. Both convert back into gas when used. It is far easier to transport butane and propane as liquids than in gas form. 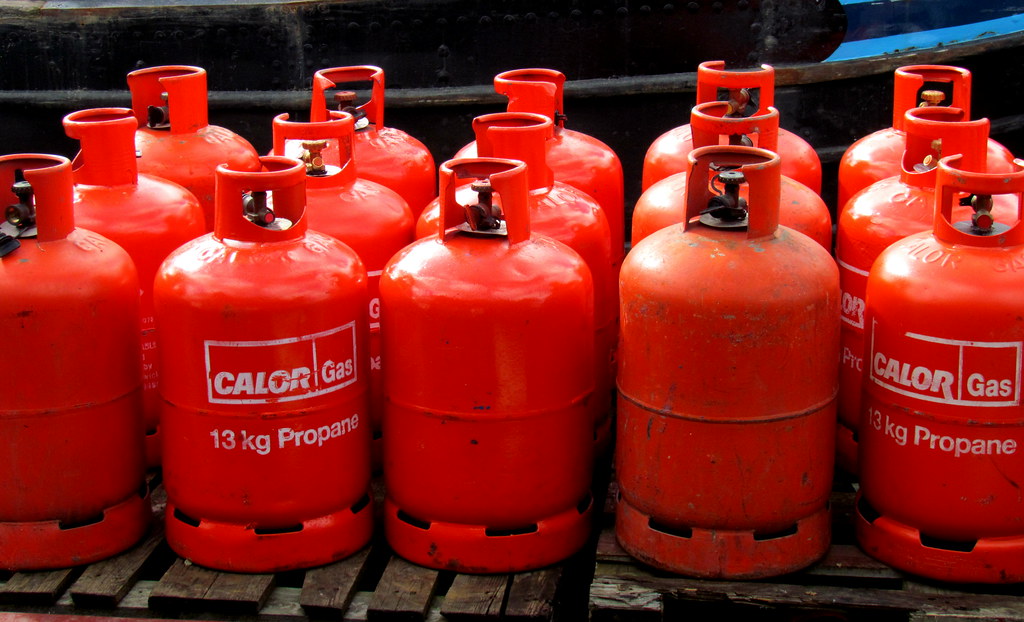 Propane vs butane: What is the difference?

However, the most important difference is with their boiling points. Propane boils at -42°C, while butane has a higher boiling point at -0.4°C. That is the point at which the liquid turns into gas, as water does at 100°C. Propane evaporates and turns into a gas at far colder temperatures than butane, in other words.

Moreover, when stored in a pressurised container, propane exerts greater pressure than butane. This is important to remember when choosing how to release pressure from a cylinder. This also makes propane better for outside storage and use. Butane also produces more energy per cubic metre than propane.

The debate over propane vs butane is somewhat moot as both are usually sold together as LPG. But, their different boiling temperatures means that they are used differently. 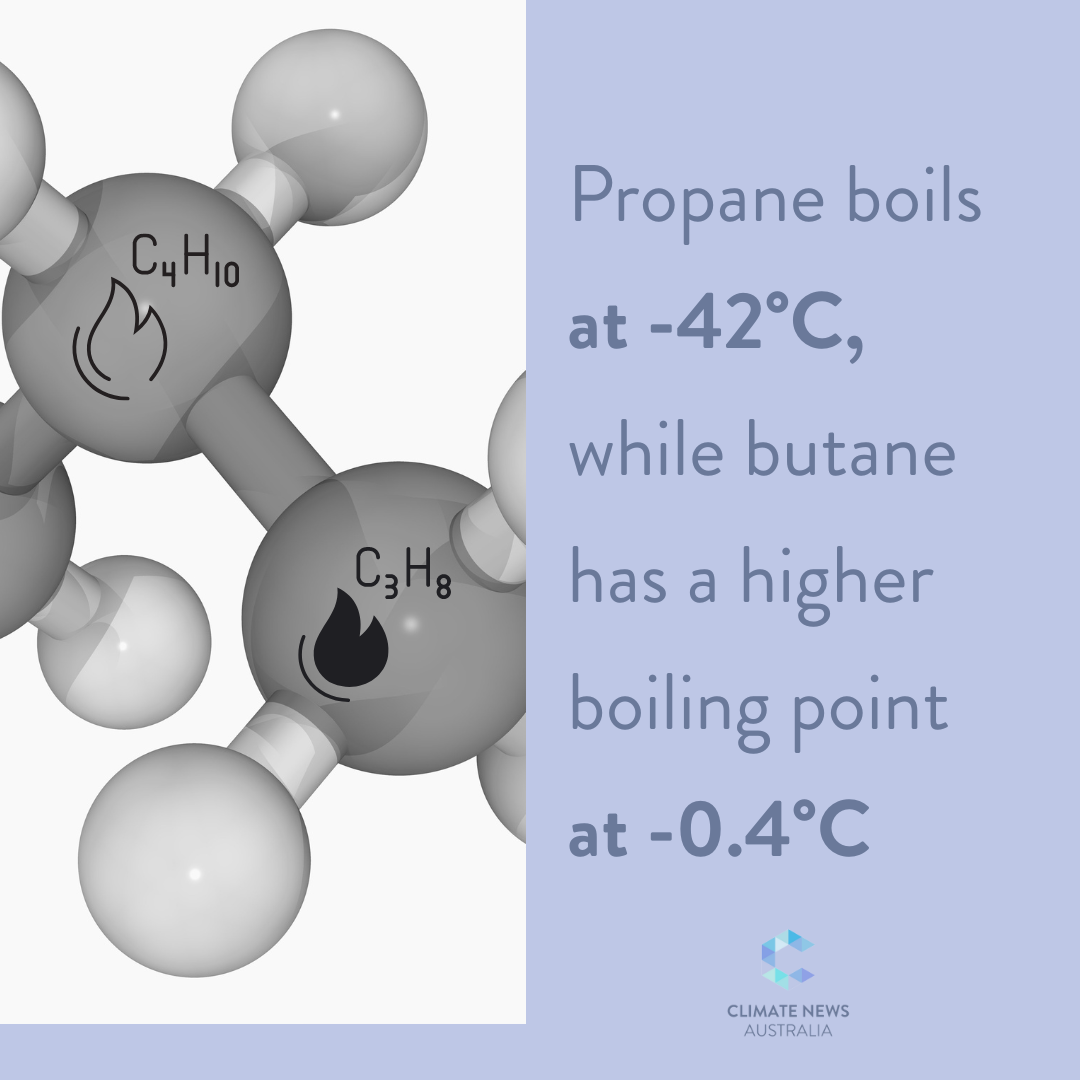 What are the uses for propane and butane?

As consumers usually buy propane and butane together (as liquefied petroleum gas), people frequently use them together. But due to their divergent boiling points, people and companies also use propane and butane in different contexts. As propane has a lower boiling point and is better suited to outdoor usage and storage, it is most useful for larger, industrial usage. This includes, for example, home heating, transportation, large kitchen cooking and commercial operations.

Australians also have another name for propane, autogas. They use it as a vehicle fuel. In fact, Australia has some of the most developed infrastructure in the world for autogas, say its proponents. Moreover, the average price of LPG is currently around 60 per cent of either petrol or diesel in the country. Yet, despite the infrastructure and price points, companies are cutting back on LPG-fuelled cars and wasting the infrastructure.

Butane turns into gas at a much lower temperature than propane. Therefore, it is more commonly used indoors or for light usage. People use it for portable mobile heaters, in addition to outdoor use in the summer, such as for camping, barbecues and other light energy use. 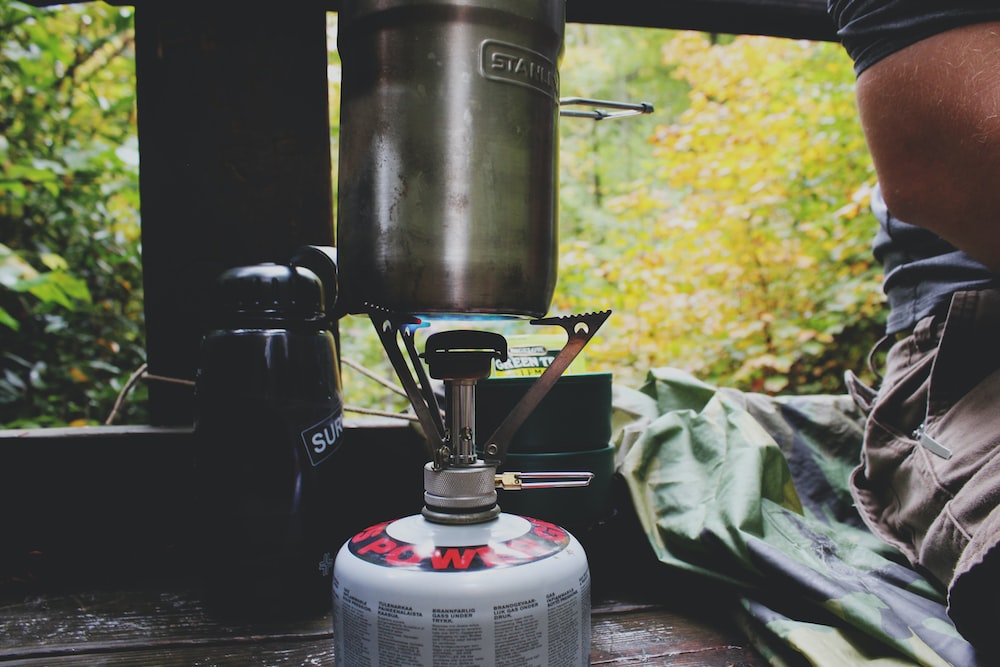 Are butane and propane better for the environment than other fuels?

Proponents say that it is far better for the environment to use propane and butane than other fossil fuels. Both fuels are non-toxic and clean-burning, and they don’t release any other gases besides carbon dioxide. They also have a lower carbon content than other fossil fuels, including oil, petrol, diesel, kerosene and ethanol. This means that they emit less carbon dioxide per unit of energy. They also have a high heating value, meaning they contain more energy per kilogram than most alternative sources.

In 2010, a UK government department found that propane and butane together, as liquefied natural gas, produce around 29 per cent less CO2 emissions than gas, oil or coal when used to produce electricity. Moreover, it is far cheaper to buy than petrol or diesel for poorer people in developing countries, like India. That makes it more attractive in countries where switching to cleaner energy will take longer and is more difficult.

Moreover, the Intergovernmental Panel on Climate Change (IPCC) says that LPG has a global warming potential (GWP) of 0. It is also not listed as a greenhouse gas. On the other hand, carbon dioxide has a GWP of 1 and methane (natural gas) of 28-36 over 100 years. The higher the GWP figure, the worse it is for climate change. With that in mind, propane and butane together as LPG is a much cleaner fuel than other alternatives. 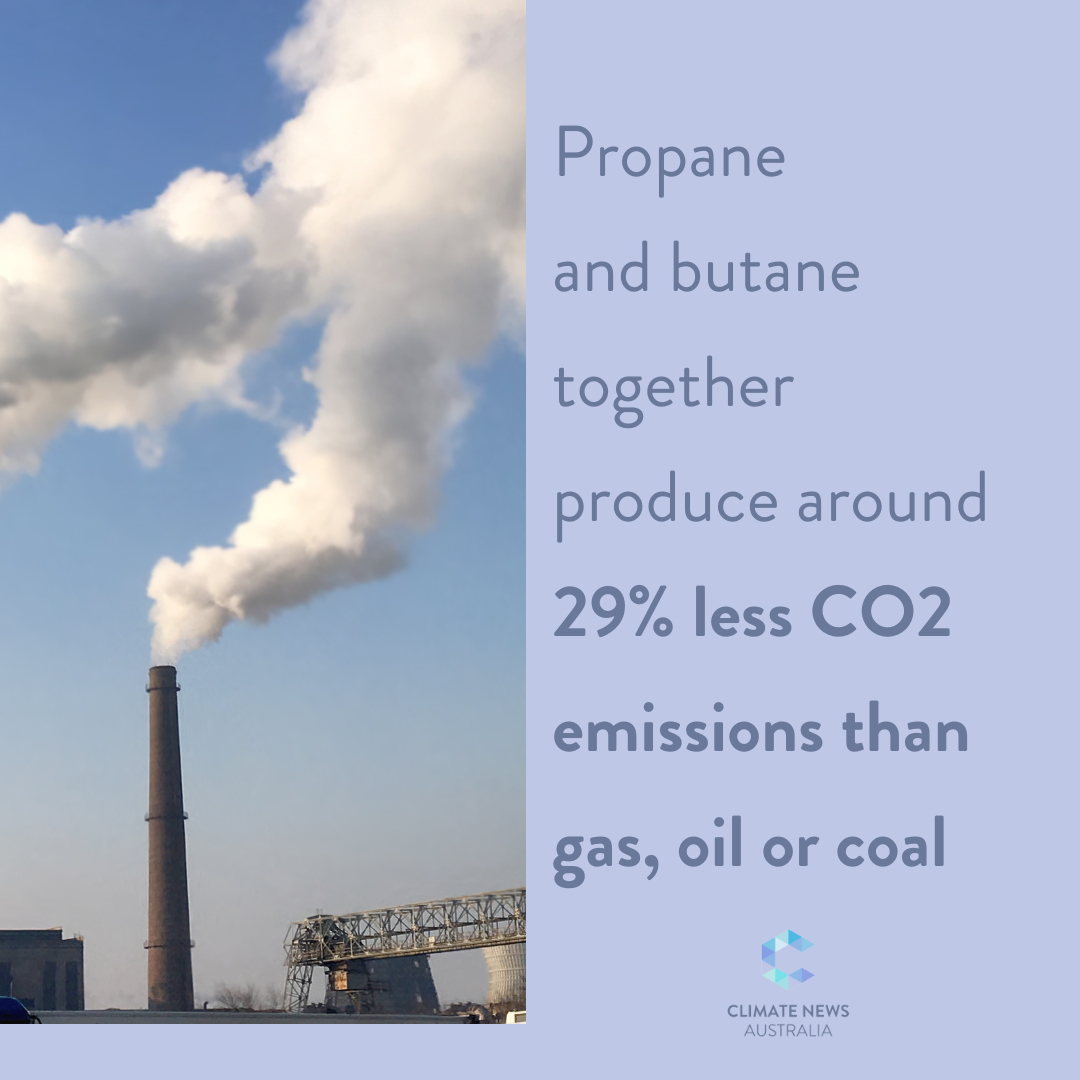 Do propane and butane release CO2?

That said, burning propane and butane for fuel or generating electricity still releases some carbon dioxide. That is still problematic for the environment. Scientists say that we should aim to reach “net zero”, where companies and people do not add carbon emissions to the atmosphere. Otherwise, we will continue to heat up the planet.

Therefore, while LPG is a better alternative to other gases, it is still not a viable long-term fuel. We should build the infrastructure for an entirely clean source of energy, such as wind and power. As of 2020, renewable energy is the cheapest source of energy worldwide. Indeed, it is cheaper to build and derive energy from wind and solar farms than to burn any fossil fuel.

Our long-term aim should be to move away from all kinds of fossil fuels regardless of how clean they are. The only sustainable form of energy is the type that produces no carbon emissions at all. 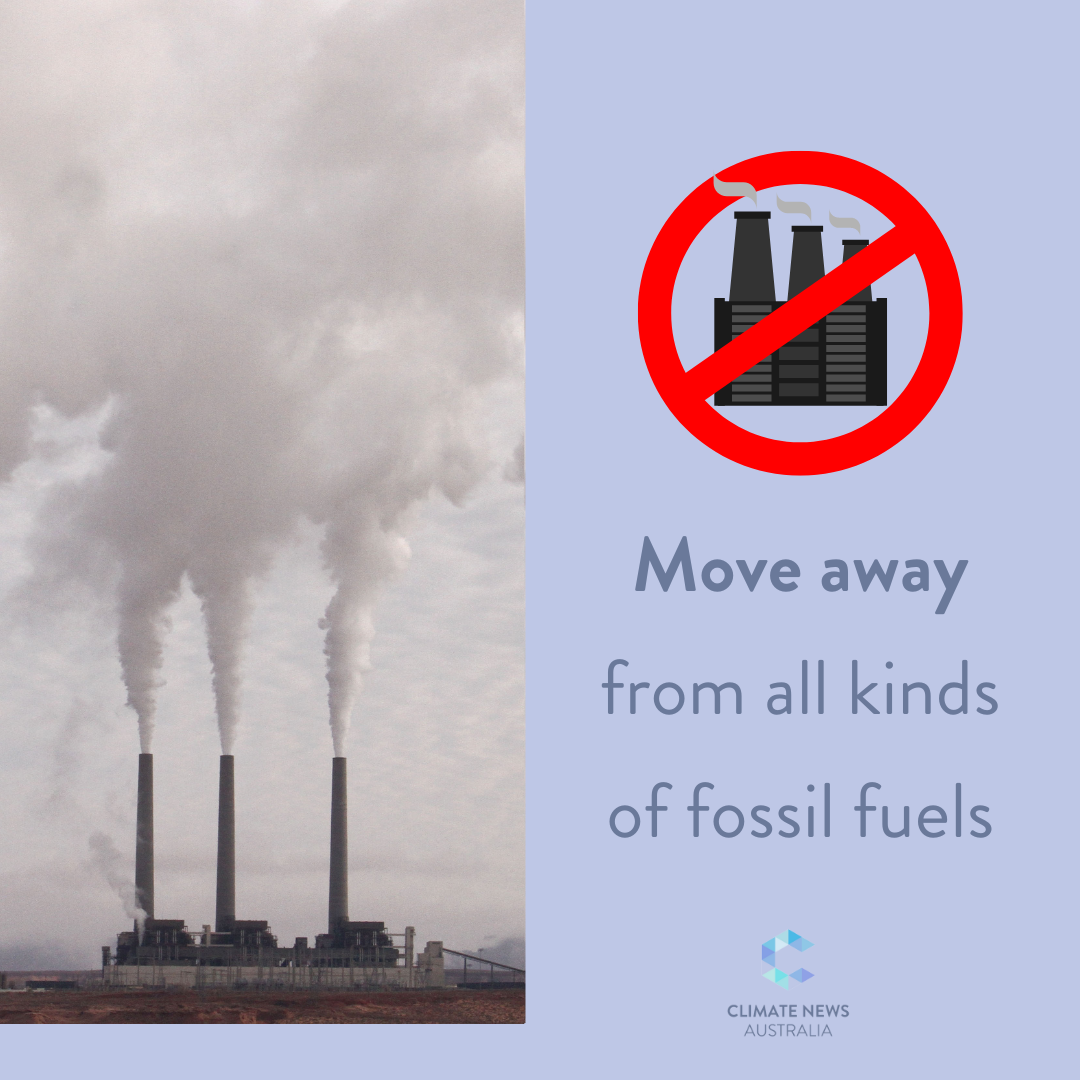