What Is Offshore Drilling and How Does It Affect Australia’s Environment?

Home » What Is Offshore Drilling and How Does It Affect Australia’s Environment?

Seventy per cent of the world’s oil and natural gas comes from onshore sites. Offshore drilling is the source of the remaining 30 per cent. The production and consumption of fossil fuels are having a profound effect on Australia’s climate because coal, oil and gas all drive global warming. However, offshore drilling is particularly problematic as the process can have calamitous environmental impacts.

Offshore drilling for oil and gas entails many risks. Most concerning, oil spills are an unavoidable possibility for all offshore wells. Incidents such as the 2009 Montara oil spill can devastate huge areas, killing marine life and damaging important ecosystems. Since the UN declared a ‘code red for humanity’, it is more important than ever to leave fossil fuels in the ground and look to clean sources of power instead. 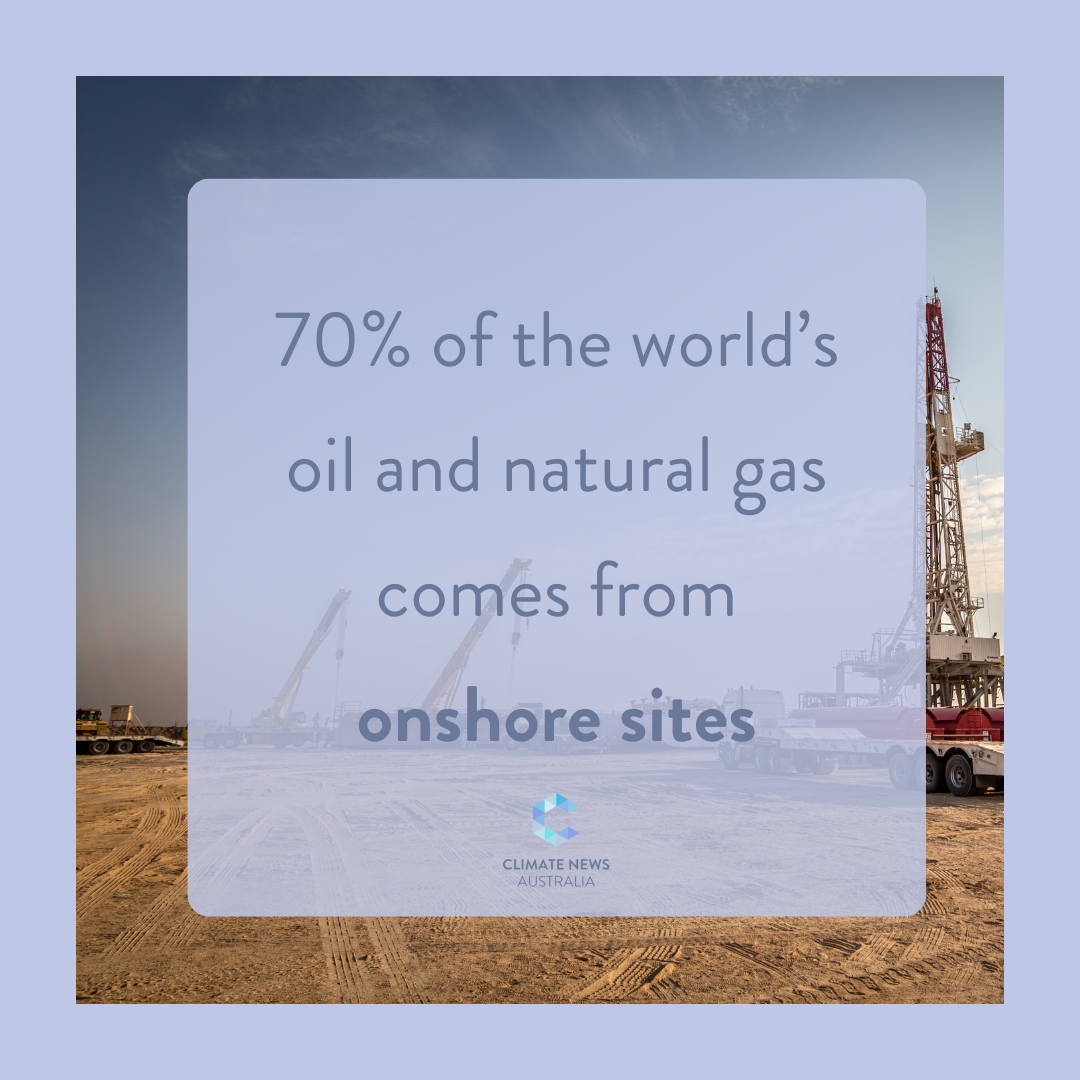 What is offshore drilling?

Offshore drilling is the extraction of petroleum and/or natural gas from reserves beneath the ocean. Extracting these fossil fuels most commonly takes place on land. But, since over 70 per cent of the Earth’s surface is covered by oceans, a large proportion of the planet’s oil and gas reserves are underwater.

Offshore drilling is much more difficult, expensive and dangerous than onshore drilling. But, fossil fuel companies are willing to risk delicate ecosystems in the neverending search for profit. Consequently, they have developed huge fixed or floating platforms to reach these remote resources.

The cost and risks of offshore operations rise as the depth of the well increases. Drilling at deeper depths involves working under greater pressure. Pressure is applied by both the weight of the water and from within the oil and gas pockets themselves. The probability of serious accidents, fatalities, injuries, explosions or fires grows by 8.5 per cent for every additional 100 feet of depth that an offshore platform operates at. That figure stands regardless of the platform’s age and the volume of fossil fuels that the well produces. 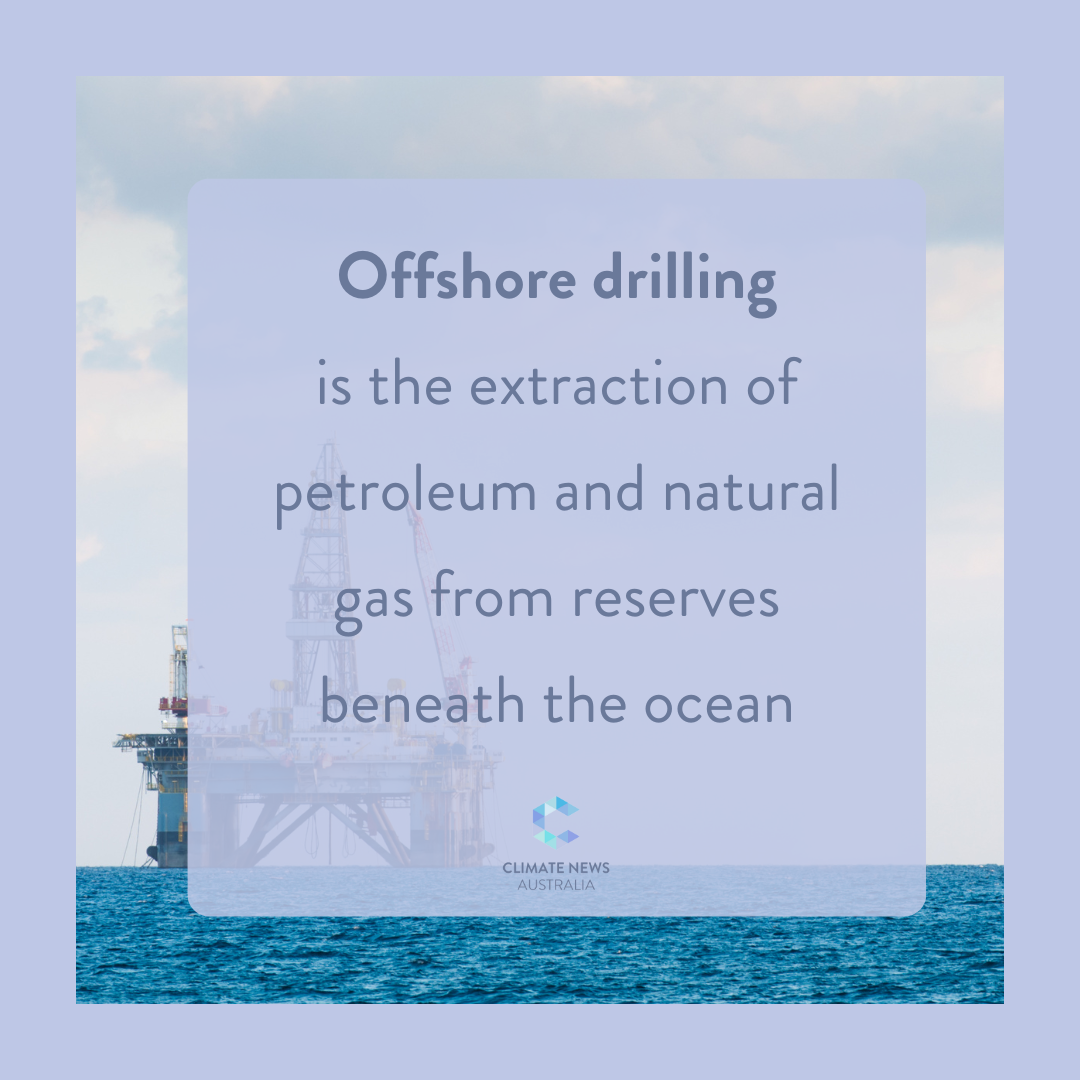 How does offshore oil drilling work?

In Australia, offshore oil and gas drilling is regulated by the Offshore Petroleum and Greenhouse Gas Storage Act 2006. It requires oil and gas companies to meet various requirements before they can commence offshore activities. For instance, they must hold the relevant permits, leases and licenses. They must also have comprehensive environment and safety plans.

Once these have been obtained, oil and gas companies begin operations by performing a seismic survey of a site they want to drill. They send high decibel signals to the ground, which bounce back and reveal areas where oil and gas exist. These surveys provide information on the geology of the field, for instance, whether it is within porous or tight rocks. But, due to the explosive nature of the impulses, they also harm and kill marine plants and animals. 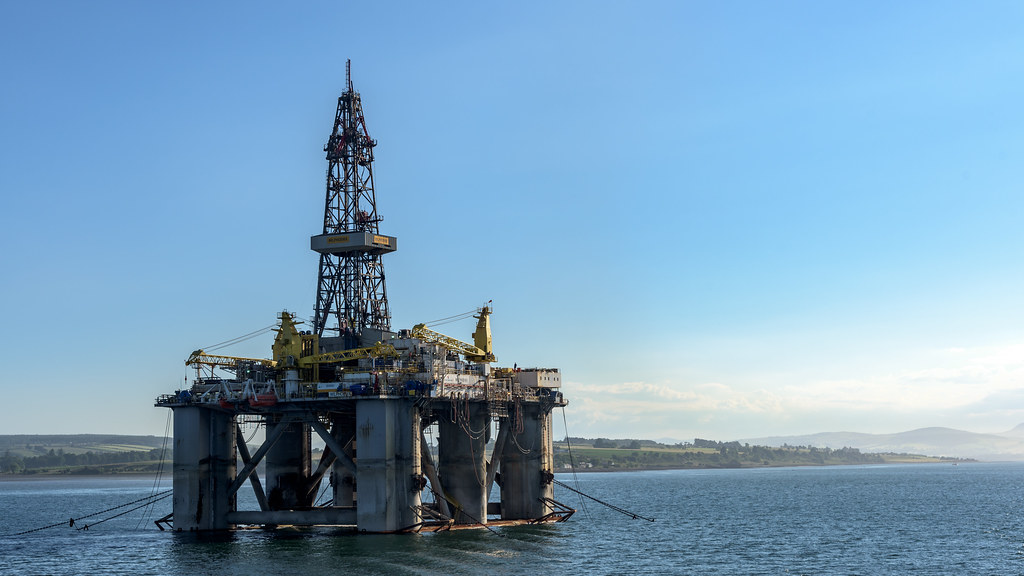 Once a suitable drilling site has been found, fossil fuel companies use a mobile offshore drilling unit (MODU) to dig an exploratory well. It can take just 15 days or as long as 12 months to install these wells. Their purpose is to take samples of the rock layers beneath the seafloor.

The type of MODU used depends on the water depth. In calm and shallow waters of 9.1 to 10.7 metres, a submersible MODU works well. In deeper water of up to 160 metres, a jackup rig with legs that extend to the seafloor is more appropriate.

Furthermore, in deeper waters, drillships or semisubmersibles may be employed. Drillships have a drilling rig on the top deck. The drill itself extends through a hole in the hull. Anchors and propellors hold the drillship in place when it is over a drill site.

Meanwhile, semisubmersibles float on the surface with the aid of huge submerged pontoons. They may have a propulsion system to allow them to navigate to drill sites independently. Others require another vessel to tow them into place. The majority use multiple anchors to help secure the structure’s orientation.

Once the MODU has taken core samples from an exploratory well, the oil or gas company will have more accurate results. With this information, they can map out the subsurface structure of the ocean floor. They can then decide the optimum location for a production well and an offshore rig.

Offshore rigs may anchor to the seafloor. Alternatively, they may use dynamic positioning to stay in place. The latter requires high tech computer algorithms to control thrusters that maintain the vessel’s location, regardless of weather conditions. Installing an offshore rig takes two to three years and costs on average USD $650 million. In contrast, a commercial-scale wind turbine of two megawatts costs roughly USD $3-4 million. Both wind turbines and oil rigs have an expected lifespan of about 25 years.

Offshore drilling requires a connected series of long drill pipes, which form a large drill string with a drill bit on the end. This spins round to dig into the Earth’s surface. As the borehole penetrates deeper into the seafloor, it sends a stream of mud to the drill bit before moving up to the platform. It serves a crucial function. The mud lubricates the drill bit, seals the wall of the well and controls the pressure inside the well.

After it is sent up to the platform, the mud is filtered before being sent back to the ocean floor. However, the drilling mud contains harmful and toxic substances. Subsequently, the areas around drilling platforms have extremely high concentrations of metals.

The drilling occurs in phases. After drilling the length of the well, a metallic casing lines its walls. Next, a packer goes down the well to expand it and ensure it is sealed. A final portion of casing – the production casing – is also installed. It ends in a cap that closes the well and permits the flow of petroleum or gas in the well to be controlled. The well is then ready to begin extracting oil and natural gas, either through its own pressure or through the use of pumps. 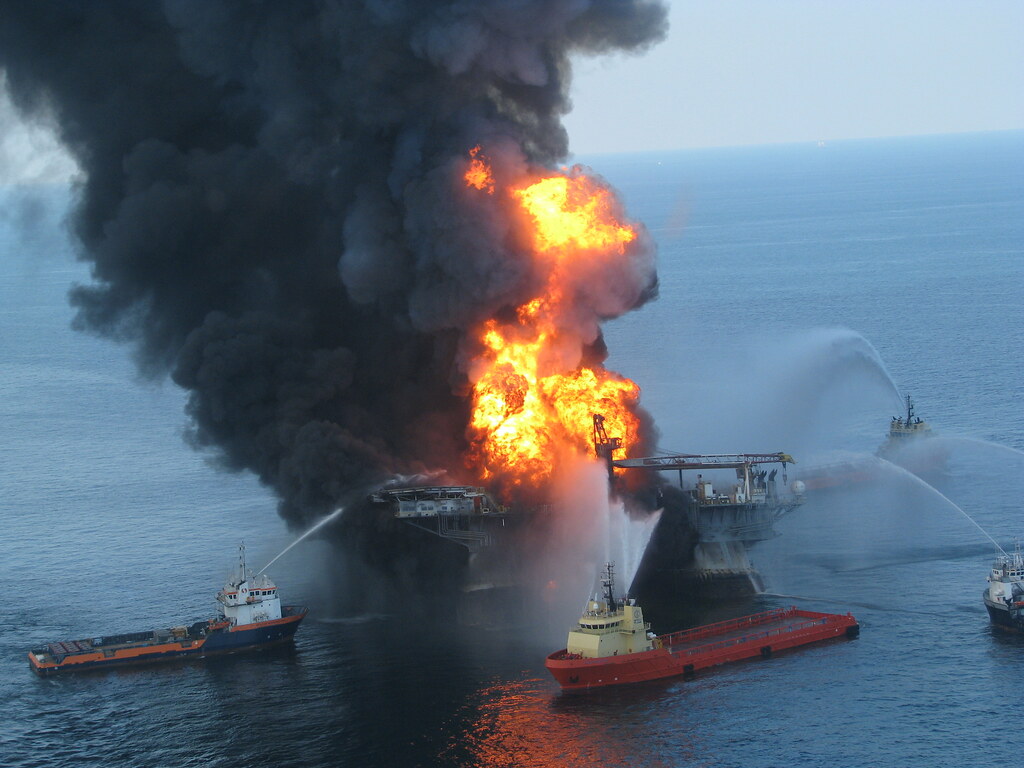 How does it impact our environment in comparison to other sources of oil and gas?

Offshore drilling has various unique and pernicious environmental impacts which differ from other sources of oil and gas. For example, conducting seismic surveys with ‘air gun blasting’ involves emitting high-decibel explosive impulses. But, the noise it creates can kill or damage marine life. The high decibels it produces reduce zooplankton, impair fish eggs and larvae, and temporarily or permanently deafen adult and juvenile fish and marine mammals. As a result, it can radically alter the important migratory patterns of wildlife, leaving suitable habitats devoid of life.

Moreover, drilling into the ocean floor releases thousands of gallons of polluted water. The ‘drilling muds’ it produces contain toxic substances, including benzene, zinc, arsenic, radioactive materials and other contaminants. These harmful products lubricate drill bits and maintain pressure. However, they can be dangerous for marine life. Within a certain threshold of toxicity, it is perfectly legal to release these muds back into the marine environment. 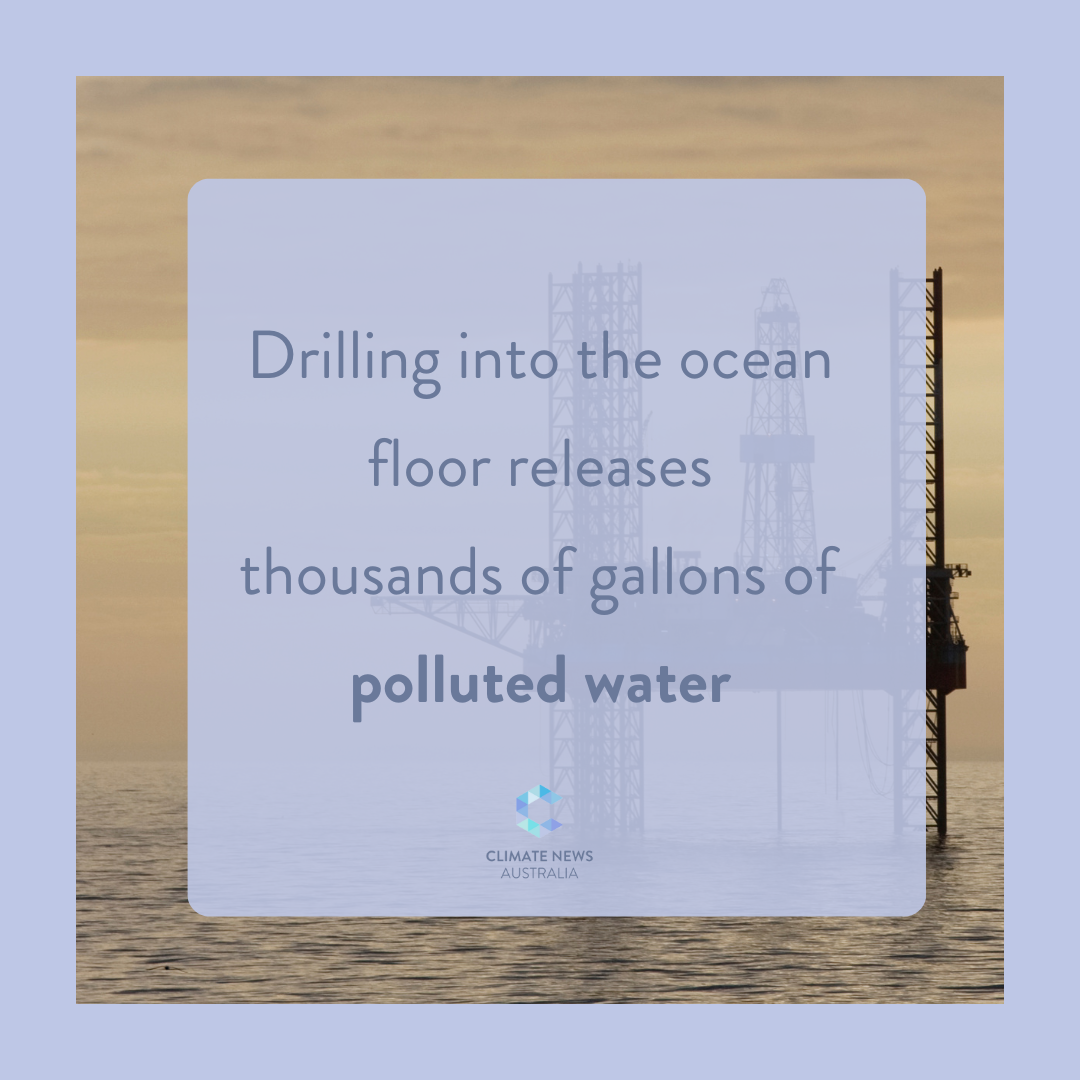 Why is offshore drilling bad?

Offshore drilling is particularly bad due to the risk of oil spills. Each year, about 880,000 gallons of oil end up in the ocean during the ordinary operations of North American offshore oil rigs. But, natural disasters and human errors cause much larger oil spills.

The Montara oil spill which occurred 220 kilometres off the coast of Western Australia was one of Australia’s worst environmental disasters. A well head accident on 21 August 2009 led to the uncontrollable leak of oil and gas. It took 74 days to stop the discharge of oil and gas. The oil in the Timor Sea affected sea birds and marine fauna, such as sea snakes and green turtles. The outcome was a 90,000 square kilometre oil slick that reached the Indonesian coastline.

Australia is comparatively low on the global list with an estimated 11 rigs. Nevertheless, industry estimates show that about 890 offshore wells were drilled in Australia before 2015. 782 of these are still active. These rigs continue to pose a serious threat to Australian marine life.

Should we continue offshore drilling operations?

The continued production of any fossil fuels is bad from a climate change standpoint. We need a drastic and immediate global transition away from coal, oil and natural gas. A mere 25 fossil fuel producers have been responsible for over 50 per cent of the world’s industrial emissions since 1988. Now that clean, renewable energy produces cheaper electricity than fossil fuels in most cases, there is no excuse for continuing to drill for these dirty fuel sources. 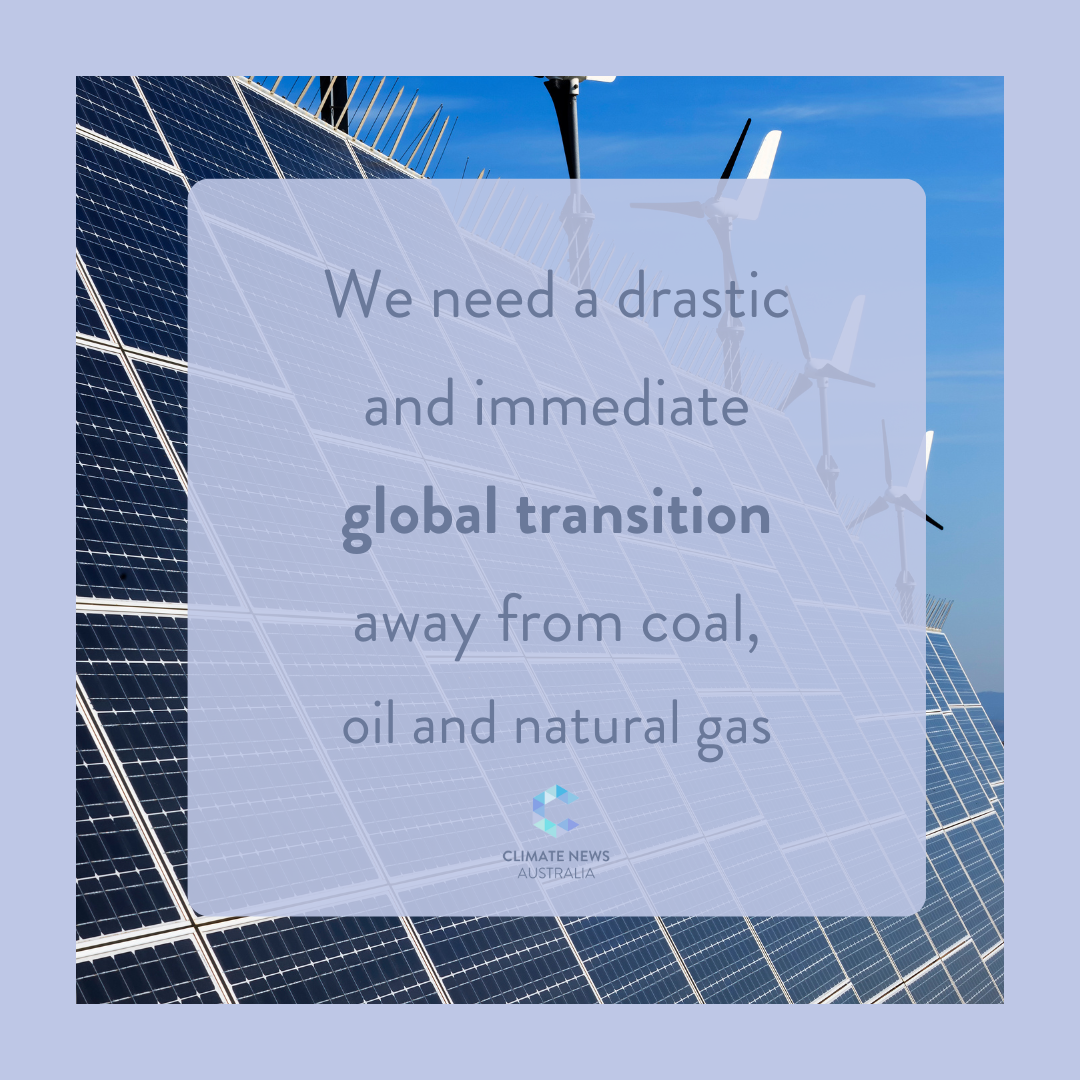