It is not widely known that Australian ingenuity made clean solar energy companies viable. Though the solar cell was invented in the US in the 1940s, there was little progress until Martin Green came along. He was an engineering professor at the University of New South Wales who started tinkering with the solar cell.

In 1975, the Brisbane-born engineer started a PV solar research group. They began beating the Americans at their own game. “Pretty soon, we started beating all these groups in the US in terms of the voltage [out of a solar cell] we could get”, Martin Green said in an interview. “NASA had a project that had six contractors working on it. We beat them all.”

Successive governments have heavily promoted the nation’s fossil fuel industry. However, not only did Australians pioneer the development of solar power, but they are also world leaders in adopting it. As the New York Times noted in 2020, homeowner roof installations have made the country a powerhouse in renewable energy. Moreover, a staggering number of solar farms are currently operating or planned across Australia.

Why are Australians installing solar panels on rooftops?

Since May 2021, more than one in four Australian homes run a solar energy system at home. In some provinces, over four in ten households have solar panels on their roof. The solar industry is expected to generate 25 times more electricity than the grid’s remaining coal generators by 2025.

Australia is now leading the world in the uptake of solar power. The country installed about 5.2 gigawatts of solar energy in 2021. While that number is still relatively small, it is a big Australian success story. 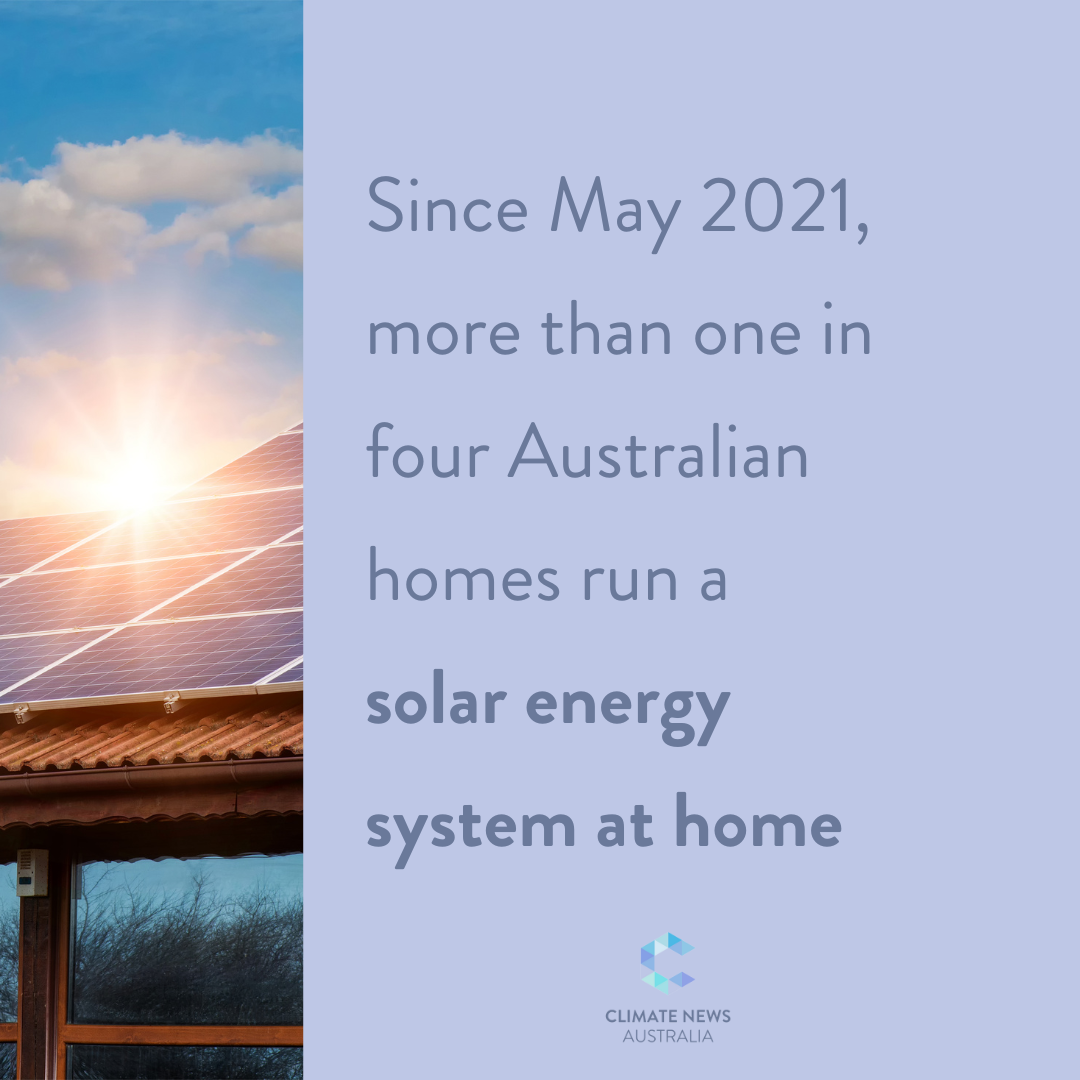 Solar power can save a homeowner significant amounts of money over the years. Gas prices are soaring, pushing up household bills. Yet, a standard 6.6kW solar system costs around AUD $6,500 and can last up to 20 years. It can pay for itself several times over. Australia’s warm climate makes this more feasible than in most countries.

Moreover, solar power allows homeowners to be independent of the electricity grid and have their own supply in case of an outage. Climate change increases the likelihood of large natural disasters, thus destabilising the national power supply. Home installations have also decreased stress on the Australian electricity grid. The stress on the grid actually decreased in Australia in the summer of 2020/21, even as demand – primarily for air conditioners – went up.

Better for our air

Solar power is also better for the environment. Clean solar energy does not produce carbon emissions or pollution. It also means that Australia burns less coal, oil and gas at power plants.

To avert climate change, Australia needs to play its part in achieving net-zero carbon emissions in the same way as other countries. Installing solar panels also allows households to use more clean electricity than they have generated. As more people adopt electric vehicles and electric heating pumps in the coming years, they will likely consume more electricity. 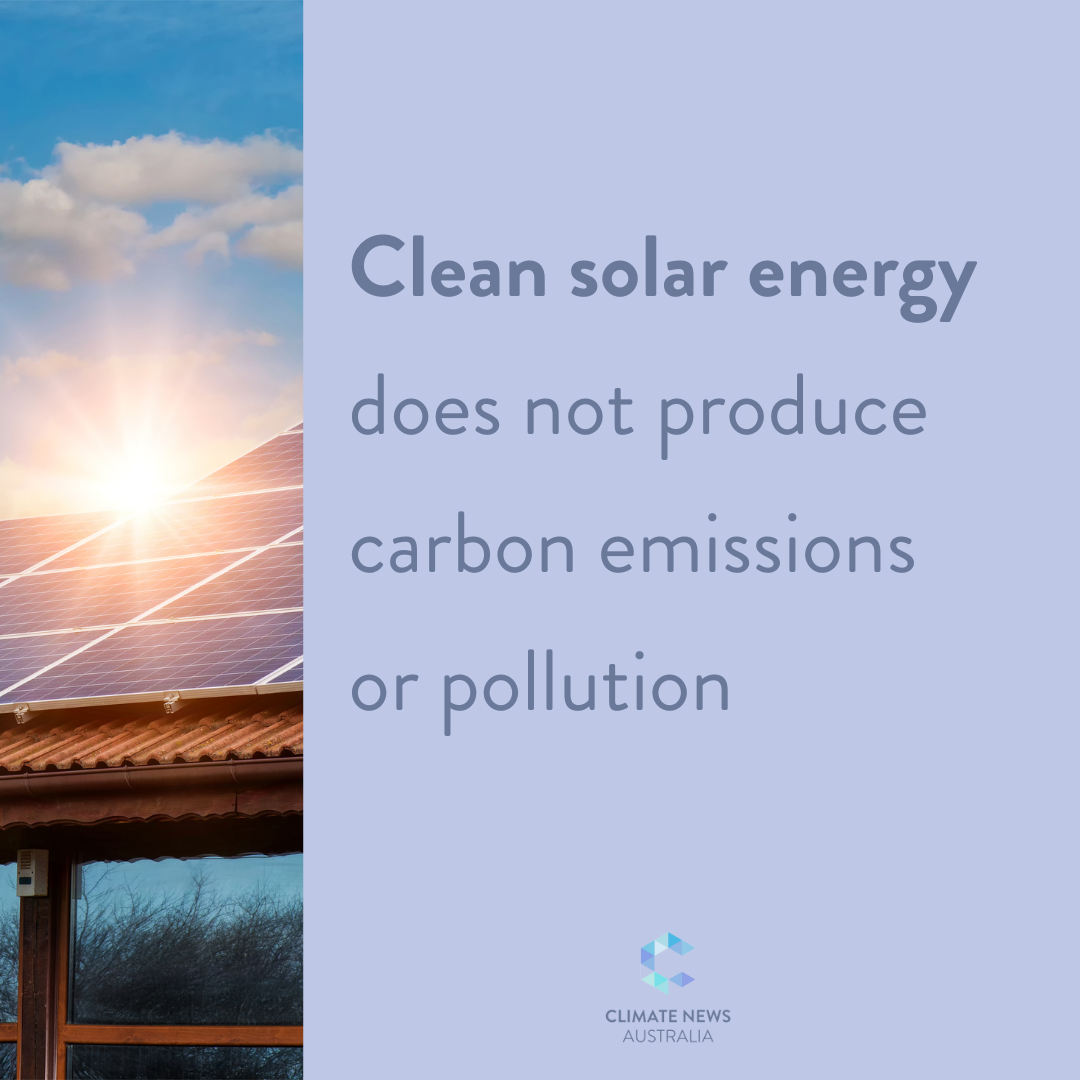 How many solar energy companies are there in Australia?

Thousands of solar system installers operate across Australia. Many are local – operating only in their state or territory – while some operate across the nation. It can be intimidating to find the right company to install solar panels on your roof with so many available options. Several sites offer lists of the top or most highly-rated solar energy companies. But, there is an easier way to approach this: accreditation.

The Australian Clean Energy Council (CEC) is the accreditation body for the designer, installer and components part of the industry. Without using accredited suppliers and installers, you will not be eligible for federal or state rebates for solar installations. The CEC lists more than 8,000 accredited solar installers, and the categories of accreditation range from design-only to install-only to design and install. Off-grid systems need separate CEC accreditation. The industry directly funds the CEC to ensure at least a basic level of competency and professionalism.

Accreditation by the Australian Clean Energy Council is a must-have for a company selling and installing solar panels and battery storage. Here are some of the big players in the market.

SunPower is a leading manufacturer and has been operating for 35 years. Their solar portfolio offers a wide range of solutions for optimal performance and long-term reliability.

Trina Solar is a well-known budget solar panel manufacturer from China with a long history in Australia. The company broke the world record for solar cell efficiency seven times in one year. 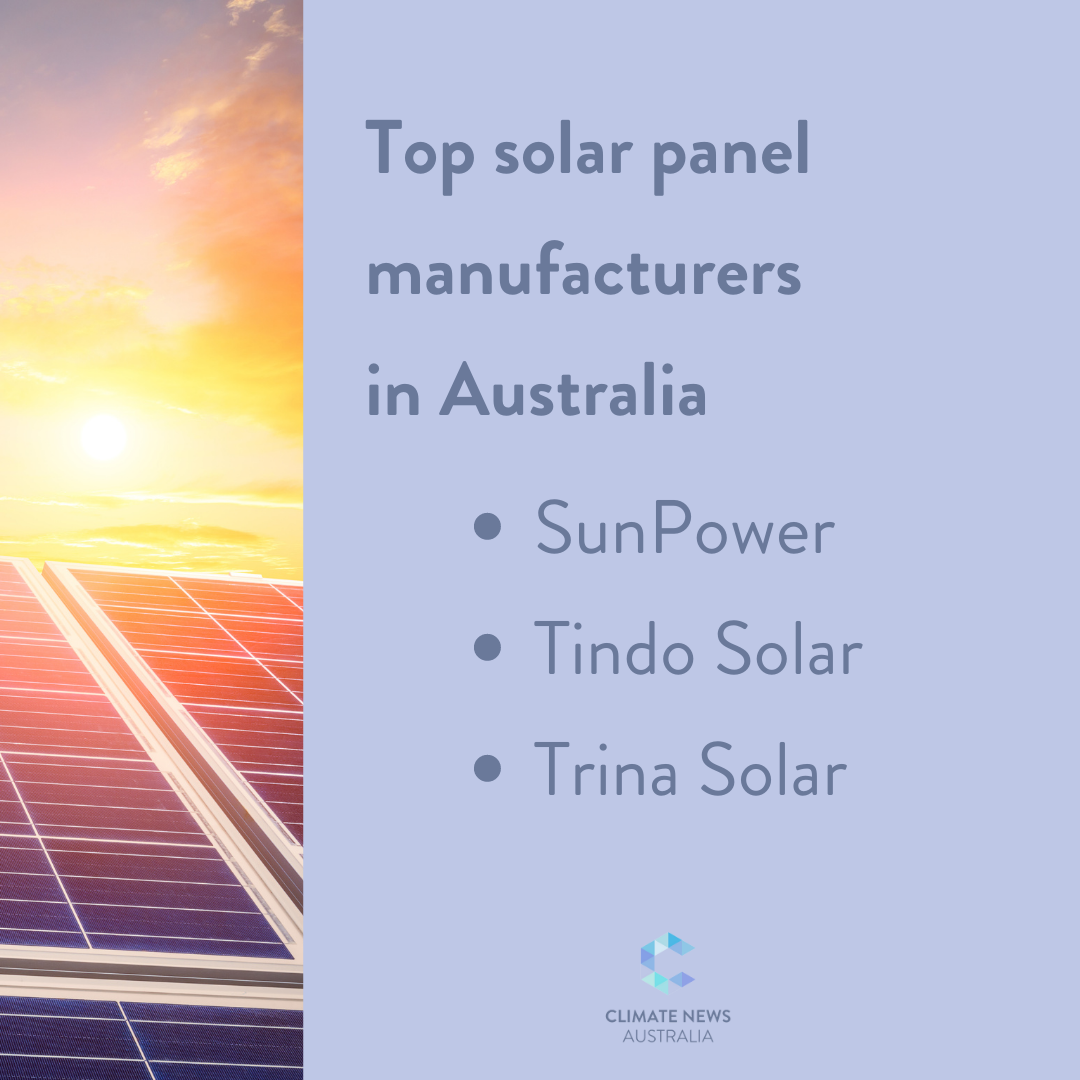 There are hundreds of solar energy installers throughout Australia. You can search for a provider in your area here, and below are some of the top solar installers that are also Clean Energy Council-approved: 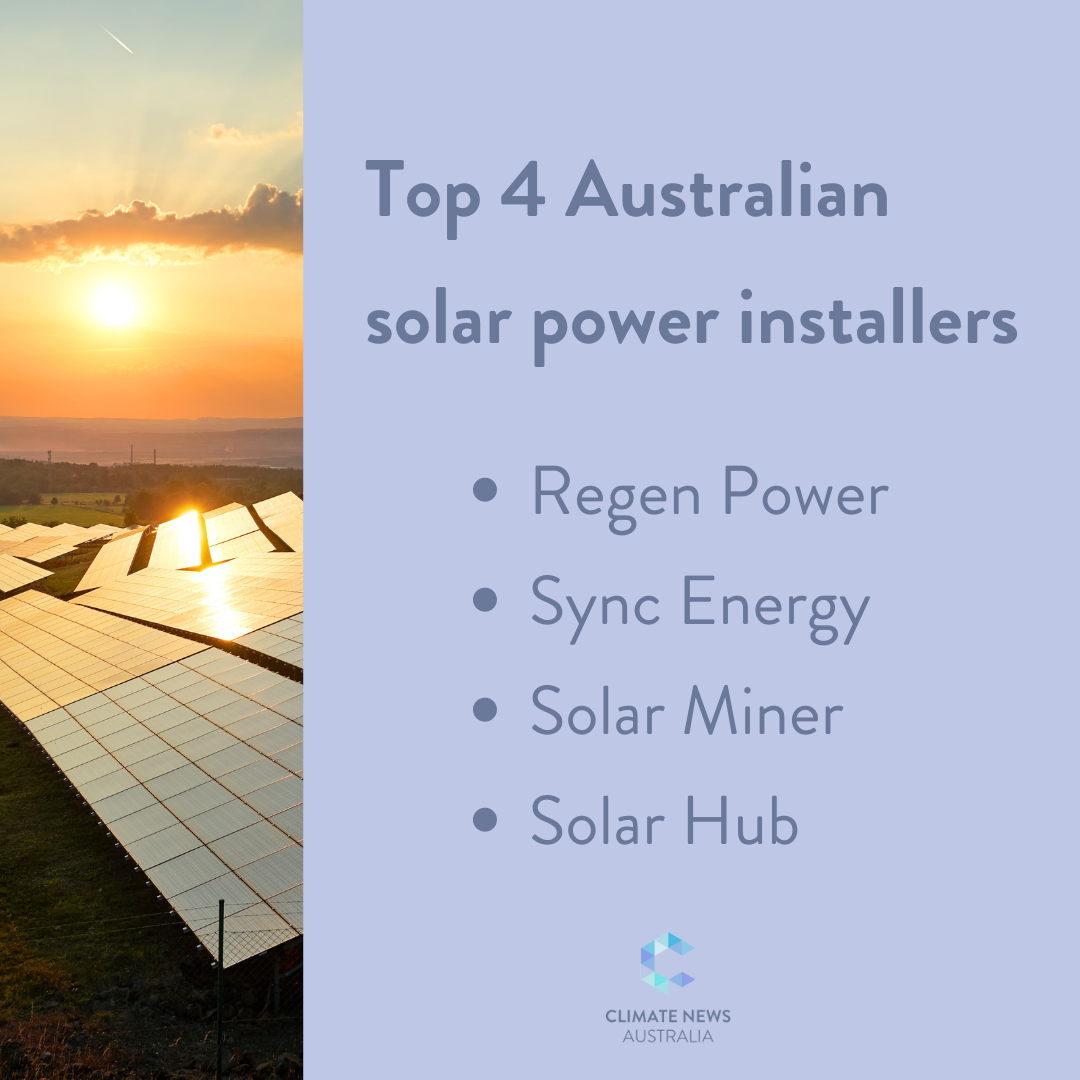 More tips and ideas on finding a good solar installer can be found here.

In 2021, 32.5 per cent of Australia’s total electricity generation came from renewable sources for the first time. New government policy is for this to reach 82 per cent by 2030. That is a huge shift in its energy mix.

Tasmania produced more renewable energy than it consumed in 2019. Its government is now looking to become a major clean energy exporter. Many other states plan to generate all their electricity from renewable sources by 2030. In fact, the country could eliminate 80 per cent of its greenhouse gas emissions by doubling the pace of solar and wind power installations. 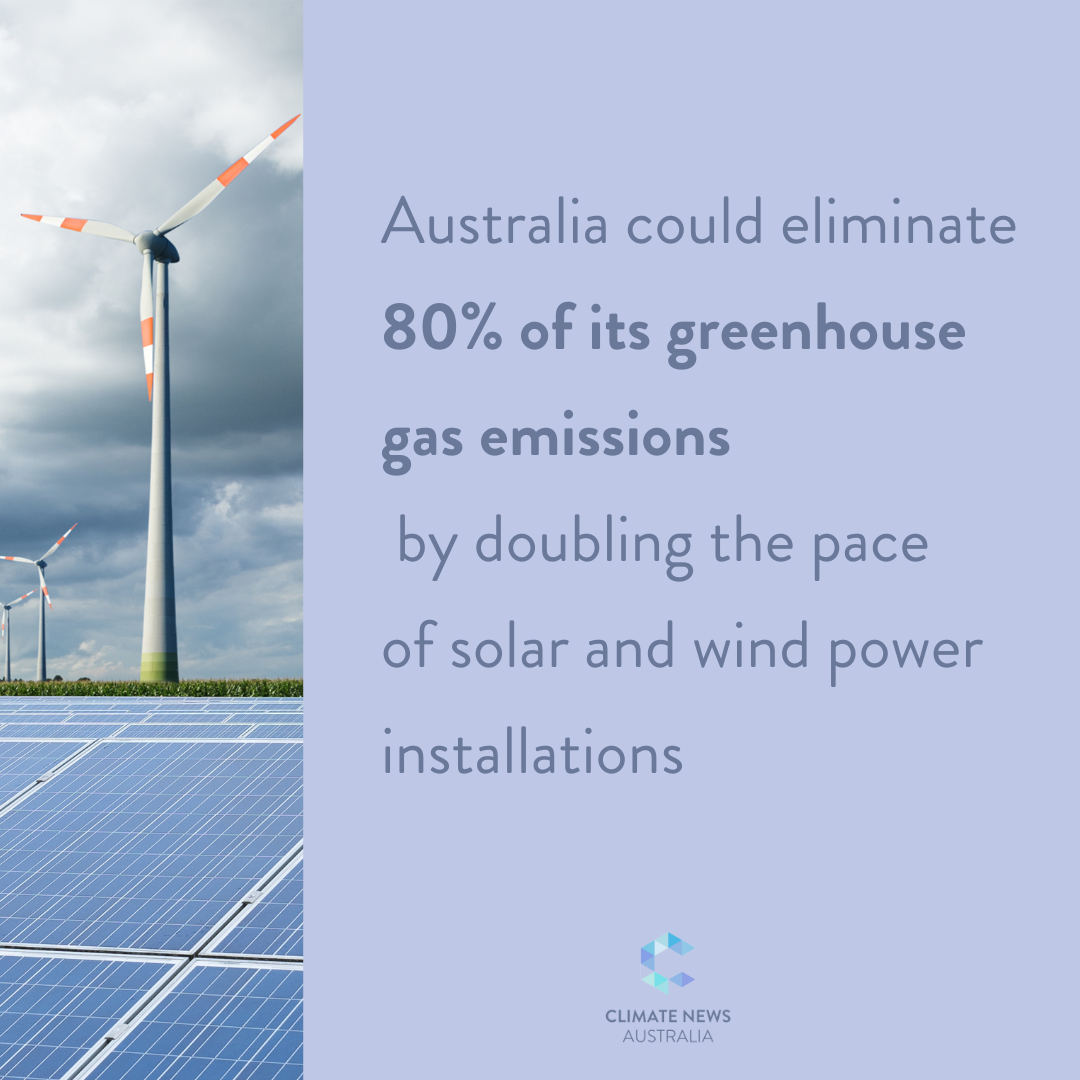 Why solar power in Australia matters

Over the last few decades, even as the Australian government has eventually accepted the reality and impact of climate change, its focus has been on promoting fossil fuel industries. Coal still powers a large majority of the Australian electricity grid, even as countries, such as the United Kingdom, have moved away from coal due to its environmental impact.

In this context, the fact that ordinary Australians have embraced solar power with gusto is a testament to their forward thinking. In 2021, coal-fired power consumption and gas generation in Australia reached a record low supply due to the solar industry. As solar prices have continued to fall, the cost of running coal-fired stations has become more expensive to run.

Australian engineers continue to lead the world in solar development. In 2020, a team of researchers announced world-beating results in developing cheaper and more efficient solar panels. This would not only mean cheaper electricity and cleaner air, but it would also make the country a world leader in tackling the climate crisis.