Big Oil is spending hundreds of millions to green its image while dedicating just a fraction of its investments to clean energy, a new report reveals. In contrast to their stream of proactive climate messaging, these super-polluters are doubling down on fossil fuel investments that will lock in climate-wrecking emissions for decades to come.

Their report, Big Oil’s Real Agenda on Climate Change 2022, found that 60 per cent of the public messages from 2021 contained ‘green’ claims. Yet, just 12 per cent of capital expenditure is forecast for ‘low-carbon’ activities in 2022. Moreover, some of these ‘low carbon’ activities are likely to include fossil fuel funding, as both TotalEnergies and Shell hold fossil gas investments in their ‘low carbon’ outlook. These companies are overseeing a “systematic misalignment” between their public messaging and business operations, the report found.

Ultimately, the report reveals those holding the most power to avoid the worst of climate breakdown are creating the illusion of positive action while continuing business-as-usual. “The world’s big oil and gas companies are spending huge amounts of time and money talking up their ‘green’ credentials, while their business investments and lobbying activities tell a very different story”, said Faye Holder, Programme Manager at InfluenceMap. “While this PR strategy might convince some people, it doesn’t change the fact that these companies are out-of-step with science-based pathways to net zero.”

The age of greenwashing

The evidence shows these supermajors have established a systematic campaign promoting themselves as proactive on climate. This is while lobbying efforts and business operations were “overwhelmingly in conflict” with achieving the Paris Agreement. These expensive campaigns are nothing new, and they are big oil’s perpetuation of its “deny and delay” strategy made infamous by the tobacco industry. But, while promoting misinformation and disinformation means that companies risk facing legal action over greenwashing disputes, to date, this has not stamped out such activities — as InfluenceMap’s new study reveals.

“Misleading fossil fuel messaging strategies are hampering global efforts to address the climate emergency, and increasingly they are also posing a legal risk. To confront the climate crisis, we have to stamp out greenwashing using every tool we have – through the courts, through policymakers and through regulators”, said Johnny White, a lawyer at the environmental non-profit ClientEarth. “InfluenceMap’s analysis adds to the wealth of evidence showing the glaring gap between the oil supermajors’ environmental claims and the reality of their climate-wrecking business plans.” 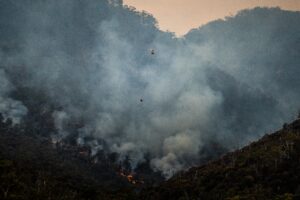 Climate change is a financial risk

Fossil fuel investments create significant climate-related financial risk via the effects of climate change. This means the gulf between Big Oil’s words and actions is incredibly problematic for its investors. For example, in March 2022, ClientEarth announced legal action against Shell’s board of directors, arguing that their failure to properly manage climate risk breaches their legal duties.

“Investors can already see there is a disconnect between companies’ climate pledges and their actions, most notably their capital expenditure towards decarbonisation”, said Laura Hillis from the Investor Group on Climate Change (IGCC), Australia. “Investors want to see companies genuinely commit to and plan for the transition to net zero emissions — not more greenwash. It’s past time for companies’ actions to match their statements.”

Climate action coalition CommsDeclare is calling for an end to fossil fuel advertisements across Australia, following the ban in Sydney announced in August. “Fossil fuel companies can’t be trusted when it comes to greenwashing, which is why we are calling for a ban on fossil fuel ads”, said CommsDeclate founder Belinda Noble. Shell has run Australia’s most expensive advertisement on Facebook ever, she points out, but the company was the worst offender for overselling its green credentials versus actual low-carbon investments. Shell also has a long history of backing anti-climate lobby groups and greenwashing.

“InfluenceMap’s report shines a light on the staggering amount of disinformation that is being spread by some of the world’s biggest polluters. This report shows the lengths oil and gas companies are willing to go to mislead citizens and protect their own interests”, said Gwendoline Delbos-Corfield, an MP at the European Parliament. “We urgently need change — more transparency, flagging and fact-checking, and real consequences for repeat offenders.”

The world is heading into an “unchartered territory of destruction” due to governments and businesses delaying climate action, says the latest report on the state of the climate. Big oil is not only the world’s leading climate culprit, but it also has its “fingerprints” on derailing urgent climate efforts too.