COP27: Australia’s Climate Plans are a Path to Catastrophe

Home » COP27: Australia’s Climate Plans are a Path to Catastrophe

With the COP27 climate summit just around the corner, the United Nations (UN) has released its synthesis report reviewing countries’ latest climate plans. While these commitments have improved since last year, they remain far short of what is required to limit warming to 1.5°C above pre-industrial times.

The UN’s report found that current plans, known as Nationally Determined Contributions (NDCs), would result in a 10.6 per cent increase in greenhouse gas emissions by 2030 compared to 2010. The latest science from the UN’s Intergovernmental Panel on Climate Change (IPCC) indicates a 43 per cent emissions reduction is required to keep 1.5°C alive. Exceeding this level of warming increases the risks of unavoidable and multiple climate hazards, some of which will be irreversible, warns the IPCC. Already, the air pollution, disease and heat waves associated with climate change are causing millions of early deaths every year.

Ahead of COP27, Simon Stiell, Executive Secretary of UN Climate Change, has called on governments to urgently revisit and strengthen their NDCs. “We are still nowhere near the scale and pace of emission reductions required to put us on track toward a 1.5 degrees Celsius world”, said Mr Stiell. Leaders must pivot from negotiations to implementation and “get moving on the massive transformation that must take place throughout all sectors of society to address the climate emergency,” he added.

The UN’s Environment Programme (UNEP) has also published its Emissions Gap Report 2022. The report’s findings are equally stark. There is currently “no credible pathway to 1.5°C in place”, it states. Only an urgent system-wide transformation can deliver the enormous cuts required to limit emissions by 2030.

“This report tells us in cold scientific terms what nature has been telling us, all year, through deadly floods, storms and raging fires: we have to stop filling our atmosphere with greenhouse gases, and stop doing it fast”, said Inger Andersen, Executive Director of UNEP. “We had our chance to make incremental changes, but that time is over. Only a root-and-branch transformation of our economies and societies can save us from accelerating climate disaster”, she said.

While the window is rapidly closing, the world must strive to remain as close as possible to 1.5°C, said Ms Andersen. This is because, in addition to minimising climate damage, rapidly advancing a net zero future would deliver many socio-economic benefits. These include cleaner air, green jobs and universal energy access, she said.

Is Australia prepared for COP27?

Much has changed in Australia since COP26 in Glasgow. A new government and strengthened emissions reduction target means it has made one of the most significant advancements in its climate ambition over the past 12 months. This includes joining the Global Methane Pledge — one of the last developed nations to do so.

However, this progress is primarily due to the fact Australia’s climate policies were exceptionally weak before. Prime Minister Albanese’s new climate commitments have only advanced its plans from “highly insufficient” to “insufficient” to meet the Paris Agreement, and are consistent with 2°C of warming. For Australia, this level of warming would “significantly” increase the likelihood of “heatwaves, power blackouts, bushfires, floods, water restrictions and reduced crop yields”. It could also result in the loss of 99 per cent of its coral reefs. The government must commit to policies that avoid this future at all costs. Failure is “an act of monstrous self-harm”, warned COP President Alok Sharma. 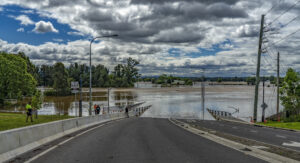 To align with the 1.5°C pathway, climate groups are urging Australia to commit to a 75 per cent emissions reduction by 2030, or 2035 at the latest. Fundamentally, the government must then revise and implement stronger domestic policies to meet this. There are additional and equally vital measures Australia should commit to meet the scale and urgency of action required.

The Albanese government’s support for new fossil fuel projects is a glaring “discrepancy” with its new NDC target of a 43 per cent reduction by 2030 from 2005 levels, highlights Climate Action Tracker (CAT). “New gas and coal projects will significantly add to Australia’s mitigation burden and compromise its ability to meet the new NDC”, states the organisation. Moreover, most of Australia’s new fossil fuel production is for exporting abroad, and the country does not include these in its emissions accounting. Australia’s exported emissions are substantial — twice that of its domestic emissions.

The government’s justification for new fossil fuel developments does not stack up against the science. In 2021, the International Energy Agency (IEA) made clear that no new fossil fuel projects are compatible with net zero. This message was reinforced and strengthened by a 2022 study by the International Institute for Sustainable Development (IISD). In addition, Pacific leaders are calling for stronger climate action from Australia, including no new coal and gas developments. The UN Secretary-General António Guterres has also said investing in new fossil fuel developments is “moral and economic madness“. 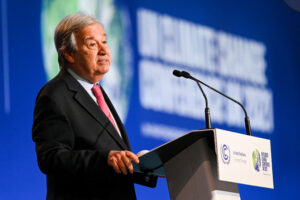 Australia’s progress on climate finance is where it is failing most. Its efforts are “critically insufficient“, according to CAT. A 2022 report led by Oxfam Australia and ActionAid Australia found it is contributing just one-tenth of its international fair share of climate finance, which should be AUD $4 billion annually. This funding is essential to help low-income nations develop sustainably, reduce emissions and adapt to climate change.

Addressing the climate crisis with mitigation and adaptation measures costs far less than dealing with its devastating impacts. For example, investing in locally-led climate adaptation can generate benefits ten times the initial costs, according to the Global Commission on Adaptation (GCA). These benefits include sustainable and inclusive development, poverty reduction, environmental protection, and food and water security.

At COP27, Australia must commit to contributing its fair share of climate finance, including to the Adaptation Fund and Green Climate Fund. The latter involves providing the AUD $4 billion per year required up to 2025. It must also constructively join negotiations for the post-2025 climate finance goal, recognising that mitigation and adaptation costs are rising rapidly, and contributions must reflect this.

Commit to loss and damage reparations

Australia has an emissions-intensive economy. Per capita, its cumulative emissions are also the third highest globally, even higher than the US. For such reasons, Oxfam Australia and ActionAid’s report also calls on Australia to participate more significantly in loss and damage negotiations at COP27. Loss and damage refers to the consequences of climate change that exceed what people can adapt to, such as damage from extreme weather events. As the impacts of climate change worsen, developing countries could suffer economic losses of between USD $1-$1.8 trillion annually by 2050. These nations have contributed the least to the climate crisis and also lack the resources to recover.

Therefore, a proposal from Pacific Islands nations and 124 other low-income countries calls for governments to adopt standalone loss and damage finance at COP27. Stakeholders have suggested funding this by redirecting fossil fuel subsidies or imposing a windfall tax on oil-and-gas companies’ excess profits — the “polluter must pay” principle.

In 2021/22, Australia handed out AUD $11.6 billion in fossil fuel subsidies to companies that paid little to no tax on billions in profits. Globally, governments subsidise polluting fossil fuel companies with hundreds of billions of dollars every year. When including foregone taxes and underpayments for environmental costs, the subsidies are even higher – USD $5.9 trillion or 6.8 per cent of GDP in 2020, according to the International Monetary Fund (IMF). These subsidies also distort energy markets and inhibit the urgently needed transition to renewable energy.

Australia must step up as a climate action leader at COP27

Australia is a wealthy country with abundant renewable resources. It has both the means and responsibility to strengthen its climate commitments which remain subpar. Currently, Australia plans to bid to host COP in 2026 in partnership with Pacific Island nations. But, unless the government shows better leadership on climate issues, this will be a “contradiction”, said former Kiribati president Anote Tong. There are fears countries such as Kiribati may be uninhabitable by 2060 due to inaction on climate change.

At COP27, Australia must ramp up its climate ambition – at the very least to align with the Paris Agreement pathway. Anything less than a domestic 75 per cent emissions reduction, scrapping new fossil fuel developments and contributing its fair share of climate finance and loss and damage fall short of the urgent action required.