Home » Would Stopping Natural Gas Mining Halt Climate Change? (Video)
This video addresses whether stopping natural gas mining would have an impact on climate change.
The US and other countries are putting pressure on Australia to set more ambitious climate change targets. However, Prime Minister Scott Morrison is resisting their demands. Instead of setting out a ‘green’ recovery, his government is leading a ‘gas-led’ recovery to the COVID-19 economic downturn. This risks missing the country’s already insufficient climate goals and leaving stranded investments in natural gas.

What is natural gas mining?

Natural gas mining is the extraction of natural gas from underground reserves. Like other fossil fuels, natural gas formed over millions of years. It consists of decomposed plants, animals and other organisms. Their exposure to extreme heat and pressure beneath the Earth’s surface can create natural gas. Different mining techniques are employed to extract it. They depend on the rock formation that the gas is trapped within and the proximity to the surface.

Conventional gas is easily accessible. It is trapped beneath permeable rock formations. In many cases, it is also found with oil. Sometimes the natural gas forms a floating layer on top of the oil. Therefore, this type of natural gas can be mined along with oil.

Conventional reserves of natural gas are usually closer to the surface, making them easier to reach. Mining them involves drilling a well directly down through the earth. When a well intercepts the reserve, the gas rises to the surface without the use of a pump.

Mining for unconventional natural gas is more difficult. These deposits are 4,500 metres or more beneath the ground. It is difficult and expensive to reach the natural gas and bring it to the surface. Complicating matters further, unconventional gas may be found within various different rock formations.

For instance, many unconventional natural gas reserves are trapped within shale. This fine-grained, clastic sedimentary rock is composed of mud. It is extremely tough, making drilling into it a costly procedure.

Alternatively, natural gas often forms in coal seams. In these cases, the gas bonds to the surface of coal particles. In the past, natural gas was a waste product of coal mining. But, in recent decades, methane’s value as a fuel source has been exploited.

Gas is also found in impermeable rock formations. This is known as ‘tight gas’. The movement of both tight gas and coal seam gas is extremely limited. Therefore, these deposits often require fracking and a higher density of wells to extract.

Why is natural gas mining bad for global climate change?

The fossil fuel industry likes to promote natural gas as the ‘cleanest fossil fuel’. It is certainly true that burning gas releases less carbon dioxide (CO2), in relation to the energy it produces, than coal or oil. This is important since CO2 is the main driver of climate change. But, it is not the only cause.

In fact, per unit of mass, methane can trap more heat in the atmosphere than CO2. One tonne of methane has the same impact over a 20-year timeframe as between 84 and 87 tonnes of CO2. Likewise, over a 100-year timeframe, it has between 28 and 36 times the global warming potential of CO2. From a climate change perspective, the only advantage of methane emissions is the fact it stays in the atmosphere for a shorter time than CO2. 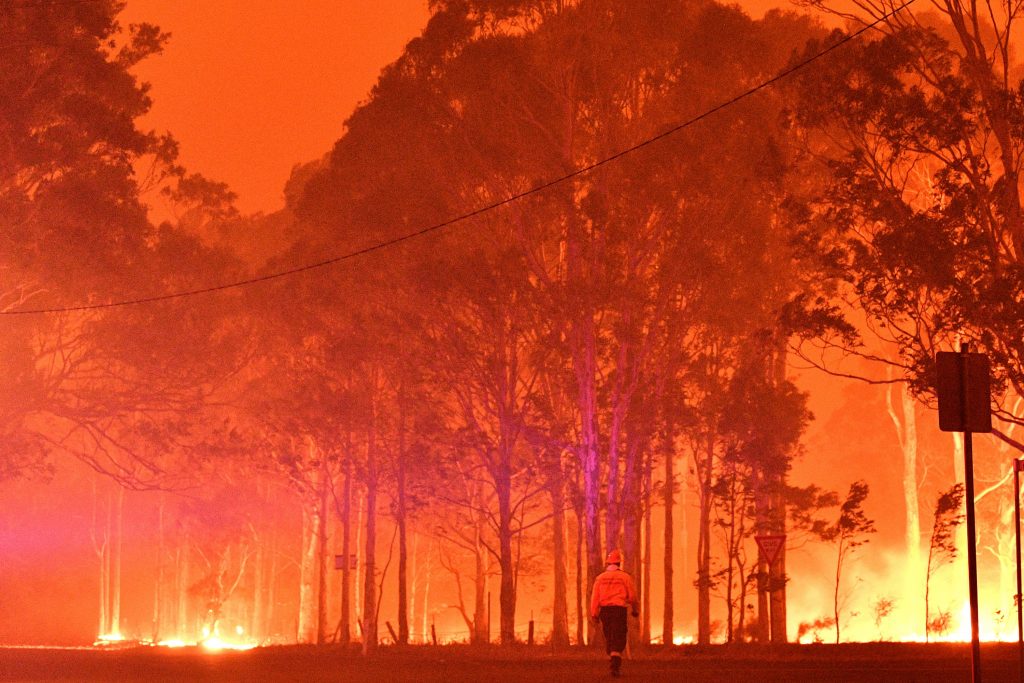 Methane leaks during coal, oil, and gas extraction. But the fossil fuel sector has not accurately recorded these emissions. Since 2012, peer-reviewed studies show that natural gas emissions have been underestimated by at least 25 to 40 per cent. Some studies suggest that the underestimation could be as high as 60 per cent.

For years, the Australian government has ignored the scientific consensus showing that the global warming potential of methane is worse than that of CO2. Subsequently, the natural gas industry has been underestimating its emissions. This means that estimates of national emissions may be as much as 10 per cent below actual levels. If Australia’s methane levels were properly measured using the latest science, annual emissions would increase by over 50 million tonnes per year.

Furthermore, although natural gas produces less CO2 than coal, if enough methane leaks during its production, it is no ‘cleaner’ than coal. Some scientists estimate that if more than two to three per cent of the methane from natural gas mining leaks into the atmosphere, it is even worse for global warming than coal. In the US, oil and gas systems leak on average 2.3 per cent of all gas that they produce. This is 60 per cent higher than the leakage rate reported by the government.

What are some Australian examples of climate warming disasters?

Global warming has already increased the world’s average temperature by about 1°C. Australia, in particular, is feeling the heat. Eight of the country’s ten warmest years on record have occurred since 2005, according to the Commonwealth Scientific and Industrial Research Organisation. As a result, Oceania has suffered multiple global warming disasters in recent years.

For example, in 2019, Australia experienced some of the worst bushfires in its history. They razed more than 18 million hectares of bush in Australia. Sadly, 33 people died, including nine firefighters.

Nearly three billion animals, excluding insects, were also killed or displaced as a result. The World Wide Fund for Nature (WWF) described it as “one of the worst wildlife disasters in modern history”. Scientists studying the event believe that human-induced climate change raised the chance of the bushfires happening by at least 30 per cent.

Bleaching of the Great Barrier Reef

The Great Barrier Reef is one of the seven wonders of the natural world. It is the world’s largest coral reef system and is the only living thing visible from space. But, it is also dying thanks to the greenhouse gases emitted by the fossil fuels that we consume.

Global warming heats up the ocean. In response, stressed corals expel algae living inside of them. This algae is their main energy source. It also gives corals their vivid colours. Therefore, removing them leaves the reef bleached white. This does not kill the coral immediately. However, the bleached coral will die unless the ocean’s temperature reduces.

In early 2020, the Great Barrier Reef experienced one of its worst bleaching events in history. It was the third time in five years that a mass coral bleaching event damaged this delicate ecosystem. This has enormous consequences for all marine wildlife.

Between 25 and 33 per cent of all marine species rely on coral reefs at some point during their life cycle. The Great Barrier Reef provides a home to over 1,500 fish species, 411 hard coral species and many other organisms besides. In addition, it contributes more than AUD $5.6 billion annually to Australia’s economy and supports tens of thousands of jobs.

Which global climate goals is Australia on target with?

Currently, Australia has a climate target to achieve a 26 to 28 per cent cut in emissions by 2030 compared with 2005 levels. There are no plans to update this Nationally Determined Contribution (NDC) until 2025. With such a feeble climate goal ambition and a dedication to a ‘gas-led’ recovery, it is no surprise that Australia was recently ranked last out of more than 170 countries for climate change action by the UN.

Morrison claims that the country is on a pathway to net-zero emissions. However, his government will not provide a date for meeting this target. This is despite that Australia is a party to the Paris Climate Agreement. This international treaty aims to cap global warming at 2°C, preferably to 1.5°C above pre-industrial levels, by reducing emissions as soon as possible. The Climate Action Tracker rates Australia’s Paris Agreement target as ‘Insufficient’.

Rising carbon dioxide, methane and other greenhouse gas levels are causing climate change. This is having a direct impact on Australia’s wildlife. The continent has one of the highest species extinction rates. Some animals are simply unable to adapt to such rapid changes to their environment. For instance, heatwaves in 2019 wiped out over 23,000 endangered spectacled flying foxes in just two days. This represents almost one-third of the entire species.

Australia is also the first place on Earth to confirm a mammalian extinction due to climate change. In total, 54 animal species are already extinct in Australia, including 27 types of mammals, 22 birds and four frog species. An additional 10 known species of mammals are critically endangered.

Future extinctions due to climate change

But this doesn’t tell the full story. We have only documented 10 to 20 per cent of the world’s biodiversity. It is likely that many other species have gone extinct without ever being recorded.

Climate change is undoubtedly accelerating this mass extinction. The exceptional wildfires in 2019 have endangered or completely wiped out over 500 species. The natural disaster destroyed more than one-fifth of Australia’s temperate forest. It also wrecked habitats for those animals that managed to survive the bushfires. Many perished, and their sources of food, water and shelter were consumed by the fire.

CO2 accounts for 76 per cent of all greenhouse gas emissions. Methane contributes 16 per cent in CO2-equivalent emissions. Mining and using natural gas for our energy needs is a significant source of emissions. We need to replace it with renewable energies supported by batteries for supplying baseline power.

Australia is well-placed to incorporate these technologies. As of 2020, more than one-quarter of Australia’s electricity generation comes from renewable sources. Solar and wind power is cheaper than fossil fuels for electricity generation. Furthermore, South Australia already has the world’s largest lithium-ion battery at the Hornsdale Power Reserve.

However, stopping natural gas mining alone will not halt climate change. Instead, we need a transition across the world’s energy production to combat climate change. Fossil fuels, including coal and oil, are responsible for 89 per cent of global CO2 emissions. We must stop using all types of fossil fuels immediately if we are to avoid more intense natural disasters, such as bushfires, heatwaves and coral bleaching.