What Is Solar Energy and Its Uses?

Home » What Is Solar Energy and Its Uses?

The heat and light of the sun create solar energy. Solar energy is the most abundant renewable energy source available, and there are different ways to harness it. The most common one is through photovoltaic panels, also known as solar PV. This technology converts sunlight directly into electricity, and it is one of the fastest-growing renewable energy technologies worldwide.

In 2010, the total solar PV capacity installed was 40,334 megawatts globally. However, this has grown significantly throughout the past decade. As a result, more than 700,000 megawatts were installed by 2020. This rapid growth is, in part, the result of the world’s transition towards low-carbon sources of energy.

To slow down climate change, the planet needs CO2e emissions to reach net zero by 2050. Therefore, solar energy has been touted as a major player in the future of global electricity generation.

What are the CO2e emissions from solar power in comparison to fossil fuels?

Currently, China is the world’s biggest market for solar energy. In 2019, this country had 205 gigawatts of installed capacity. Together with the United States, Japan, Germany and India, this group constitutes the top five countries with the largest solar capacity installed. 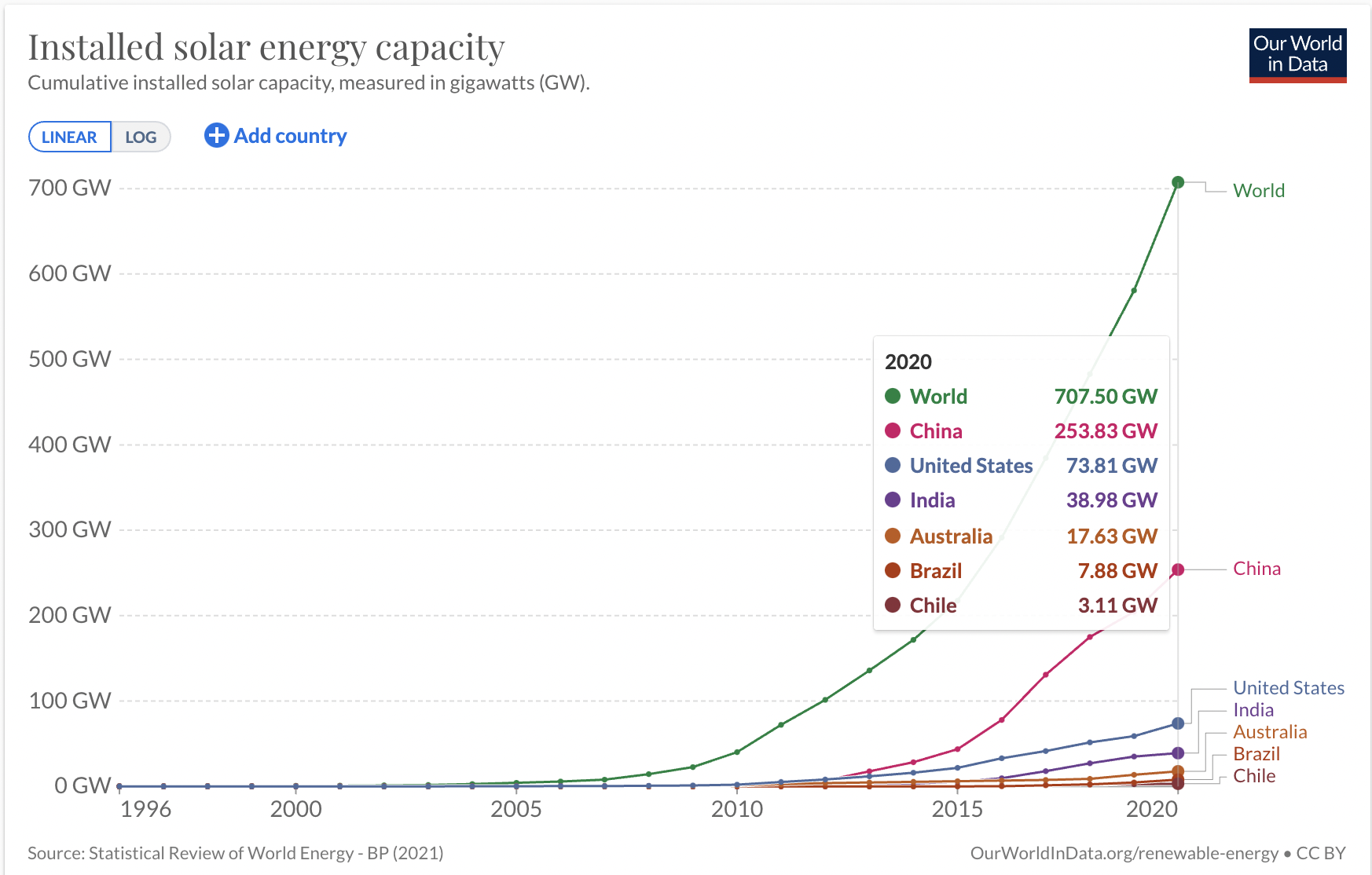 How cost-efficient are solar panels?

While solar panels were once expensive, this has drastically changed in recent years. For instance, the global levelized cost of electricity for large scale solar decreased by 89 per cent between 2009 and 2019. The price went from USD $359 to $40, becoming the cheapest source of energy today. For solar PV, its increased deployment has translated into lower prices. In fact, for the past four decades, each doubling of global cumulative capacity was associated with the same relative decline in prices.

In contrast, fossil fuels do not follow the same learning curves. Their prices depend largely on two factors:

This is different to solar energy plants. Firstly, operating costs are comparatively low for solar power. Secondly, there is no need to pay for any fuel since nothing needs to be dug out of the ground. Therefore, what determines the cost of solar power is the cost of the technology itself.

What is the capacity of solar PV to generate electricity compared to other renewables?

At the end of 2020, global renewable generation capacity amounted to 2,799 gigawatts. Although solar PV is the fastest-growing source, it does not have the greatest capacity. Hydropower accounts for 43 per cent of the total, which represents the largest share of renewable capacity today.

On the other hand, wind and solar power account for equal shares of the total. They both account for 26 per cent of current renewable generation capacity. In 2020, renewable generating capacity increased more than any other year in history. Consequently, solar energy led this expansion with 127 gigawatts of new capacity installed, which represented 22 per cent growth.

How have solar energy technologies advanced in the past decade?

The main achievement of solar energy technologies in the past 10 years is that they are now competitive with fossil fuels. This is particularly true for solar PV technology. The advances that have made this possible include more efficient factories producing the panels, in addition to an increase in research and development efforts.

Moreover, technological advances have increased panel efficiency, and engineering development has improved production. Also, both the mining and processing of raw materials have increased in scale and, therefore, have become cheaper. Plus, more operational experience has been gained. Finally, solar energy modules are more durable and last longer, and capital costs for their production have declined.

What are some of the uses of solar energy in Australia?

Meanwhile, the medium-scale solar energy sector – systems between 100 kilowatts and five megawatts – gained 117 megawatts of new capacity in 2020. This includes schools, shopping centres, hospitals and commercial buildings that are increasing their focus on sustainability while decreasing electricity costs through renewables.

Finally, large scale solar farms are also increasing capacity in Australia, with nearly seven gigawatts already connected to the electricity grid. This is according to data from the Australian Renewable Energy Agency (ARENA). Furthermore, Australia is also investing in these technologies to continue to decrease costs, allowing the development of industries such as clean hydrogen and low emission metals.

The future of solar energy in Australia

Solar energy is a renewable, clean source expanding worldwide, and its uses include small, medium and large-scale generation. Its competitive price means that it is now more beneficial to produce electricity with this source than with any fossil fuel. Besides, projections expect the industry to continue to grow, further decreasing prices through economies of scale. As one of the sunniest countries globally, solar energy represents a great opportunity for Australia to decarbonise its economy.