What Are Biofuels and How Can They Be Used?

Home » What Are Biofuels and How Can They Be Used?

Biofuels are fuels produced from organic materials or biomass. They are often promoted as a lower-carbon alternative to fossil fuels. Most biofuels today are used for transportation, as they can replace fuel in cars, trucks, aviation and shipping. Using biofuel in the automotive industry is nothing new. Many early vehicles in the United States were powered by corn-based ethanol. Rudolph Diesel even used peanut oil to test his first engine.

Biofuels can be made from any biological material, though plant materials and animal waste are most commonly used. In agriculture, biofuels are produced from food crops, such as grains or sugar cane, or specialised high-energy crops. Other sources include forestry, municipal waste and even food industry by-products. There are various ways of making biofuels. Generally, heat, chemical reactions and fermentation are used to break down the starches and sugars in plants. These products are then refined to produce the fuel. Currently, the two main biofuels are bioethanol and biodiesel. These are known as ‘first-generation’ biofuels, which are made from biomass that is typically edible.

With global efforts to reduce emissions and limit warming to 1.5°C, biofuels are growing in popularity. The International Energy Agency outlines that global biofuel production must triple by 2030 to meet global sustainability goals. However, the World Resources Institute questions the efficiencies of biofuels. According to their calculations, by 2050, almost 30 per cent of the world’s crop energy would provide just 10 per cent of the required transportation biofuel. “While photosynthesis may do a great job of converting the sun’s rays into food, it is an inefficient way to turn solar radiation into non-food energy that people can use”, the institute observes. With the world’s food systems already under pressure, are biofuels really part of our sustainable future? 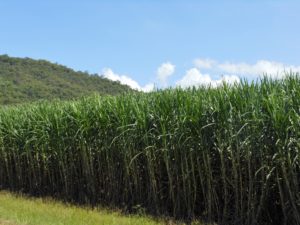 Sugar cane is a ‘first-generation’ biofuel

How are biofuels renewable energy sources?

Biofuels are derived from recently dead or living plant material and animal waste. By their nature, biofuels produced from crops, crop residues and animal wastes are renewable within the year. Biofuels based on forest residues are renewable approximately every 35 years. Other renewable energy sources include solar energy from the sun, wind energy, geothermal energy from heat inside the Earth and hydropower from flowing water.

In comparison, fossil fuels such as coal, petroleum, and natural gas derive from long-dead plant and animal matter. They are hundreds of millions of years old and exhaustible resources, and are, therefore, non-renewable. Biofuels also differ from fossil fuels in that they are non-toxic and biodegradable. Comparatively, they also produce fewer air pollutants, such as particulates, carbon monoxide and sulfur dioxide when burned.

As well as biofuels, the energy stored in biomass, known as ‘bioenergy’, can be used to produce renewable electricity or heat. This is known as ‘biopower’. There are three ways to produce biopower:

While biofuels are promoted as sustainable fuels with a key role to play in our green future, they are in fact hydrocarbons and are chemically identical to petroleum gasoline, diesel or jet fuel. This means that when biofuels are burned, they emit roughly the same amount of carbon dioxide (CO2) as petroleum. But, many scientists view biofuels as carbon neutral. This is based on the assumption that because plants absorb CO2 from the air as they grow, this offsets the emissions from burning the plants as biofuel.

However, in reality, there are many factors that can influence the climate impact of biofuels. It all comes down to how producers make biofuel. For example, one study found that when all the emissions associated with growing feedstock crops and manufacturing biofuel were considered, biofuels can actually increase CO2 emissions rather than reduce them. At the most extreme, biodiesel made from palm oil is even three times more climate-polluting than fossil fuel diesel. This is due to the climate impact of palm oil producers destroying rainforests and draining peatlands to convert the land.

Further environmental impacts of biofuels include habitat and biodiversity loss, unsustainable land use, and fertiliser and pesticide pollution. Moreover, first-generation biofuels compete with the land, water and energy resources that could otherwise produce food. This means farmers must decide whether their crops are used for food or fuel production. Research has found that resources used for biofuels could feed around one-third of the world’s malnourished population. Biofuels may have also affected world food prices. Due to the current increasing food prices and insecurity, there are a number of campaigns calling for a halt to using food for fuel, such as from the NGO Transport and Environment.

Does Australia have a solution for more sustainable biofuels?

Many factors can limit the impact biofuels have in helping us build a more sustainable world. In particular, first-generation biofuels made from food crops and monoculture plantations have many undesirable climate, environmental and human impacts. Unfortunately, these are the most common biofuels in use currently.

In order to make biofuels a more sustainable option, advanced biofuels made from waste and non-food biomass need to be made commercially viable. The Australian Renewable Energy Agency (ARENA) is focused on doing just that. They have provided funding to develop ‘second-generation’ biofuels, which utilise agricultural waste. These have a lower overall emissions impact. This allows farmers to generate additional income from otherwise waste products, which also has the benefit of strengthening regional economies. There are also third-generation biofuels produced from algae, and fourth-generation biofuels, enabled by advancements in plant biology and biotechnology.

Last year, ARENA also published the Bioenergy Roadmap, which reveals that Australia’s bioenergy sector as a whole could contribute AUD $10 billion in extra GDP per annum and create 26,200 new jobs by 2030. It could also reduce Australia’s emissions by about nine per cent and divert six per cent of waste from landfill. By following this roadmap, biofuels for transport would make up seven per cent of all road transport fuels. However, the roadmap also recognises that more advanced technologies for commercial-scale, non-food biofuels are needed.

While later generation biofuels might have a role to play in global sustainability efforts, they are by no means a silver bullet to decarbonise the transport sector and help achieve net-zero emissions. Even the most advanced biofuels still have issues. Instead, biofuels will complement the more effective and less costly solutions, such as hydrogen-powered and electric vehicles, which are pegged to become the primary way to fuel our future transportation of the future.