In 2016, the Northern Territory (NT) government announced a temporary ban on hydraulic fracturing (fracking). At the time, the government explained that it would set up an inquiry into fracking in the NT. Therefore, it asked an independent scientific panel to assess the environmental effects of the gas extraction technique.

In March 2018, the NT fracking inquiry publicly released its final report. The report made 135 recommendations. The scientific panel designed them to bring environmental risks down to acceptable levels. Accordingly, the territory government said that they would adopt these recommendations. Therefore, it removed the fracking ban.

Fracking in the Northern Territory

The NT fracking inquiry established “no-go” zones. Therefore, 51 per cent of the territory is now open to fracking. The Beetaloo Basin is the largest fracking development in the NT. The federal government has identified it as a priority as part of its “gas-led recovery“. Therefore, the government has announced more than AUD $200 million in investment in the basin. This means that the federal government will subsidise 25 per cent of the cost of new fracking wells for private companies. These include Santos, Origin Energy and Imperial Resources.

The Arid Lands Environment Centre lists several NT fracking inquiry recommendations that the government has failed to implement. For example, the gas industry is supposed to pay for scientific baseline assessments. However, these costs currently fall to NT taxpayers. Plus, the government has set 18-month timeframes for these assessments. They were supposed to last three to five years. On top of this, not one environment impact assessment has been conducted for current fracking projects. Again, this does not meet the NT recommendations of the fracking inquiry. 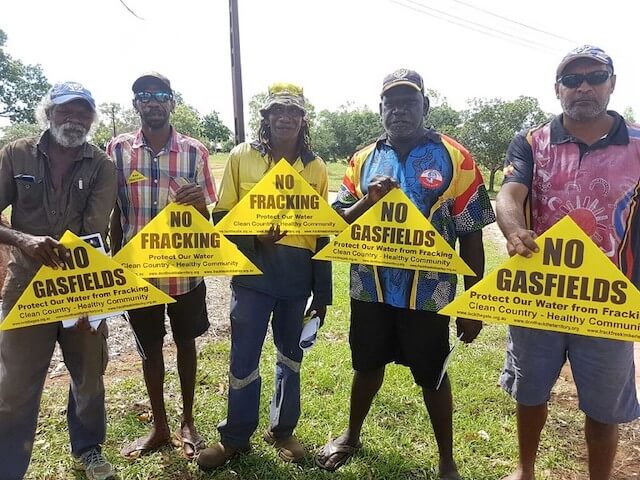 As of June 2020, 86 per cent of people from the NT opposed fracking. The face of this opposition is the Protect Country Alliance. Members of this group include impacted landholders, communities and civil society groups. They are all concerned about gas fracking proposals in the NT. Therefore, the alliance has started anti-fracking campaigns. This has led to a nationwide campaign to stop fracking in the NT. This is no surprise. Just 14 per cent of Australian voters support government subsidies to gas companies.

Parliamentary inquiry into the Beetaloo Basin

In June 2021, the Senate voted in federal parliament for an inquiry into the fracking of the Beetaloo Basin. This came after pressure from First Nations anti-fracking campaigners. In particular, these Traditional Owners sent an open letter to the parliament. Furthermore, 35,000 people from across Australia signed it. Specifically, this letter cited potential risks to land and water.

Fracking can cause environmental contamination, including to groundwater. Therefore, communities cited water-related risks in their submissions to the NT fracking inquiry. Furthermore, fracking in the NT will put threatened animal species at risk. That is because gas wells ruin their habitat. That is the case of the Gouldian Finch, for example.

Finally, fracking in the NT will cause high amounts of greenhouse gas emissions. For example, the Beetaloo Basin could account for seven to 22 per cent of Australia’s total emissions. It is not likely that the NT government could offset that many emissions. Again, this would mean a failure to respect the NT fracking inquiry recommendations.