For years, Australia’s largest energy producer, Woodside Energy, has claimed that its gas will help lower emissions by replacing pollution-intensive coal. It insists that this would support an overall reduction in greenhouse gas (GHG) atmospheric concentrations. State and federal governments have also perpetuated this claim to justify its “gas-fired recovery”.

In 2019, Woodside paid the Commonwealth Scientific and Industrial Research Organisation (CSIRO) more than AUD $140,000 to verify these claims in a report. But, the CSIRO’s report, “Modelling the emission impact of additional LNG in Asia”, did not corroborate the energy giant’s claims. Instead, it found that increasing the Australian gas supply could prolong coal, displace renewables and increase emissions in Asia without a global carbon price.

Woodside Energy did not publish the report. Instead, it ignored it and continued to claim that increasing gas exports would reduce emissions in Asia in its application for its massive AUD $16.5 billion Scarborough liquefied natural gas (LNG) expansion. Despite a supreme court challenge disputing the validity of the environmental assessments, the controversial Scarborough expansion has now been approved.

The CSIRO is the national government agency responsible for scientific research. For the Woodside report, the researchers modelled a range of scenarios of the impact of increasing gas supply to Asia. Its scenarios found either a negative or neutral impact on emissions from the increase in gas supply in Asia. There is an emissions benefit only where a high global carbon price enhances the adoption of renewable electricity generation.

Scenarios where gas would have a “negative impact” refers to cases where gas delays or replaces renewable adoption, extends coal-fired power or increases emissions from gas. “Gas can assist GHG mitigation during the period when carbon prices or equivalent signals are strong enough to force high renewable electricity generation shares. Until the carbon price reaches that level their impact on emissions reduction is either negative or neutral”, concludes the report. “After renewables have reached a high share, additional gas supply has nothing further to contribute to emissions reduction.”

After burying the report, Woodside Energy finally released it, following a month-long freedom of information application.

But in reality, gas competes with renewables, not just coal and oil. New gas infrastructure locks in decades of emissions, when all new energy investments should support clean energy. As the International Energy Agency (IEA) writes, “Beating coal on environmental grounds sets a low bar for natural gas, given there are lower-emissions and lower cost alternatives to both fuels. The falling cost of renewable technologies in the power sector is the clearest case in point.”

According to Woodside Energy’s own reporting, using Scarborough gas for electricity would emit between 400-550kg of CO2 for every unit of megawatt-hour. This is a high-emission option compared with renewables emissions that are close to zero.

Analysts have also accused Woodside of vastly underestimating the life-cycle emissions of the project. Woodside Energy claims total CO2 emissions over the life of the project would be 878 million tonnes. This is already a staggering amount – almost double Australia’s total annual emissions. But, independent analysis has calculated actual emissions could actually be double this: over 1.6 billion tonnes.

Protest against a “gas-fired recovery”

Woodside’s expansion plans are in direct conflict with the global scientific consensus that there can be no more investment in new oil, gas and coal projects without risking dangerous climate breakdown. “Investing in new fossil fuels infrastructure is moral and economic madness”, said UN Secretary-General Antonio Guterres.

The Scarborough-Pluto proposal is a colossal expansion of fossil fuel infrastructure. It involves developing the Scarborough offshore gas field, 375 kilometres off Australia’s northwest coast, including a new pipeline to the company’s onshore Pluto processing facility on the Pilbara coast. This is in addition to the expansion of the Pluto facility.

The expansion has come under much scrutiny, and the CSIRO report is not the only study to shine a spotlight on Woodside’s questionable emission claims of this vast expansion.

A comprehensive study on the total GHG implications of the entire Scarborough-Pluto project found the emissions are significantly larger than Woodside and state government estimates indicate. The report, “Woodside’s Scarborough and Pluto Project undermines the Paris Agreement”, by Climate Analytics disproves Woodside’s argument that the project is 1.5°C compatible, representing “a bet against the world implementing the Paris Agreement.”

“The project would result in a substantial increase in Western Australia’s greenhouse gas emissions, and a significant lock-in of carbon intensive activity well beyond that of the LNG plant itself”, concludes the report.

Assessment from The Australia Institute

In addition, CCWA and The Australia Institute found that the development would result in annual carbon pollution equal to over 15 new coal-fired power stations, or over 1.69 billion tonnes (gigatonnes) of CO2 over the lifetime of the project. The climate impact is greater than the proposed Adani Carmichael coal mine. It represents the most polluting fossil fuel project currently proposed in Australia, outlines the report “Why the Scarborough LNG development cannot proceed”.

“Woodside has comprehensively demonstrated that it does not take climate change seriously and cannot be trusted to act in a responsible manner when it comes to disclosing or managing climate change and carbon risks”, it states.

“The dogged pursuit of a fossil fuel expansion program that would directly undermine the goals of the Paris Agreement has been a central feature of Woodside’s business planning over the last decade.”

What’s more, in February, Woodside released its 2021 Climate Report claiming that its company strategy aligns with meeting net-zero by 2050.

But, its plans have few real solutions or effective approaches to combat climate change. For example, its climate target excludes 90 per cent of its emissions by not covering scope 3, and the use of offsets dominates its decarbonisation strategy. The global NGO Corporate Accountability unpicks strategies such as these in their report: The Big Con: How Big Polluters are advancing a “net zero” climate agenda to delay, deceive, and deny.

The Australasian Centre for Corporate Responsibility’s (ACCR) assessment of Woodside’s plans concluded: “Woodside’s 2021 Climate Plan is far from aligned with the Paris Agreement and the urgent need to limit warming to 1.5°C.” They advise that there is sufficient reason for shareholders to vote against the approval of the report at Woodside’s AGM on 19th May 2022. 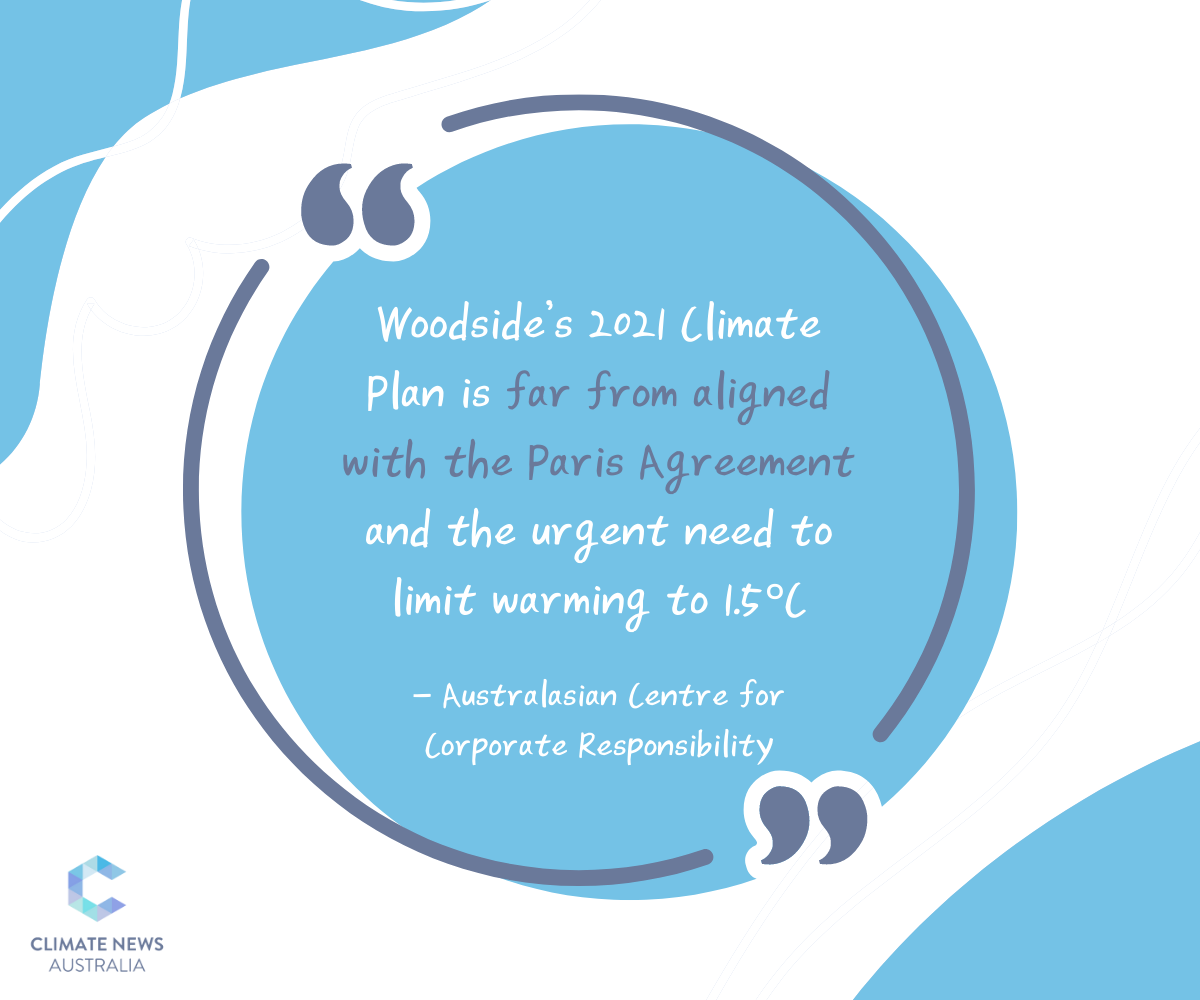 It is not only Woodside’s emissions claims that independent analysis has refuted. Experts also warn Woodside is failing to disclose its climate risk and is falling short of transparency standards required for investors and shareholders to make informed investment decisions.

“Shareholders and investors should be aware that Woodside’s public statements on climate change, including the company’s emissions reduction targets, are not credible and fall far short of what is required under the Paris Agreement”, The Australia Institute warns. “The company has failed to adequately disclose the climate change and carbon risks associated with its highly carbon intensive existing operation, or its even more polluting growth projects including the Scarborough to Pluto development.”

Further analysis from the  Global Energy Monitor warns the profitability of the Pluto expansion is highly uncertain, as LNG importing countries turn away from fossil fuels to pursue net-zero commitments. This means the project is a stranded asset risk.

This view is widely corroborated, including by Dan Gocher, director at the Australasian Centre for Corporate Responsibility. “Woodside is aggressively pursuing expansion while major trading partners such as Japan and Korea are taking active steps to decrease LNG demand, effectively ignoring the risk of stranded assets”, he explains. “Woodside has declared war on the climate by reaching FID [final investment decision] on the single largest fossil fuel project in Australia in recent memory.” 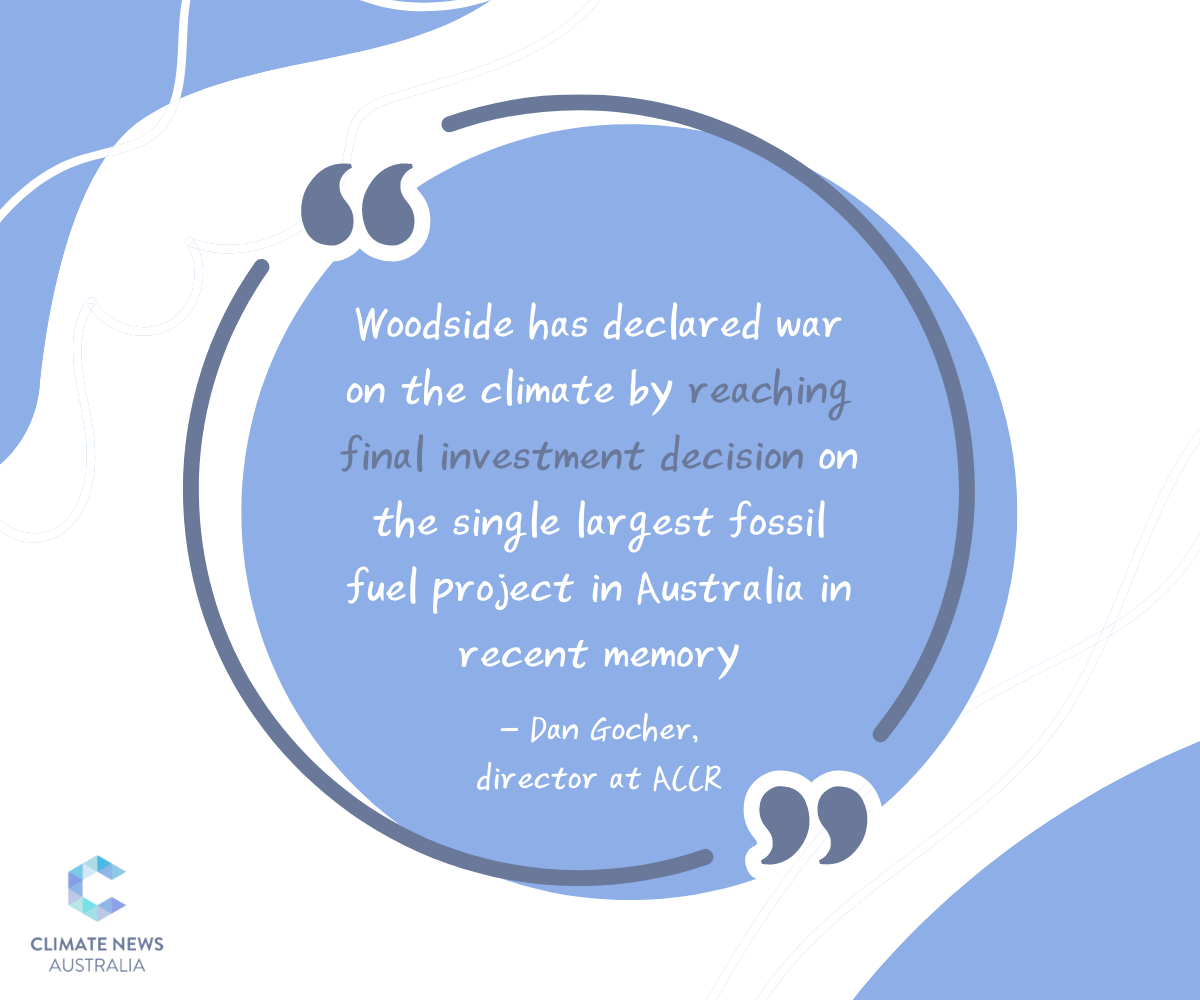