Home » New Report Shows Effects of Climate Change Worsening for Australian Farmers (Video)
Find out more about the significant impact climate change is having on Australian farmers in this video.

Australia has always had an extraordinarily variable climate, experiencing both droughts and flooding rains. But, climate change is making things worse. Winter rainfall is declining, whilst summers are becoming hotter, increasing the likelihood of bushfires. This is having “significant effects” on many Australian farmers, according to the Australian Bureau of Agricultural and Resource Economics and Sciences (ABARES).

What effect is climate change having on Australian farmers?

In the words of the ABARES Executive Director, Dr Jared Greenville, “Seasonal conditions over the last 20 years have been pretty rough for Australian farmers”. Global warming has already increased the Oceania continent’s climate by 1.44°C since national records began in 1910. “Lower average rainfall and higher average temperatures have had a negative impact on farm productivity and profit”, Dr Greenville said.

Consequently, the effects of climate change have cost Australian farms on average AUD $30,000 each year in profits over the past two decades, relative to earnings in the late twentieth century. This represents a 23 per cent cut in farm profits over the same period. Between 1950 and 2000, there was a one in 10 risk of very low farm returns due to climate variability. From 2001 to 2021, this risk had doubled to more than a one in five chance. 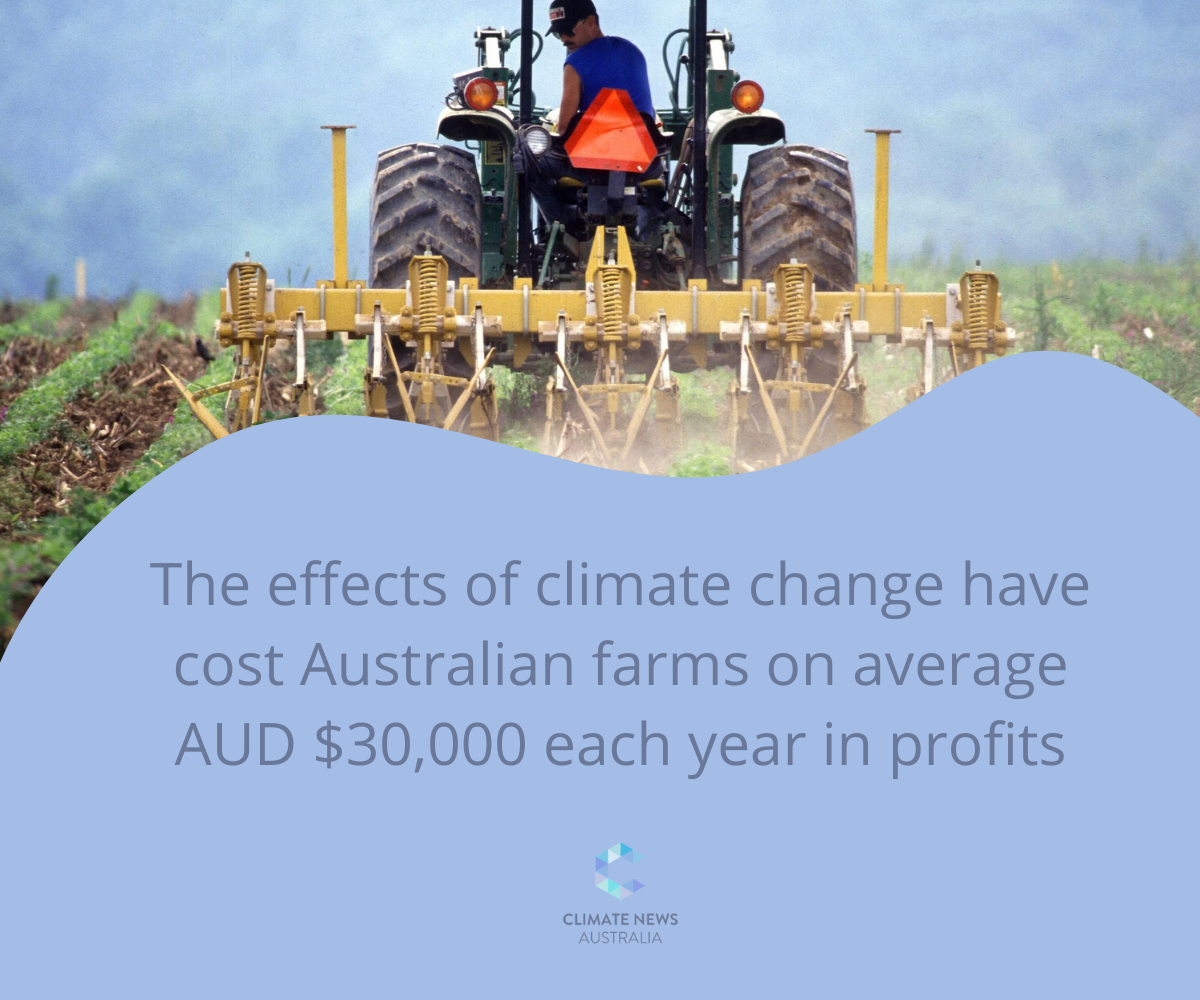 The response of Australian farmers

The ABARES research shows that Australian farmers have actually increased farm productivity significantly over the past 50 years, despite the challenging conditions. Broadacre farmers have made gains of 28 per cent compared to 1989 levels. Within this category, crops have done particularly well, raising productivity by 68 per cent since 1989.

“New technologies and practices mean that farmers are able to grow crops under lower rainfall conditions than they could in the past”, Dr Greenville said. These improvements have offset the negative repercussions of climate change over the past 30 years. As a result, industry productivity as a whole has remained stable or even improved.

Naturally, the majority of Australian farmers’ adaptation efforts are aimed at improving performance in dry conditions. Management practice changes include conservation tillage and soil amelioration. These efforts attempt to preserve soil moisture. Therefore, they help to balance out the lack of rainfall. 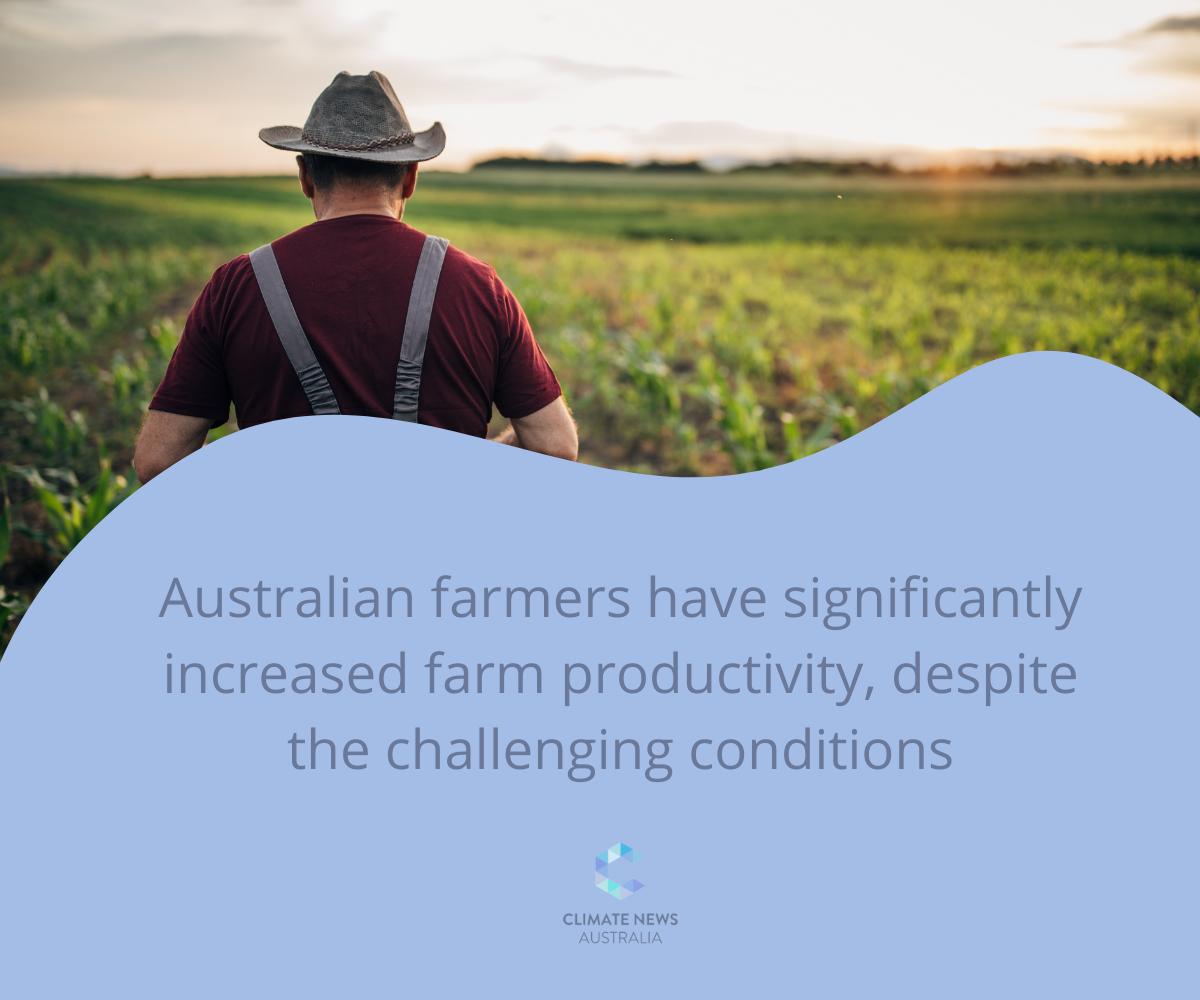 The future for Australian farmers

The ABARES report also uses climate model projections to explore possible scenarios for Australian farmers in 2050. These projections cover two emissions pathways. One assumes a limited curbing of global emissions, leading to a carbon dioxide (CO2) concentration of about 540 parts per million (ppm) by 2050. In the other, global emissions peak by 2040, limiting CO2 concentrations to about 485 ppm by 2050. ABARES combines these projections with its own farmpredict model to estimate the impact of climate change on farms.

The report reveals a broad range of future predictions which vary greatly across agricultural regions and industries. For example, it finds that Western Australia’s cropping farms will be more heavily impacted by climate change than any other region. Winter rainfall could decline by as much as 43.1 per cent. If this happens, crop yields, and therefore profits, will contract by 68.1 per cent.

Beef and sheep farms will suffer more mildly under the projections by the ABARES for global decarbonisation by 2040. The ABARES estimates that climate change will impact these farms less by 2050 than it has over the past 50 years. However, if CO2 levels continue to rise to 540 ppm by 2050, the attendant temperature increase will still have major consequences for the livestock sector. For example, beef farms in northern Australia could see 33.4 per cent less rainfall, shrinking their profits by 54.5 per cent. 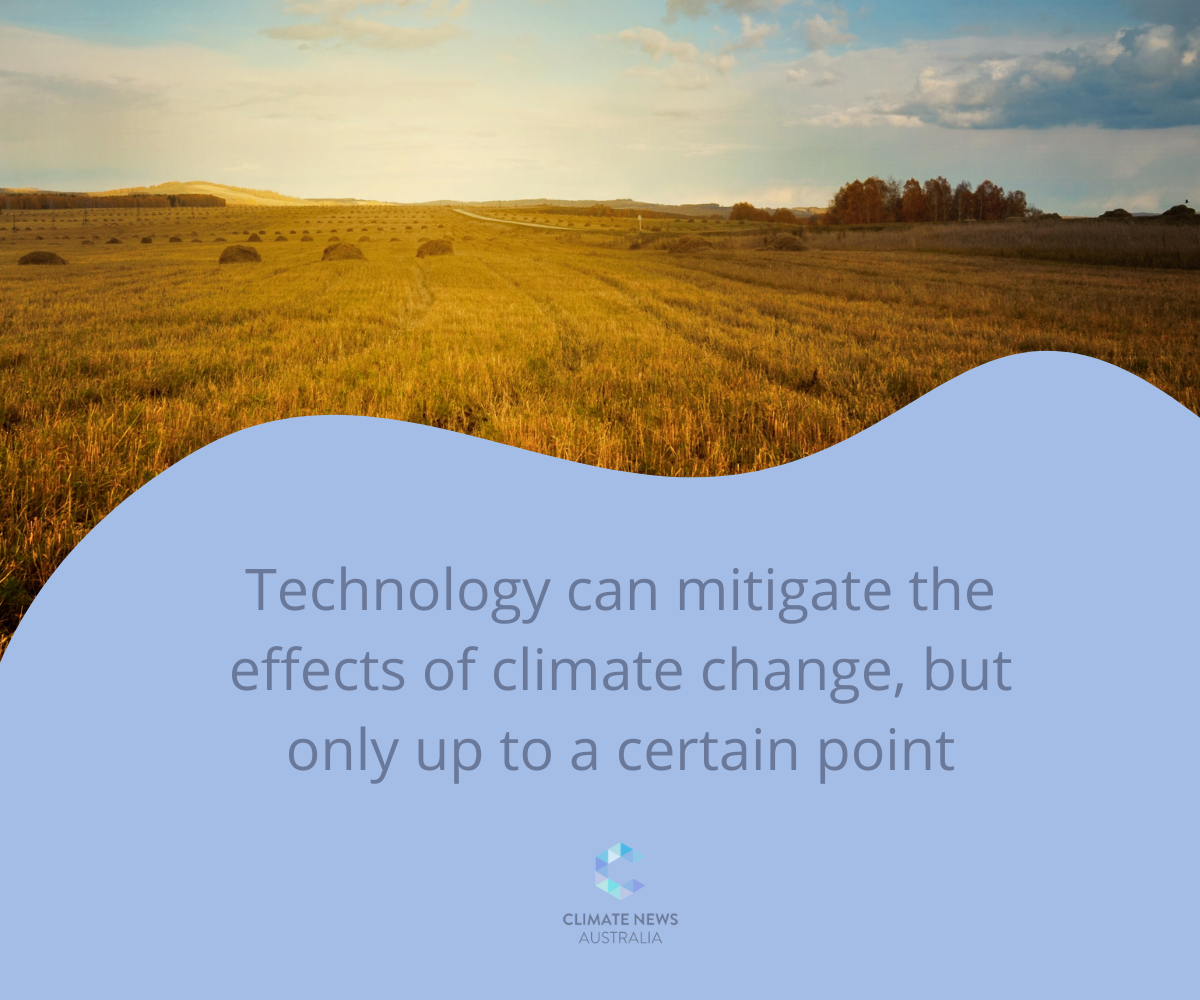 How accurate are climate change predictions?

The ABARES acknowledges that it is impossible to accurately predict the future. The report draws attention to particular uncertainty regarding rainfall in eastern Australia. This ambiguity makes adapting to the new conditions more challenging for Australian farmers.

Farmers may have made considerable and successful adaptations to drier and hotter conditions since 1989. But, there are limitations to this. Already, farm profits are more sensitive to drought impacts over time. This means that the gulf between profits in normal and drought years has grown bigger, despite an increase in average farm productivity and profit.

Technology can mitigate the effects of climate change, but only up to a certain point. It is possible that future productivity gains can offset even the worst climate projections by 2050. Nevertheless, these gains are far from certain. Even if they were made, Australian farmers could still end up less competitive against international competitors if their countries are less affected by climate change. 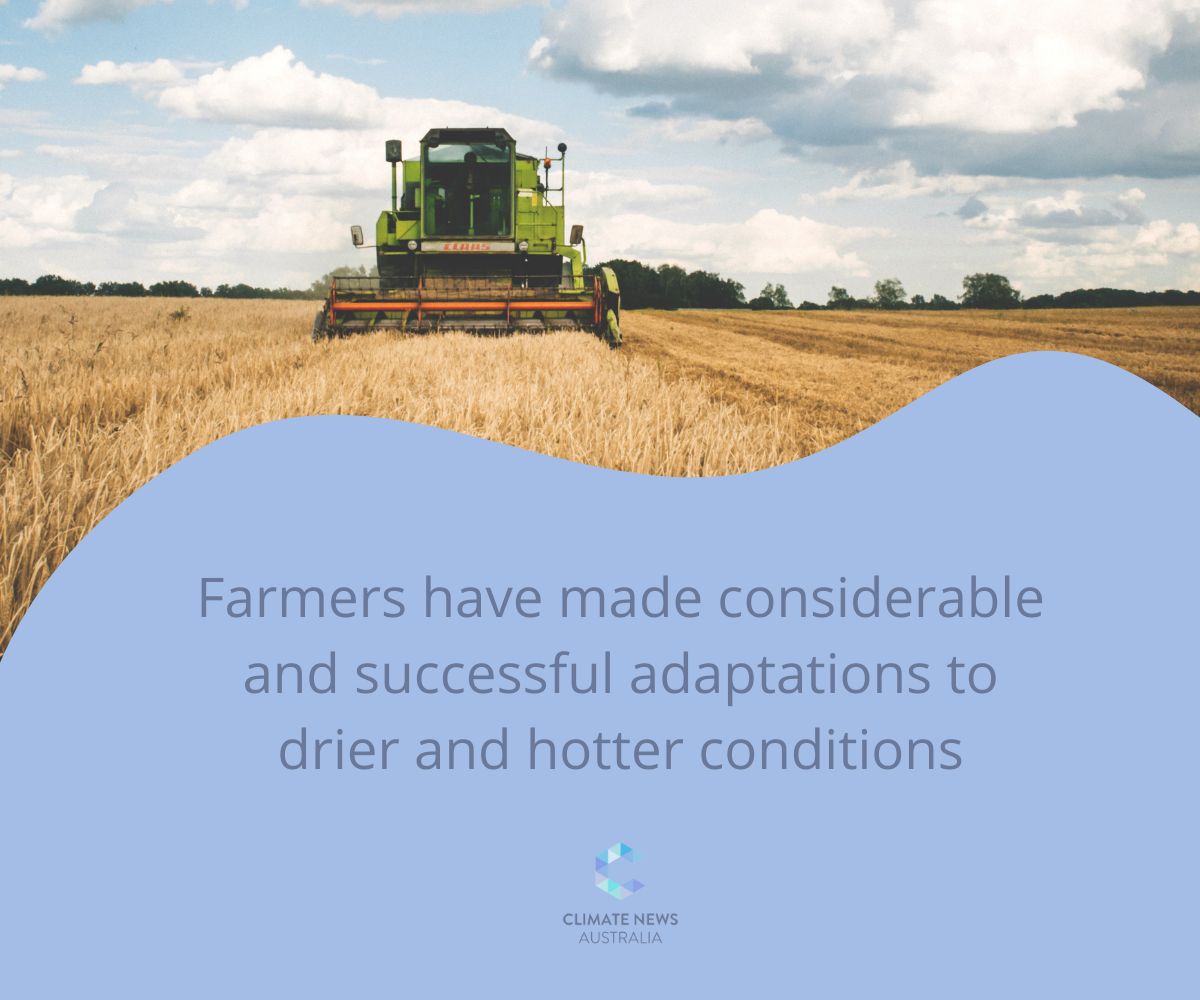 Australian farmers could invoke certain changes that will help them adapt to the conditions predicted by ABARES. There could be a movement away from cropping, particularly in areas where rainfall is expected to suffer its greatest decreases, such as Western Australia. Instead, farmers could turn to livestock and mixed farming. This shift has already begun in some regions over the past ten years and is likely to continue as the effects of climate change worsen. 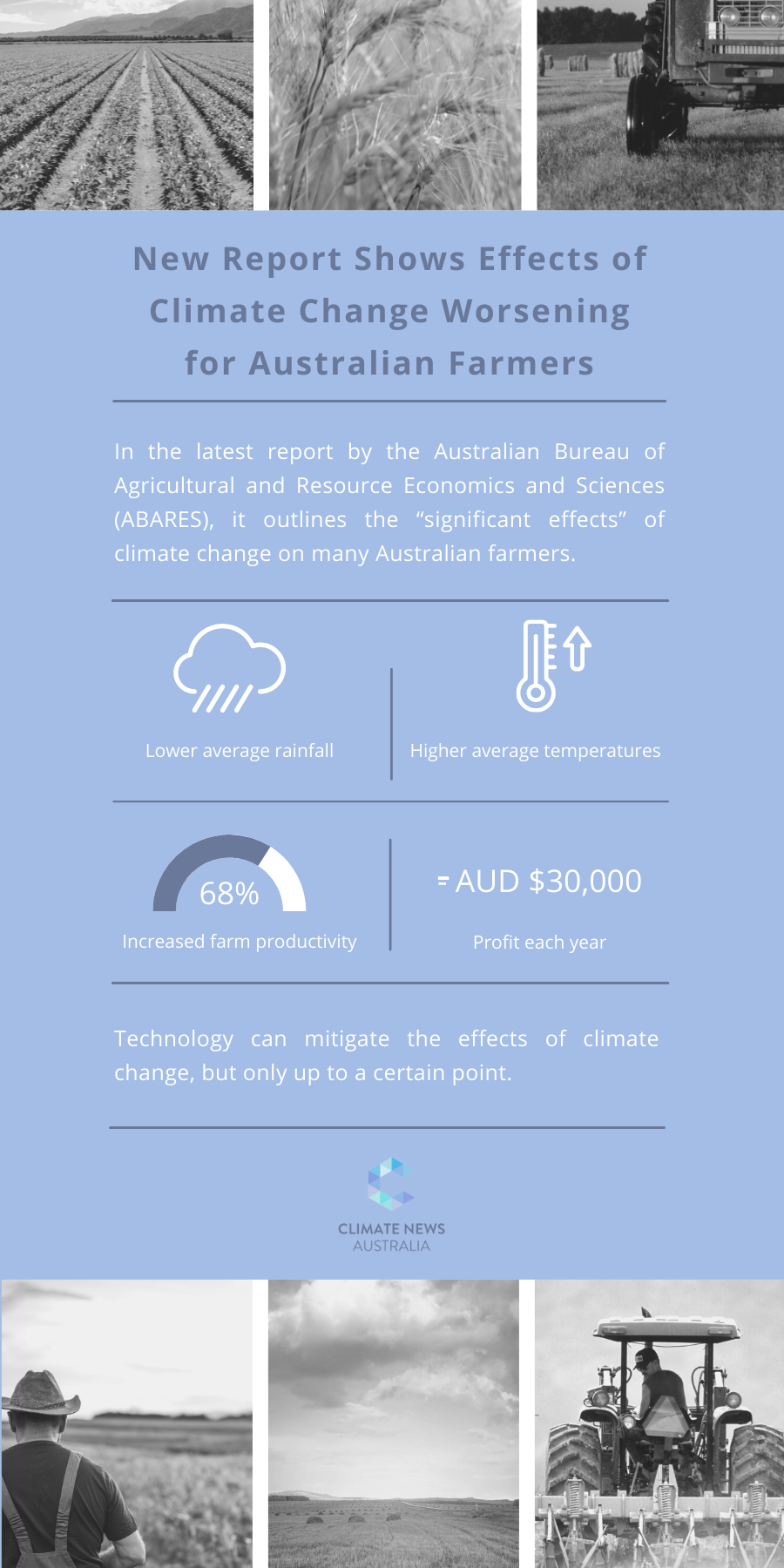