Home » Net Zero Commitments to Cut Australian Coal and Boost Renewable Energy Exports (Video)
Watch this video to to find out what net zero commitments some countries have made and how this could benefit Australia.

Japan, South Korea and China have all made net zero commitments by 2050 or 2060. These countries are also Australia’s largest export partners. They account for about two-thirds of fossil fuel exports. The Reserve Bank of Australia has conducted a study on the impact promises to decarbonise will have on Australia’s coal industry. There is a significant risk that any further investment in coal will result in stranded assets.

China, Japan and South Korea collectively account for about 25 per cent of the world’s fossil fuel consumption. Coal, oil and natural gas dominate the energy generation in each of these countries, providing more than 85 per cent of their energy. This is above the global average of 80 per cent. It is also far higher than countries like France, the US and Spain with 51 per cent, 60 per cent, and 74 per cent respectively. 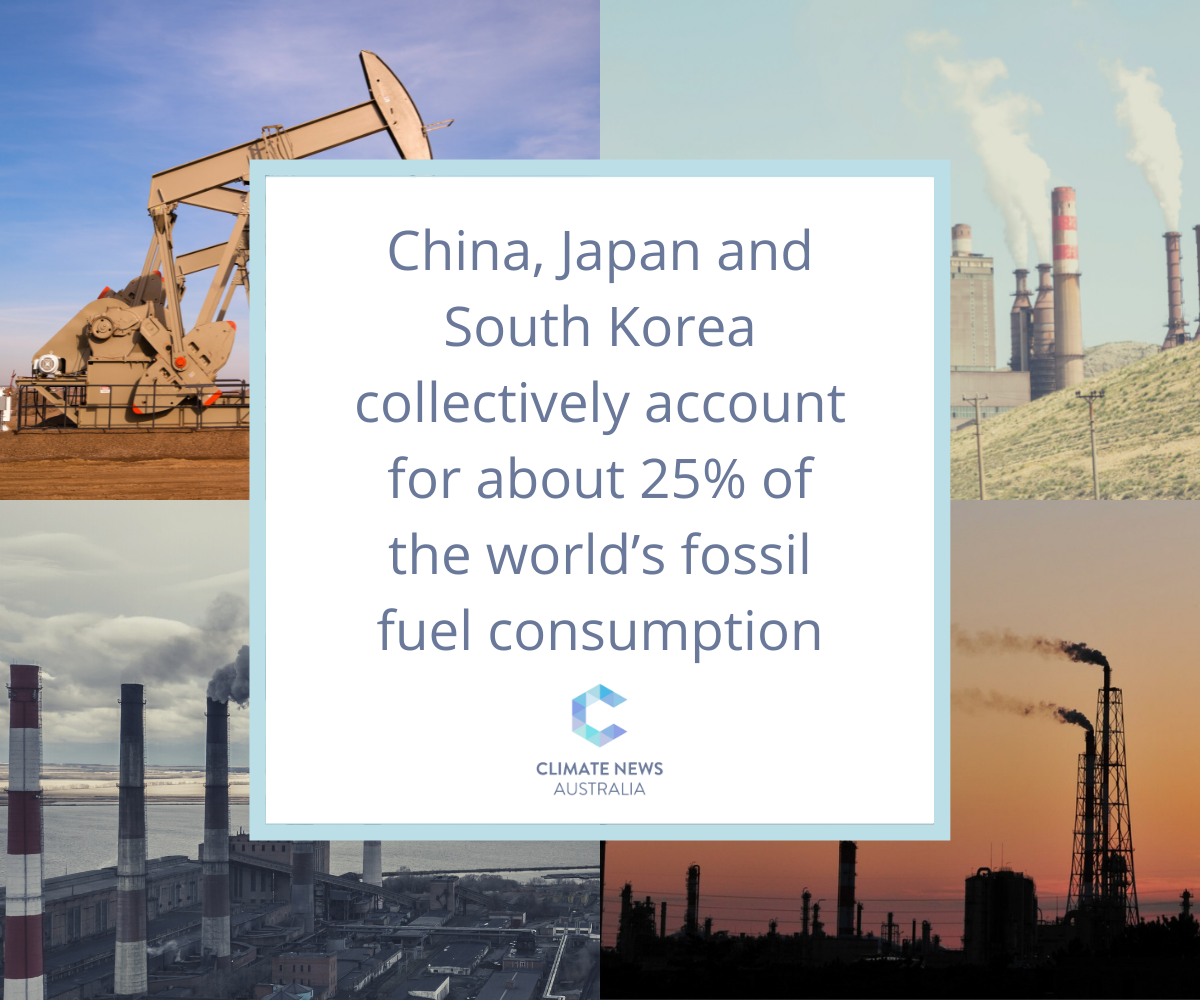 What net zero commitments have these countries made?

In September 2020, China pledged to peak its carbon dioxide (CO2) emissions before 2030 and reach net zero emissions by 2060. This is significant given that it is the world’s biggest polluter, responsible for about 30 per cent of all emissions. It surpasses the emissions from all developing countries combined, with over 14 million tonnes each year. Nevertheless, China also has the largest population on the planet. Per capita, its emissions are actually below those of the US, with 9.2 tonnes compared to 16 tonnes per capita.

Achieving China’s climate goals involves increasing the country’s non-fossil fuel share of primary energy generation to 20 per cent by 2025 and 25 per cent by 2030. It also requires an expansion of solar and wind power to 1200 gigawatts (GW) by 2030. This is entirely feasible given China’s history of overachieving its renewable energy targets. The world’s second-largest economy is already the world’s greatest producer of wind and solar energy and the biggest domestic and outbound investor in renewables.

Japan is the fifth-worst emitter of greenhouse gases. Following the 2011 Fukushima nuclear disaster, the country removed nuclear power from its energy mix entirely. This has led to a greater dependence on dirty fossil fuels. Oil provided 40 per cent of Japan’s energy in 2019. This exceeded all other energy sources, including coal at 26 per cent, natural gas at 21 per cent and nuclear energy at just under 10 per cent.

However, Prime Minister Yoshihide Sugathey has made a commitment to attain net zero emissions by 2050. His government has also set a target to reduce emissions by 46 per cent in 2030 relative to 2013 levels. This necessitates phasing out coal as a principal power source. In its place, they aim to double renewables’ share of electricity power generation to 36-38 per cent by 2030.

South Korea is the fourth-largest importer of coal in the world and the third biggest investor in overseas coal projects. Fossil fuels dominate its energy mix. Oil and other petroleum liquids make up 43 per cent of the total. Coal accounts for 28 per cent. Renewables lag behind at just three per cent. This is the lowest share amongst any developed country member of the International Energy Agency (IEA).

To improve this, President Moon Jae-in is committing the country to carbon neutrality by 2050. He intends to replace coal power with renewable energy under a Green New Deal. In addition, the South Korean parliament approved a climate change bill in September 2021. It mandates a 35 per cent or higher reduction in greenhouse gas emissions by 2030, compared with 2018 levels.

How do these net zero promises affect Australia?

Fossil fuels make up a significant proportion of Australia’s export goods. They account for about one-quarter of all exports. Two-thirds of these go to China, Japan and South Korea. Thermal coal comprises four per cent of total exports. Coking coal represents a further seven per cent. Oil exports make up another two per cent. Coking and thermal coal are responsible for about 80 per cent of CO2 emissions from Australia’s fossil fuel exports. Coal currently represents over half of the country’s energy exports.

By pledging to reduce fossil fuel consumption over the coming decades, the decisions made by China, Japan and South Korea will inevitably have repercussions for Australia’s exports. The Reserve Bank of Australia includes several climate scenarios designed by the Network for Greening the Financial System to predict these impacts. The only scenario in which coal exports increase is the baseline scenario. This is where very little progress in reducing global emissions is made and the world’s CO2 emissions are slightly higher than 2020 levels in 2050. 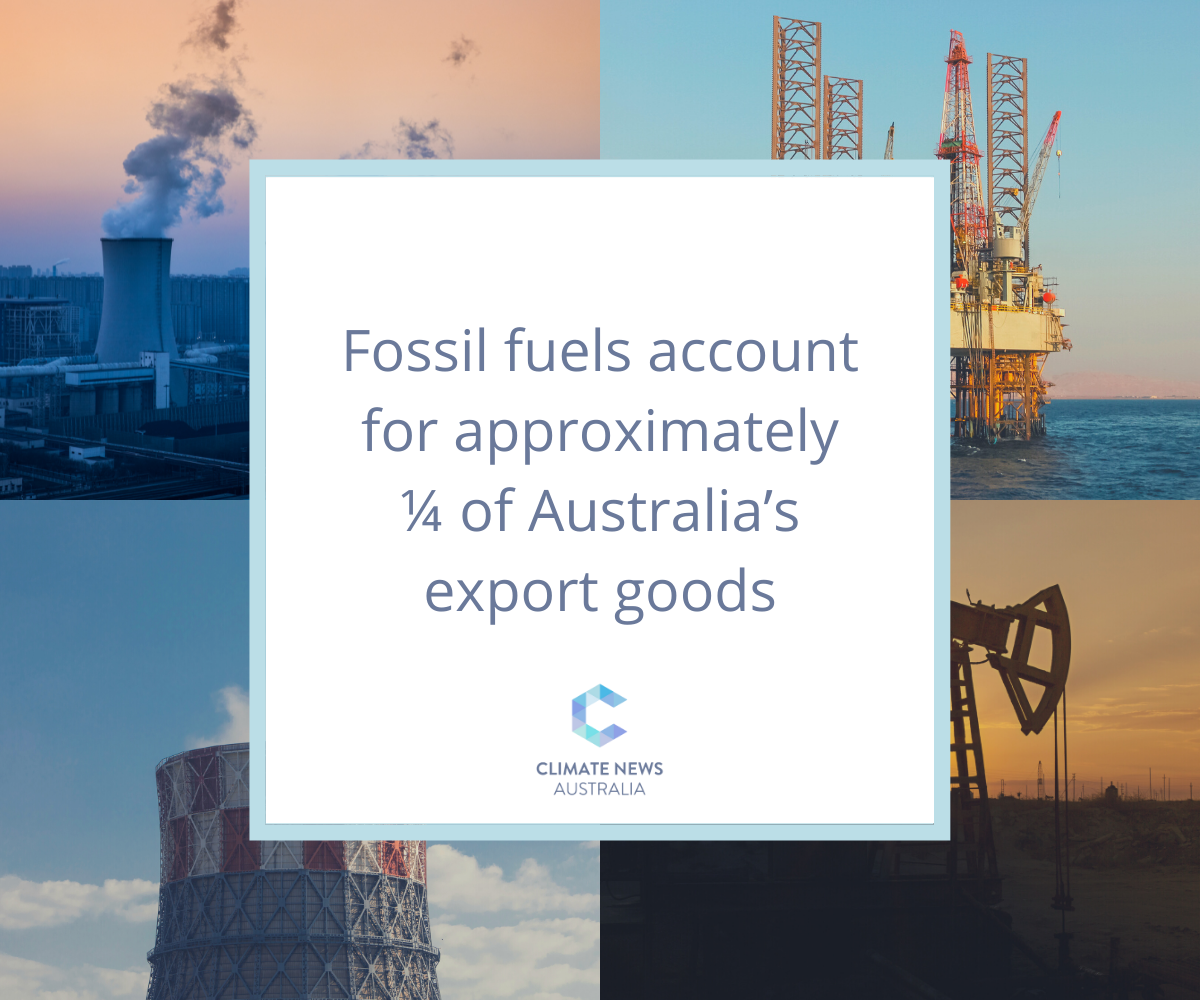 In all other climate scenarios included in the report, the volume of Australian coal exports falls. In some cases, this decline can be dramatic. For example, under scenarios in which global warming is kept below either 2°C or 1.5°C in line with the Paris Agreement, coal exports fall by 80 per cent by 2050. A reduction in demand from China, Japan and South Korea accounts for around two-thirds of the decrease in these instances.

Given these predictions and the growing number of international net zero promises, it seems apparent that Australia’s fossil fuel exports face an unavoidable slump. Declining demand and prices would place Australian investments into coal at considerable risk of becoming stranded assets. Australia’s current coal reserves already exceed projected export demand to 2050 in the 2°C and 1.5°C scenarios. As the Reserve Bank of Australia notes, “this suggests there is potential for ‘stranding’ even if there is no investment into new mines.”

On the other hand, Australia is also well placed to benefit from the net zero promises of its trading partners. The Oceania continent has the potential to become an important renewable energy export market in the region. The energy industry is proposing a number of huge export projects of green hydrogen, such as the AUD $100 billion Western Green Energy Hub. If completed, it will be the largest renewable energy hub in the world.

Similarly, decarbonisation involves a greater uptake of electric vehicles. As demand for these vehicles and their batteries rises, it creates export opportunities for Australian lithium, nickel, cobalt and other minerals. Therefore, global efforts to combat climate change do not necessarily result in an economic hit for Australia. On the contrary, they simply shift demand from dirty fossil fuels to clean energy sources, which can be both good for the planet and for exports. 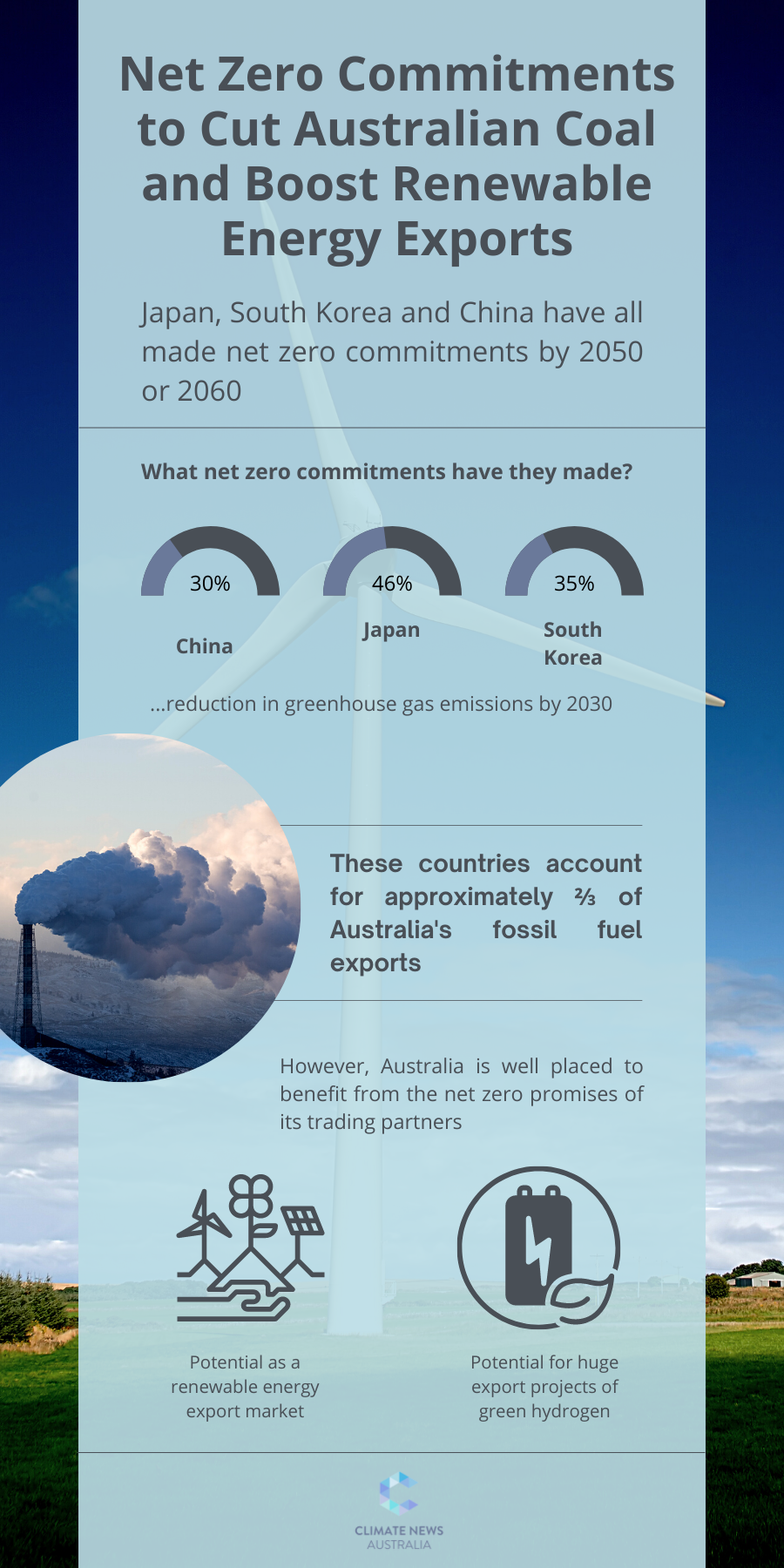