This video compares natural gas vs. LPG and outlines the various options, prices and their effects.

If you are concerned about the climate, the natural gas vs. liquefied petroleum gas (LPG) debate has a clear winner. Read on to find out about the climate effects of each fuel. Then, scroll down further for a gas price comparison and the best energy options for your home.

Natural gas vs. LPG: What is the difference?

Natural gas and LPG have distinct chemical makeups. This means that they are two different gases. Natural gas is methane gas. On the other hand, LPG can be propane or butane, or a mix of the two. However, the two fuels are linked.

LPG is a product of natural gas processing. The gas industry refines LPG from the raw natural gas it extracts from the ground. Also, the industry can source LPG when it refines crude oil.

Natural gas is a fossil fuel. It is mostly made up of methane. The gas forms underground in rock formations. Such formations include sandstones, coal seams and shales.

Humans use this gas as fuel. However, certain industries also use it to create materials and chemicals. Miners extract this natural gas from deep underground. Then, the gas industry transports the fuel in pipelines to users.

What is LNG (liquefied natural gas)?

The gas that makes up LPG varies from country to country. For example, LPG is propane gas in Australia. However, in other countries, LPG is a mix of propane and butane gas. For example, this is the case for many countries in Europe, such as Belgium, Hungary and Italy.

LPG is a product of the oil refining process. But, miners can also extract it during the natural gas production process. Unlike natural gas, Australians do not receive LPG via pipelines. Instead, the gas industry transports the fuel in LPG cylinders. These are also known as gas bottles.

LPG vs. natural gas: Which is better for the climate?

LPG and natural gas are both fossil fuels. Natural gas will not help solve the climate crisis. That is the view of the Climate Reality Project. On the other hand, LPG advocates say that it provides greener and cleaner energy than natural gas.

The natural gas industry drives climate change. The Climate Council, Australia’s leading climate change communications non-profit organisation, blames the fuel for keeping Australia’s official emissions so high. The leading cause that the organisation points to is “fugitive emissions”. These are gas emissions that occur before gas is burned. The Climate Council claims that fugitive emissions in Australia have risen 46 per cent since 2005.

How are methane emissions worse for the climate than carbon dioxide?

These rising emissions are of concern because natural gas is mostly methane. Methane is a greenhouse gas. It heats up our atmosphere much more than carbon dioxide (CO2) in a short period. In fact, up to 100 times more than CO2.

Australia’s techniques for measuring methane emissions from the natural gas industry are out-of-date. For instance, the country bases its measurements on old analyses conducted in other countries. As a result, Australia underreports its methane emissions. Therefore, Australia’s total greenhouse emissions may be 10 per cent higher than reported. This means that Australia contributes more to global climate change than previously thought. Consequently, leading scientists have warned against an expansion of Australia’s gas industry.

Scientists say that the same measurement issue exists in other countries too. Consequently, the fossil fuel industry underreports methane emissions globally. This could be by as much as 40 per cent.

Natural gas is not a transition fuel

The Australian government promotes a larger role for natural gas in Australia. Prime Minister Scott Morrison called natural gas an “important transition fuel” in 2020. He believes that Australia should use natural gas to create electricity rather than coal. Therefore, the government has invested in a number of gas projects. But, Morrison has not set a date for when renewable energy sources will completely replace gas-fired electricity. Instead, he simply argues that Australia’s energy transition must involve the “greater use of gas”.

Australia’s chief scientist from 2008 to 2011, Penny Sackett, is against this idea. She maintains that Australia must decrease its use of natural gas now, not increase it.

This is because the switch from coal to gas does not offer any climate benefit, according to a 2020 study from the US. It is true that natural gas may reduce CO2 emissions. However, the natural gas industry’s methane leaks erase these benefits. 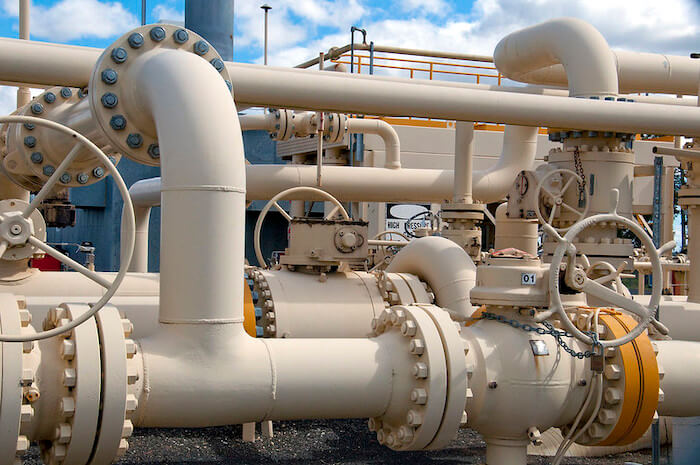 “Pipes at compressor station” by Jeremy Buckingham MLC is licensed under CC BY 2.0

LPG has a limited climate effect

At first look, it may seem that natural gas is less polluting than LPG. That is because propane gas emits slightly more CO2 than natural gas when we use it as fuel. Both gases emit much less CO2 than coal. However, unlike methane, propane is not a greenhouse gas.

LPG is also more energy-efficient than natural gas. In fact, propane contains twice the amount of energy content compared to methane. This means that less fuel needs to be burned. Also, this reduces emissions.

Fugitive LPG emissions are not a climate problem

LPG does not have the same problem with fugitive emissions as natural gas. The gas industry may accidentally release propane before we burn it as fuel. But, this has no impact on the atmosphere. Spilled propane becomes a harmless vapour. In fact, it is not harmful to the soil or water sources either. Furthermore, propane is non-toxic to humans, birds and animals.

These facts have led climate-conscious heating providers to consider propane, an environmentally friendly fuel. They say that it does not have a detrimental impact on the environment. This is the case both before and after combustion.

LPG only occurs naturally in combination with either natural gas or crude oil. Therefore, miners have had to extract it when they process these polluting fuels. This means that traditionally, LPG is a by-product created by the fossil fuel industry. However, some companies have proposed a new type of product that does not need fossil fuels. It is called bioLPG. These companies extract the gas from food waste or vegetable oils. This lowers the fuel’s CO2 emissions. Advocates say that it reduces emissions by up to 80 per cent.

Furthermore, there have been efforts to create renewable LPG. In 2014, scientists developed a new biosynthetic process. This process indirectly converts sunlight to propane. However, as of 2019, renewable LPG was not commercially viable. 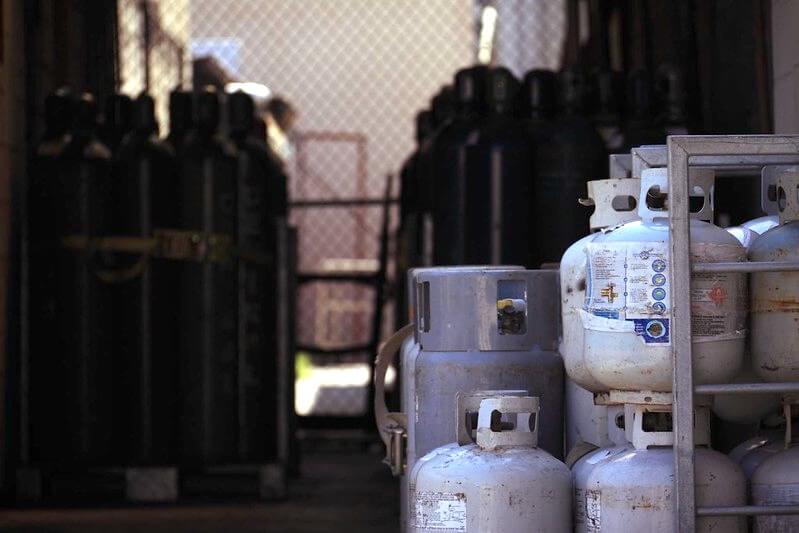 “Gas Cylinders” by andrewasmith is licensed under CC BY-SA 2.0

Natural gas vs. LPG: What does Australia use them for?

Australians use both types of gas. Utility companies supply natural gas directly to homes via a mains pipe. Households use it for cooking and heating water or their homes.

However, to use LNG, households need to buy a cylinder. Then, you can connect the cylinder to a specific appliance, such as an outdoor heater or barbeque. Many regional areas in Australia are not connected to natural gas pipelines. Therefore, LPG is a popular fuel in these areas.

Can you use LPG in place of natural gas?

The result of the above comparison of the climate effects of natural gas vs. LPG is clear. It shows that natural gas is worse for the climate than LPG. So, you might consider a switch to this fuel. However, gas home appliances can only work with either natural gas or LPG. Therefore, you must choose appliances that are specifically designed for LPG use.

LPG vs. natural gas: Which is a cheaper gas supply?

Natural gas is cheaper than LPG per megajoule in Australia. However, natural gas users must pay a “supply charge”. Therefore, LPG is a cheaper option for households that do not use much gas, for example, if they only use LPG for hot water or cooking.

The cost of natural gas has also risen steeply in recent years. What is more, it is unlikely these prices will fall. Currently, most of Australia only has expensive unconventional natural gas resources.

Natural gas vs. LPG vs. electricity

This article has focused on comparing natural gas vs. LPG. However, in many cases, electricity is the cheapest fuel for household applications. For example, a reverse-cycle air conditioner is an option for heating water and living spaces. This is a type of air-source electric heat pump. Using this could significantly reduce a home’s energy bill compared to natural gas heating. Also, another option is switching from a gas to an electric induction cooktop.

There is also an electric option to heat water in homes and businesses. In fact, hot-water heat pumps may be the cheapest option. This is especially the case if the building has solar panels installed. The International Energy Agency indicates that hot-water heat pumps sales are rapidly accelerating globally. The organisation says that the technology will help to slow down climate change.

Unlike natural gas and LPG, renewable energies do not emit CO2 and other greenhouse gases. Therefore, electric appliances will become increasingly climate-friendly in Australia. That is because the country will use more renewable energy to generate electricity in the future. Already, the amount of solar and wind-generated electricity has increased quickly in Australia. In fact, this has happened faster than anywhere else in the world. In more good news, this has coincided with an electricity-price drop.

Household gas use under threat

There are now political proposals to ban natural gas connections in homes. These are most advanced in Victoria. This could reduce greenhouse gas emissions by 40 to 50 per cent in the state. Also, the ACT government provides support for households to switch from gas to electric appliances. It cites both climate and money-saving benefits.

Now is the time to move away from natural gas use in your home. LPG is a better option for the climate. However, as it still produces some greenhouse gas emissions, consider electric options instead. They could provide your family with long-term savings. They will also help to save the climate.