Time may soon be up for natural gas heaters. That is because the fuel has a negative impact on the climate. Due to this, there are rising calls to phase out gas use in buildings and houses. For example, the City of Yarra in Melbourne has promised to switch council buildings from gas to electricity by 2030. Additionally, the council has put pressure on the state government to ban natural gas connections in new homes. That would fit with Victoria’s environmental policies. Specifically, the government plans to cut greenhouse gas emissions by up to 50 per cent by 2030.

This move by the City of Yarra was praised by the Climate Council’s senior researcher, Tim Baxter. It is part of “responsible climate action”, he says. “The best time to start replacing residential gas with cleaner, healthier, more efficient solutions is now”, he added.

Likewise, the Australian Capital Territory (ACT) also plans to phase out natural gas use in homes. That will happen over the next few decades, says Shane Rattenbury, the ACT’s Minister for Energy, Water and Emissions Reduction. The territory aims for zero net greenhouse gas emissions by 2045. Therefore, the natural gas phase-out is key to this plan.

How to generate heat more efficiently

What are the different types of natural gas heaters?

There are many different types of natural gas heater available. For example, there are portable options, such as convection and radiant convection heaters. Such appliances are unflued, which means that they do not have an exhaust pipe attached to them. This pipe prevents your room from being filled with fumes when you use the heater.

If you have a portable or wall mounted gas heater, it is recommended that you install a carbon monoxide alarm at home. In particular, portable gas heaters can fill small rooms with carbon monoxide and other toxic fumes. Therefore, in Australia, there are restrictions on where you can use these wall mounted gas heaters in your homes. Furthermore, natural gas heaters are linked to childhood asthma, according to studies. But, flued gas and central ducted heaters may reduce this risk. Natural gas burns are also not uncommon. 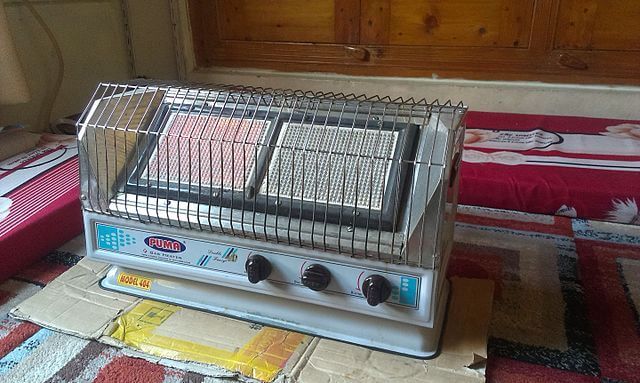 Natural gas is not clean

The fact that natural gas contributes to climate change is unsurprising. After all, it is a fossil fuel. However, you may not know the extent of its impact on the climate. Indeed, nearly 20 per cent of Australia’s greenhouse gas emissions come from natural gas, the Grattan Institute published in 2020.

You may have heard that natural gas is a clean transition fuel. In other words, it will help Australia move away from coal towards renewables to generate electricity. However, this is not the case. That is because a major part of natural gas is methane.

Unfortunately, methane is a greenhouse gas. This means that – like carbon dioxide (CO2) – it heats up our planet. In fact, methane traps even more heat in the atmosphere than CO2 – 120 times more heat than carbon dioxide. This makes methane even worse than previously thought, according to recent research.

Of course, when we burn natural gas, it releases methane. On top of this, methane escapes in other ways too, namely when the gas industry mines and transports the fuel. These are known as upstream emissions. But, the gas industry does not measure them accurately. As a result, the Australian government cannot know their emissions for certain. Therefore, it is possible that the government may underestimate the country’s greenhouse gas emissions by about 10 per cent.

Natural gas can be worse than coal

In some cases, natural gas may be worse than coal for the climate in the short term. That is the finding of a 2020 report from the Institute for Energy Economics and Financial Analysis. This is because of the “release of methane into the atmosphere”, says the institute. In fact, it takes just two to three per cent of methane to leak for natural gas to be worse than coal.

The above information explains why the United Nations (UN) has turned its attention to methane. Put simply, humans must half methane emissions by 2030, says the 2021 UN report. Consequently, we could avoid 0.3°C of heating the planet by 2045.

Therefore, we have good reason to move on from natural gas heaters. So, what are the environmentally friendly options that can be used instead?

What is the cleanest way to heat your home?

There is only one way to heat your home without greenhouse gas emissions – with electric appliances. At the moment, this can be done in two ways:

Renewable energy will only make electric appliances cleaner. In 2020, renewable energy generated nearly 28 per cent of Australia’s total electricity. Some states are already far ahead of this. For example, Tasmania produced more renewable energy than it used in 2020. This means that if you use an electric heater in Tasmania, you do not create any greenhouse gas emissions.

Australia could be powered by 100 per cent renewable sources by 2040. The Australian Energy Market Operator stated this in a 2020 report. What is more, for this to happen, renewable energy progress need only to remain on par with current developments.

Is it cheaper to heat with natural gas or electricity?

Often, electricity is cheaper than natural gas for household applications, including heating. Namely, a reverse-cycle air conditioner can be a great option to heat your home. It is much cheaper to run this type of air-source electric heat pump compared to natural gas heaters, according to several Australian studies.

For example, we can look at the case study of the Melbourne home of energy advisor, Tim Forcey. He replaced his ducted gas system with an air conditioner. Over a few years, this set him back only one-third of the cost of his old gas heater. That is a 67 per cent saving.

In most states in Australia, electric appliances save money in new homes compared to gas. Specifically, these states are Queensland, New South Wales (NSW), South Australia and the ACT, according to the Grattan Institute. That is because natural gas prices will never be low in these locations again, although they used to be in past decades. The reason for this is that there are no cheap sources of gas left in Australia’s eastern regions.

Many people are turned off by the potentially high costs of electric appliances. However, these appliances pay for themselves over time, according to the Grattan Institute. Take the example of a new house in NSW. Efficient electric – rather than gas – appliances will save a house owner about AUD $400 per year. Moreover, these appliances pay back their upfront cost in about seven years. Plus, a house with solar panels would save even more.

Not all gas heaters run on natural gas. In addition, there are LPG gas heaters. These heaters may suit smaller spaces, such as warehouse offices or mobile homes. That is because LPG is a portable fuel. What is more, these heaters are usually easy to install.

Can you run a natural gas heater on LPG?

Is LPG heating better for the environment than natural gas?

LPG gas is cleaner than natural gas. That is because LPG commonly refers to propane in Australia. Unlike methane, this gas does not trap heat in the atmosphere. Furthermore, propane is more energy-efficient than natural gas. However, propane does release CO2 when you burn it. Again, the only possibility to heat without emissions is electric appliances.

Natural gas is no longer a cheap fuel. Also, we now know that it is not climate-friendly either. So, natural gas heaters are not a good fit for new homes. But, switching your gas for an electric heat pump can be cost-effective. Also, that is the best option for the environment.