How Well Does Australia Adhere to the Paris Agreement?

Home » How Well Does Australia Adhere to the Paris Agreement?

In April 2021, Australian Prime Minister Scott Morrison gave a speech at a world climate conference. Accordingly, he spoke about Australia’s commitment to preventing climate change. Specifically, he referred to the Paris Agreement. Australia is “well on the way to meet and beat our Paris commitments”, he stated.

But, can we take Morrison’s word for it? To answer this, it would be useful to understand exactly what the Paris Agreement is. Let us first look at how it came to be.

What did the United Nations Framework Convention decide?

Before the Paris Agreement, there was the United Nations Framework Convention on Climate Change (UNFCC). UN member states established it in 1994. Now, 197 countries are part of this convention. Consequently, these countries have agreed to limit human interference regarding the climate. Their primary focus is to reduce greenhouse gas emissions.

In 2015, 196 of the UNFCC countries adopted the Paris Agreement. The Agreement’s aim is to keep global warming to “well below 2°C”. That is compared to temperatures before the industrial revolution. On top of this, the Paris Agreement says that countries should try to limit warming to 1.5°C. For this purpose, each country created their own climate actions plans. These are called nationally determined contributions (NDCs).

What is Australia’s NDC?

Australia first outlined its NDC in 2015. Therefore, the country is now committed to reducing greenhouse gas emissions across its whole economy. Australia aims to reduce these emissions by 2030, namely a reduction of 26 to 28 per cent from its 2005 emissions levels. In 2020, Australia was due to update this target. However, the country made no changes.

Are greenhouse gas emissions in Australia lowering according to plan?

The government’s own emissions records suggest that Australia has fallen behind its NDC. The country is only on track to cut emissions by 22 per cent by 2030. Consequently, the UN highlighted Australia in its 2020 Emissions Gap Report. The country was one of five G20 members that would fall short of its Paris Agreement commitments, said the report.

Australia’s climate target is too low

Furthermore, the 26 to 28 per cent target is too weak to effectively address climate change. In fact, Australia’s Climate Change Authority recommended a 45 to 65 per cent emissions reduction target in 2015. But, the federal government seemingly ignored the advice of its own expert advisory body.

Australia’s climate action is “insufficient” for the Paris Agreement

The Climate Action Tracker (CAT) provides scientific analysis of government climate action. Plus, it measures this against the goals of the Paris Agreement. The Climate Action Tracker rates Australia’s Paris Agreement target as “Insufficient”. That is, it will not keep global warming below 2°C. In fact, if all countries had similar NDCs to Australia, the world could reach 3°C warming. 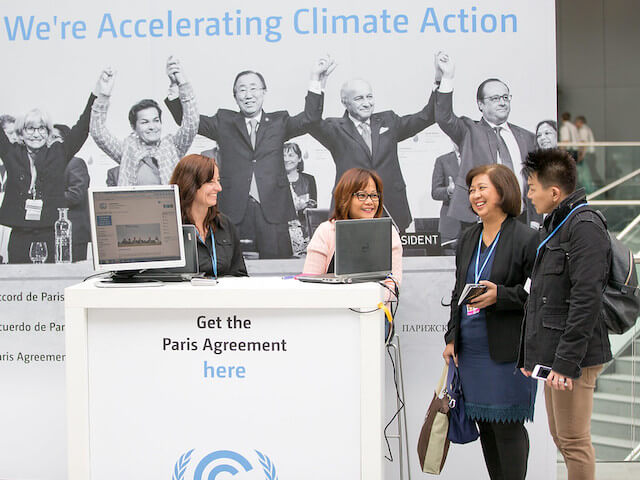 Australia’s pledge under the Paris Agreement is not enough. Instead, it should aim to cut its emissions by 50 to 74 per cent by 2030. That would allow the country to play its part to limit global warming to 2°C and 1.5°C, respectively. That was the finding from a 2021 Climate Targets Panel report.

However, Australia is not alone in this regard. Currently, all countries’ collective pledges under the Paris Agreement are not ambitious enough, say experts. In other words, their NDCs will not limit warming to even 2°C.

What are the global emissions goals?

In 2019, the UN recommended that countries aim to cut global emissions by 7.6 per cent every year for the next ten years. That would allow them to meet the 1.5°C Paris Agreement target. Conversely, the world is currently heading for a 3.2°C temperature rise, noted the global body. This is despite the required technologies and policy knowledge to cut emissions already being available.

In 2020, the UN released a new report focused on global emissions. The climate pledges from all countries under the Paris Agreement remained “woefully inadequate”, it stated. Specifically, the levels of ambition in the Paris Agreement must be tripled to limit global warming to 2°C. To stop it at 1.5°C, countries must increase their ambition fivefold, stated the report. Therefore, the UN called on countries to implement a “green recovery” from the COVID-19 recession. By 2030, that could reduce global emissions by 25 per cent. Consequently, the world body asked countries to strengthen their emissions pledges in 2021.

Fortunately, some countries have proposed more ambitious climate targets in 2021. That includes big polluting countries. For example, the United States, China, Japan and the United Kingdom. Plus, the European Union has a joint target in place for its member countries. Therefore, these nations will increase their use of renewable energy. The idea is that this will help them to reach net zero emissions in the coming decades. 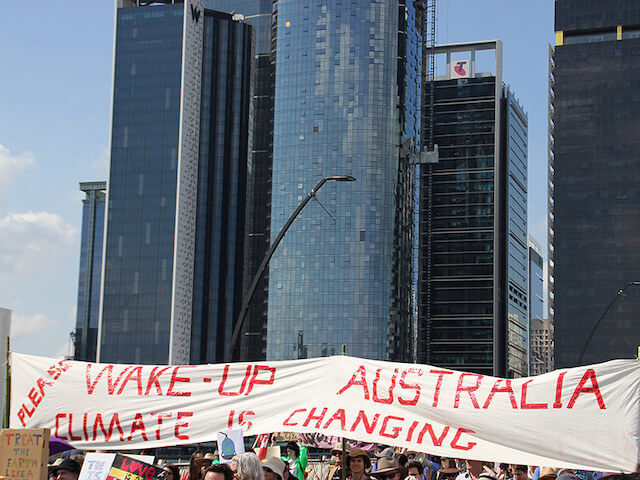 Net zero emissions mean humans “not adding new emissions to the atmosphere”, according to the UN. In 2020, the world body described this as “a big task, requiring ambitious actions starting right now”. But it is affordable. Therefore, countries should aim for net zero emissions by 2050. This would give these countries a chance of meeting their Paris Climate Agreement goals, says the UN.

Does Australia have a net zero emissions target?

Australia’s greenhouse gas emissions policy is not set in stone. Instead, Prime Minister Morrison aims to get to net zero emissions “as soon as possible”. But his “preference” is by 2050. In contrast, other countries have set hard timelines to reach net zero.

Furthermore, in 2021, PM Morrison said that it is not a question of when Australia reaches net zero emissions but how. On the other hand, scientists believe that the speed of emissions reduction is crucial to countries’ compliance with the Paris Agreement. In any case, this raises the question of how the Australian government intends to cut greenhouse gas emissions.

Australia is on the “pathway to net zero”, stated the Australian PM in 2021. Technology will lead the country to this goal, according to Morrison. However, Australia does not have a national policy to increase renewable energy. In fact, it is one of only four of the world’s 20 biggest economies without one. Furthermore, the government is also against taxes to reduce emissions. Again, this makes Australia an outlier. Namely, most of the richest countries have or plan to have a carbon price scheme. That is, except Australia and India. On top of this, Australia’s plan to reach net zero emissions includes continued support for fossil fuel industries.

Bafflingly, Australia has increased financial support of fossil fuels since signing the Paris Agreement. Specifically, this support rose 48 per cent between 2015 and 2019. Moreover, this was the highest increase of any of the world’s biggest economies. This is set to continue. That is because Australia has no plans for a “green recovery” from the COVID-19 pandemic. Instead, the Morrison government has promised funds for a “gas-led recovery”.

A gas-led recovery is incompatible with the Paris Agreement

The Australian government has given money to several new natural gas projects. This includes developing five new areas where miners will extract gas. But this would lead to a big increase in greenhouse gas emissions. In fact, the development of just one of these areas would do so. Namely, the Beetaloo Basin would create the equivalent of about 25 per cent of Australia’s current total yearly emissions. That is according to the government’s own estimates. 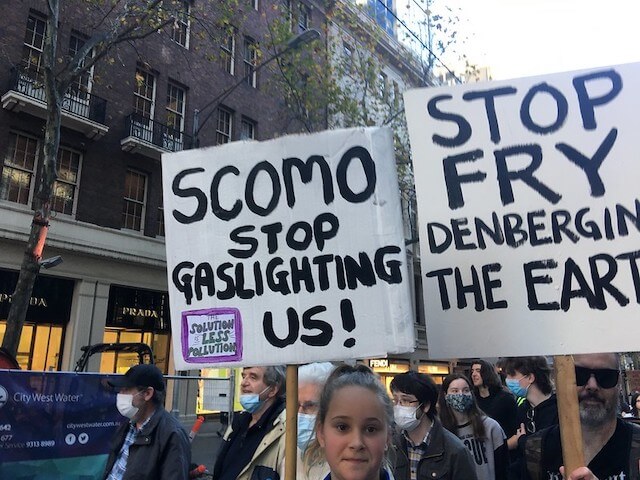 Renewable energy is key to adhering to the Paris Agreement

Australia should aim to produce 100 per cent renewable electricity. That is the view of the Climate Council. Firstly, that is because renewables are cleaner than gas, says the organisation. Therefore, this would help to keep global warming below 2°C. Secondly, these clean energies are now cheaper than natural gas. This led Australia to generate a record amount of renewable electricity in the first half of 2021. Over the same period, the amount of gas-generated electricity fell. “Gas simply cannot compete with renewable energy”, said Dr Madeline Taylor, a Climate Council spokesperson and energy expert.

Australia can no longer rely on fossil fuels. Quite simply, they prevent the country from adhering to the Paris Agreement. Fortunately, renewable energy technologies offer a ready replacement. They would allow Australia to help keep global greenhouse gas emissions under control. Only then can the country’s actions truly fit within the United Nations Framework Convention on Climate Change.