Fracking: Pros and Cons in Australia

We need to take a look at the pros and cons of fracking. Why? Because fracking in Australia could increase. Government advisors want fewer fracking restrictions. In turn, the federal government has pushed a “gas-led recovery” from the COVID-19 recession.1

What is hydraulic fracturing?

We call some sources of natural gas “unconventional”. This is because they are more difficult for miners to extract. They require additional technology or effort compared to “conventional gas”.4 Miners sometimes cannot get this gas to flow freely from underground. This is when they use fracking to increase the rate of flow.5

For shale gas and tight gas, miners usually need fracking to enable gas production. They also sometimes require fracking for coal seam gas (CSG). To date, CSG has been the most common unconventional gas source in Australia. There are also many shale and tight gas sources in all states and territories except the ACT.6 In fact, only unconventional gas sources remain in most Australian states.7 Therefore, if the gas industry uses fracking, more gas can be mined in Australia.

Is fracking in line with Australia’s Paris Agreement targets?

However, the growth of Australia’s gas industry is not compatible with the Paris Agreement. To keep global warming under 1.5°C, gas production must fall three per cent every year.8

Any increase or reliance on fossil fuels and the fracking industry to maintain energy resources, irrespective of the natural gas reserves and energy demand, are contrary to the goals set out in the Paris Agreement. As a result, this may have a significant effect on climate change and human health.

Natural gas is bad for the climate

Up to 98 per cent of natural gas is methane.9 CSG is almost pure methane.10 Methane traps 84 times as much heat in the atmosphere as carbon dioxide over 20 years.11 Unfortunately, this greenhouse gas leaks all along the gas production supply chain.12

If these leaks are below one to two per cent of the gas, then natural gas has lower greenhouse gas emissions than coal.13 But the global gas industry has underestimated its methane emissions by at least 25-40 per cent since 2012. Therefore, natural gas may be worse for the climate than coal.14 Fracking developments in the Northern Territory threaten Australia’s greenhouse gas emissions reduction targets. They would increase emissions by between seven and 22 per cent.15

“Coal seam gas water pond in the Pilliga” by kateausburn is licensed under CC BY 2.0

Fracking threatens the health of communities and the environment

The fracking process is a high-pressure injection of fluid and sand into underground rock. This re-opens fractures in the rock and allows gas to flow. This needs a lot of fresh water. Unlike conventional gas sources, CSG developments are often close to farms and regional towns.16 Many of these communities are against fracking. They say the fracking process is a risk to their health and the environment.17 Fracking can also have social and economic impacts on rural communities. That is according to Australia’s science agency, the CSIRO.18

There are numerous risks linked to CSG gas fields, according to Lock the Gate Alliance. For example, fracking can contaminate and deplete water sources. It can also spoil good farmland and animal habitats. The community group also raises the potential health impacts on workers and residents.19 Such risks have been confirmed by US studies. Fracking sites cause air pollution. They also potentially contaminate local water supplies.20

Fracking is tied to unconventional gas extraction.21 These sources are expensive to extract and produce.22 The fossil fuel industry says natural gas is a transition fuel. But any new gas project would be expensive for the industry. Therefore, it would need to sell this dirty fuel for a long time. This way, they can make their money back. Therefore, the gas industry would want to slow down the transition to renewable energy.23 This would be a tragedy. New renewable energy is already cost-competitive with new gas. It will be expensive for Australia to transition from coal to gas. It would be cheaper to transition straight to renewables.24

The above factors show that the cons of fracking far outweigh the pros. 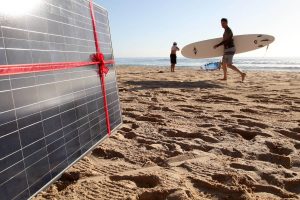 The price of renewable technologies, such as solar and wind power, has fallen since 2010. The cost of batteries to store this power has also dropped dramatically. Wind and solar are now the cheapest forms of electricity.25 In contrast, most Australian states do not have any cheap gas sources left.26 Australia is the sunniest and windiest inhabited continent on the planet. Therefore, we have the resources to transition to 100 per cent renewable electricity.27

The transition has already begun. Australia’s largest electricity grid sourced three times more power from renewables than natural gas in 2020.28 Rather than gas projects, the government should invest in renewable technologies. This could allow renewables to replace gas in industrial processes as well.29

The decline of gas use in Australia

Australia’s use of gas has fallen 21 per cent since 2014. Gas simply cannot supply electricity as cheaply as renewable energies.30 For this reason, the amount of Australia’s natural gas-fired power fell to a 16-year low in April 2021.31 Gas consumption in the grid could all but disappear by 2038.32 Australia already has enough gas supply until then.33 Consequently, there is no need to frack for more gas.

This observation of the pros and cons of fracking clearly indicates that it is best to put an end to the practice. Fracking operations are a risk to communities and the environment. They also jeopardise Australia’s transition to renewable energy. This is not only a bad economic outcome. It would also create a hotter, more hostile climate for our children.