Fracking in Australia Map: A Visual Breakdown of Hydraulic Fracturing

France, Bulgaria, Germany, Switzerland and many other parts of the world have banned hydraulic fracturing (fracking). However, as the following fracking in Australia map reveals, the Oceania country still permits this mining technique in several states. This is perhaps unsurprising given the government’s commitment to a ‘gas-led’ economic recovery.

In what states and territories is fracking active?

There is no official federal stance on hydraulic fracturing. But, Prime Minister Scott Morrison undoubtedly supports the practice. In 2017, whilst Federal Treasurer, Morrison was accused of bullying states into accepting fracking. It was alleged that he threatened to cut the GST distribution of any states who opposed it.

Each state and territory of Australia has its own rules and regulations regarding hydraulic fracturing. This is clearly shown in the map below. For example, the state of Victoria banned it entirely in 2017. Others, such as Tasmania and South Australia have moratoriums that temporarily outlaw unconventional gas exploration and development.

On the other hand, the Northern Territory and Queensland have no restrictions on the practice. Queensland is where the commercial production of coal seam gas began in 1996. It remains the source of most of Australia’s unconventional gas. This situation appears unlikely to change. Australia’s largest gas producer, Australia Pacific LNG, wants government approval to frack almost 1,000 additional wells in Queensland. 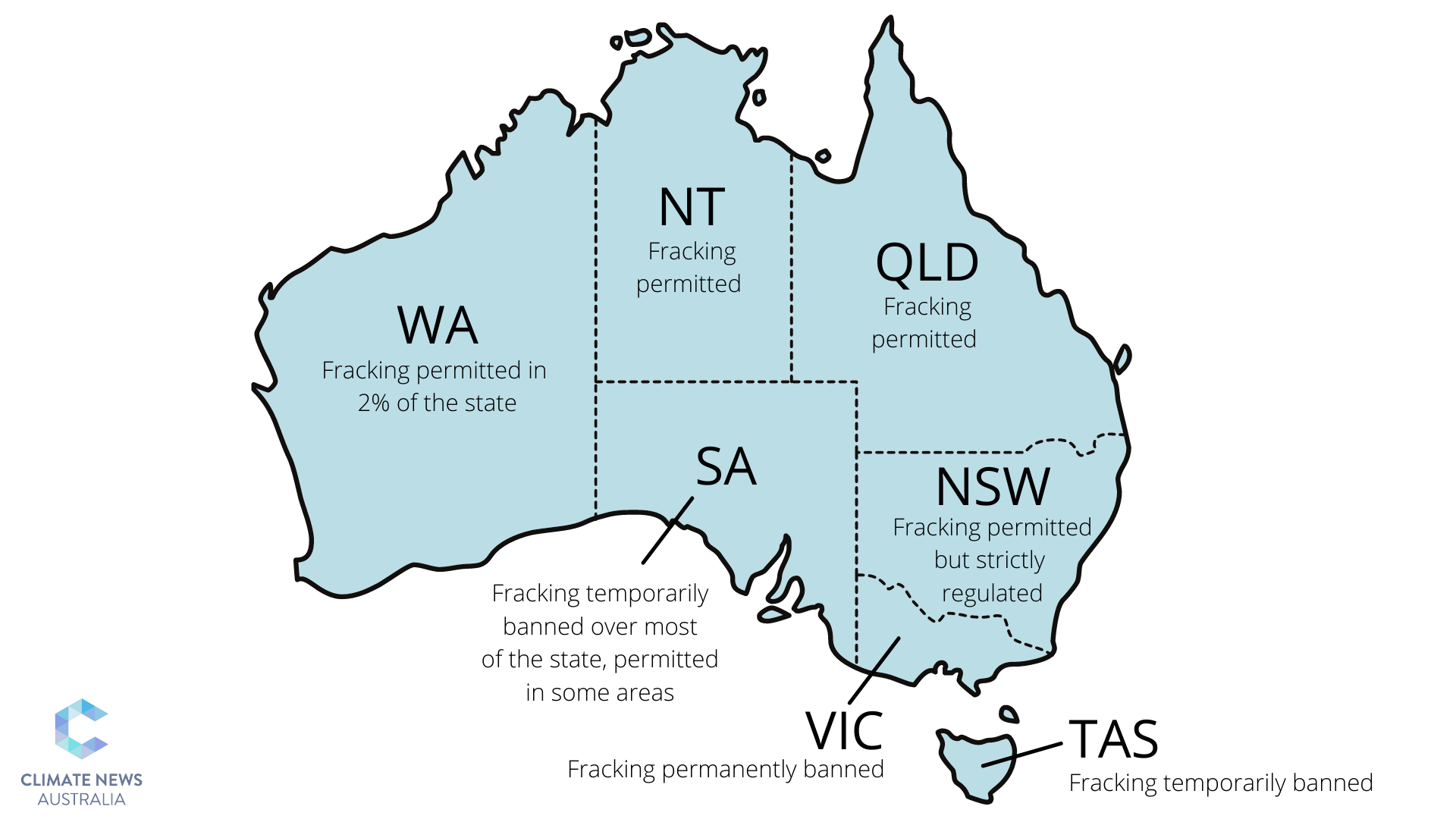 Australia’s Northern Territory temporarily banned fracking in September 2016 due to concerns around its environmental harm. However, the moratorium was lifted in April 2018. The state believes that the environmental, social and economic risks of the extraction process are manageable.

The decision has reopened shale gas reserves in the Beetaloo and McArthur basins for development. Major gas companies, such as Origin Energy Ltd, aim to begin fracking as soon as possible. But this is not what the majority of the Northern Territory’s residents want. The inquiry that led to the reopening of fracking in the state also identified clear and widespread opposition to the practice.

The Western Australia government introduced a moratorium on hydraulic fracturing in 2017. Nevertheless, following the Northern Territory’s decision to open the state up to fracking again, the Western Australia government lifted their own moratorium in November 2018. This was despite heavy opposition from large swathes of the population, including farmers and environmentalists.

However, fracking remains prohibited in 98 per cent of Western Australia. The ban is only lifted on existing petroleum exploration and production titles. Landowners will have the right to stop fracking on their land.

Unlike Western Australia and the Northern Territory, Queensland has never banned fracking. The Bowen and Surat basins are the main producers of CSG in Queensland and Australia. Three major projects in the state convert coal stream gas into liquefied natural gas (LNG) for exportation.

The Cooper basin is one area in Queensland under investigation by several federal government agencies and departments for further fracking possibilities. But this area has eight areas of wetland of national importance and 26 threatened species. Fracking poses a serious threat to this wildlife.

The energy industry in Australia has used 116 different chemicals in their relentless exploitation of unconventional gas. 33 of these chemicals are of ‘potential high concern’, and 41 are of ‘potential concern’, according to a government report on the Cooper basin. There is a risk that pollution from fracking sites can contaminate drinking water. Moreover, it creates dangerous levels of air pollution.

Coal seam gas, typically extracted by fracking, is between 95 and 97 per cent methane. Methane is a greenhouse gas like carbon dioxide (CO2). It does last in the atmosphere for less time than CO2. But, it is 80 times more potent at trapping heat over the first 20 years than CO2. Over a century, it is 28 times more powerful at warming the Earth than CO2.

Studies of gas wells show that about four per cent of the methane they produce escapes into the atmosphere. Large increases in methane entering the atmosphere in recent decades are predominantly thanks to fracking activities. This could be disastrous for climate commitments that aim to limit global warming. Methane is far more dangerous over the short term than CO2, and any emissions of this greenhouse gas heighten the risk of a climate catastrophe.