“Enough is enough”: The Legal Battle to Save Tiwi Sea Country From Barossa Gas Project

Home » “Enough is enough”: The Legal Battle to Save Tiwi Sea Country From Barossa Gas Project

The energy regulator has allowed the oil and gas giant to drill up to eight wells in Tiwi sea Country. This is despite ongoing opposition from Tiwi people and a previous legal challenge from Mr Tipakalippa to prevent any drilling from commencing until after his hearing.

On 22nd August, the Federal Court travelled to Pitjamirra on Melville Island to take on-Country evidence. Tiwi people gave evidence on the very coastline closest to the drilling site and in accordance with cultural protocol, including in the form of song and dance. This is Australia’s first case of First Nations peoples challenging an offshore project approval over lack of consultation. It is also the first time a judicial hearing includes on-Country evidence to challenge the approval for an offshore fossil fuel project. 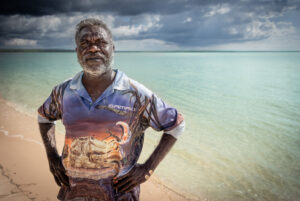 Islanders fight for a voice over Barossa gas

Tiwi Elder Dennis Tipakalippa and his community, the Munupi, have been fighting long and hard for a voice in relation to the Barossa gas approval. “Santos should have respected us and consulted in the proper way. They think they can just go ahead with drilling our sea Country without even talking to us. It feels like a big backstab. Enough is enough”, said Mr Tipakalippa. “We spend a lot of time out in the water – hunting, fishing. We only ever take what we can eat in a day, no more.”

Energy campaigner at the Environment Centre NT, Jason Fowler, says: “The case being brought by Tiwi Traditional Owner Dennis ‘Murphy’ Tipakalippa is of immense historical, cultural, and environmental significance. The on-Country hearing will provide a way for Mr Tipakalippa and other Munupi witnesses to communicate the cultural and spiritual impacts that will be caused by Santos’ fossil fuel project if it continues.”

Following the hearing at Pitjamirra, the Federal Court relocated to Darwin for the remainder of the proceedings until the 26th of August. Mr Tipakalippa has representation from the Environmental Defenders Office (EDO). Alina Leikin, Special Counsel for the EDO, said: “Mr Tipakalippa will argue that Santos failed to provide him, and his community, with the opportunity to have a say about this drilling, despite the stakes for their culture and way of life.”

A demonstration also took place outside Darwin Supreme Court on 24th August, where Tiwi Elders, members of the Darwin community, and Federal and local MPs gathered in solidarity.

Following the hearings, Santos agreed that it will not drill any new wells and cease drilling its current well for the three weeks duration of the court case.

What is Santos’ Barossa Gas Project?

Santos’ Barossa gas field is located in the pristine waters in the Northern Territory, north of the Tiwi Islands. The AUD $4.7 billion project will involve the construction of nearly 260 kilometres of pipeline, connecting offshore gas facilities to an existing pipeline which runs to Darwin.

This pipeline poses a grave risk to marine life, according to the campaign group Stop Barossa Gas. It would run through a protected marine park and along the length of Bathurst Island, one of the Tiwi Islands. The construction of this pipeline threatens turtle hatchlings and nesting beaches. It also involves extensive seabed disturbance, increased shipping and helicopter movements over the islands, and significant noise and light pollution, argues the group.

The project would also release 15.6 million tons of carbon dioxide emissions every year, leading to Barossa being named a “carbon bomb” by the Australasian Centre for Corporate Responsibility​ (ACCR), due to its significant harm to the climate. Furthermore, a report from the Institute for Energy Economics and Financial Analysis found that the extremely high carbon dioxide content of Barossa gas means that the project would be vastly more emission-intensive than any other. The project “looks more like a CO2 emissions factory with an LNG by-product”, said report author and industry expert John Robert.

This is not the first legal challenge against Santos’ Barossa gas project. Tiwi Islanders had previously filed an injunction in March aiming to stop South Korean credit agencies from funding the project with AUD $964 million. This claim was also filed citing a lack of consultation with Traditional Owners, as well as highlighting the detrimental impacts on Tiwi Islanders’ way of life and impact on marine life and the climate. 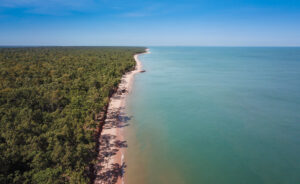