Lawyers worldwide have issued a stark warning that governments must ramp up their climate action or face accountability in courts.

Their open letter, published on 27 September, comes as the UN climate chief Simon Steill warns that countries’ plans are “nowhere near” strong enough to avoid the worst climate impacts. ​​It also arrives just days after the deadline for countries to submit their new national climate plans ahead of the UN’s COP27 climate summit in November. Just 23 of almost 200 nations met the deadline with new or improved climate plans. According to Climate Action Tracker, current policies from governments would result in a devastating 2.7°C warming above pre-industrial levels.

A warning to leaders

The letter is part of the ‘Climate Trials’ campaign, which highlights the wave of climate litigation cases against governments that have failed on climate action and endangered people’s fundamental rights. It is the first time in history that lawyers and NGOs around the world have joined forces to warn governments that they must deliver stronger targets and actions – as demanded by science – or face further legal action.

“Climate action is a legal duty. Yet governments are failing to comply with their own laws and commitments”, said Sarah Mead, Co-Director of the Climate Litigation Network. “We want to make sure that countries understand that the law is on our side. Lawyers and activists are using this advantage to hold governments accountable for their missed climate targets.”

Due to many decades of delay, the world is already close to breaching a 1.5°C global temperature rise. Every fraction of warming matters, but governments are failing to take action to avoid the worst impacts of climate change. “People are losing hope and trust”, said Filippo Sotgiu, a plaintiff in the Italian climate case. “We can’t keep relying on governments’ goodwill to safeguard our rights and to protect our future. That’s why activists around the world are turning to the law to make sure our suffering and human rights violations are minimised. If we look at recent cases, we can say: this tactic is working.”

The letter calls on governments to use COP27 as the opportunity to take urgent action and meet legal obligations to safeguard human lives. “We – lawyers and activists from across the globe – are standing with frontline communities to challenge your inadequate climate action”, the letter states.

“We are on the precipice of the most serious intergenerational violation of human rights in history… COP27 is an opportunity for you to change course: to minimise the extent of suffering and human rights violations caused by your failure to address the crisis, and to live up to your legal obligations under domestic and international law.”

“Governments of the world: your delay is costing lives… If you continue to fail us, we will continue to turn to the courts to demand accountability”, the letter concludes. 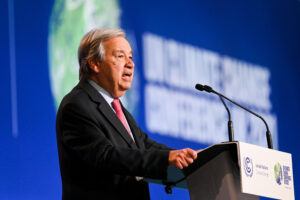 The UN Secretary-General, António Guterres, has been consistently stark in his warning to governments on their failure to take urgent climate action. “The fossil fuel industry is killing us”, Mr Gutteres said at September’s UN General Assembly in New York, “and leaders are out of step with their people, who are crying out for urgent climate action.”

Countries trapped on the front line of climate change cannot bear the burden of further delay. Addressing the UN assembly, President Nikenike Vurobaravu of Vanuatu made history as the first national leader to call for a Fossil Fuel Non-Proliferation Treaty. “We are measuring climate change not in degrees of celsius or tons of carbon, but in human lives”, President Vurobaravu said. “Our youth are terrified of the future world we are handing to them.”

The Pacific nation of Vanuatu ​​is already a carbon-negative country, but the islands are at great risk from climate-induced disasters. Vanuatu has also asked the International Court of Justice to issue an opinion on the right to protection from the adverse consequences of climate change.

The power of the law for driving climate action

The law is a powerful tool for forcing climate action from laggard governments. Since the landmark Dutch climate case, brought in 2015, over 80 cases have been filed to challenge governments’ responses to the climate crisis. Almost half of these are from 2021 alone.

There are litigation suits against the governments of all major emitters, and Australia is no exception. “Australia has become a hotbed of climate litigation”, writes law correspondent Christopher Niesche, second only to the US in the number of lawsuits filed. The Grantham Research Institute on Climate Change and the Environment holds a database of 127 climate litigation cases for Australia. Cases against the government include Pabai Pabai and Guy Paul Kabai v. Commonwealth of Australia, Sharma and others v Minister for the Environment and O’Donnell v. Commonwealth. Analysis by Paris Equity Check previously singled out Australia for putting its citizens in danger by ignoring climate change.

Around the world, lawsuits against governments have been successful in reducing real-world emissions. Moreover, because the ruling of one lawsuit can influence others, momentum can build and set precedents for other cases – making each outcome even more powerful.

“The world is witnessing an avalanche of climate lawsuits that is unstoppable”, said Javier Dávalos González, Climate Program Coordinator, Asociación Interamericana para la Defensa del Ambiente (AIDA). “Our cases are inherently intertwined. Courts are relying on landmark rulings from other countries so with every win we are building stronger ground for future hearings and new legal challenges targeting governments’ inaction.”