Home » Breakthrough for Climate Justice as Loss and Damage Fund Finally Agreed (Video)
2022 was the first year loss and damage was included in discussions on a COP. Find out more in this video explains more.

In a victory for climate justice, COP27 closed with a deal for a loss and damage fund, which developing nations have been calling on for decades. The fund will compensate those countries hit hardest by climate disasters. These countries have limited resources to rebuild and have contributed little to the crisis. “This COP has taken an important step towards justice”, said UN Secretary-General António Guterres in response to the news.

A ‘new dawn’ for climate justice

Negotiations faltered early in COP27 talks, which cast doubt over the prospect of a successful deal. Greenpeace International accused developed nations of using “delay tactics” to stall an agreement. Panamanian negotiator Juan Carlos Monterrey described the lack of progress as “outrageous“, as delegates wrangled for hours over terminology. “Very poor people are losing everything. We don’t demand charity, we demand justice”, he said. Halfway through the summit, Australia’s Minister for Climate Change, Chris Bowen, declared that coming to an agreement on loss and damage this year was “unlikely”.

Therefore, the 11th-hour loss and damage deal was a dramatic turnaround of events. COP27 negotiations had “not been easy”, said UNFCC Executive Secretary Simon Stiell. “But this historic outcome does move us forward and it benefits the vulnerable people worldwide.” Mr Steill credited civil society for mobilising the international community in this breakthrough deal for climate justice. “Without the voices of individuals, whether they are activists, scientists, researchers, youth or Indigenous peoples we would not have gotten this far”, he said in his closing remarks. Yeb Saño, Executive Director at Greenpeace Southeast Asia, heralded the agreement as a “new dawn for climate justice”. 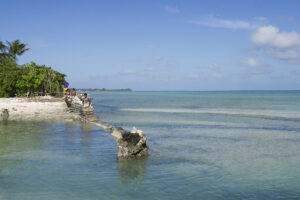 What loss and damage means for Australia and the Pacific

The loss and damage fund is significant for Australia and its climate-vulnerable Pacific island neighbours, particularly as the nations plan to collaboratively host COP31 in 2026. Five of the 15 countries most at risk from weather-related events are in the Pacific, highlights the Guardian. In contrast, Australia is a high-emitting and wealthy nation. Therefore, it plays a key role in providing loss and damage support that climate-vulnerable countries desperately need.

For example, when Cyclone Winston hit Fiji in 2016, it caused USD $1.4 billion in damage and left 347,000 Fijians needing urgent assistance. However, Fiji received less than five per cent of this loss and damage in funding, sourcing the remainder through international loans. Fiji has suffered through six more cyclones in the years since, and it is now relocating entire communities to safer ground as the impacts of climate breakdown intensify.

However, committing to a loss and damage fund is only the first step. Australia and other wealthy nations must also deliver. “Finally achieving agreement on a [loss and damage] fund is a major milestone. Now comes the difficult part – the fund must be set up, and filled with cash”, writes environment correspondent Fiona Harvey. “There is no agreement yet on how the finance should be provided and where it should come from.” However, some nations’ track record of delivering promised climate funds is poor. More than a decade ago, Australia and other wealthy countries promised USD $100 billion per year in climate finance, but every year the delivery has fallen short. A 2022 report revealed Australia is funding just one-tenth of its fair share of this fund.

Shiva Gounden from Greenpeace Australia Pacific welcomed Australia’s support of loss and damage, but she said that the country must move beyond words and towards action. “Moving forward into discussion of the details of the fund, we need to ensure that those most responsible for the climate crisis make the biggest contribution. For countries like Australia that spent a staggering [AUD] $11.6 billion on fossil fuel subsidies in 2021-2022, this means paying up, not paying off polluting industries”, Mr Gounden said. Indeed, redirecting the vast global financial flows away from fossil fuel subsidies and towards a loss and damage fund would be a powerful solution for the world to adopt. As would imposing a windfall tax on excessive fossil fuel profits.

Fijian climate activist and representative of the Pacific Youth Council, Ulaiasi Tuikoro, also said that the deal offered the Pacific Islands a glimmer of hope, but the fight for climate justice is long from over. “It was devastating for us Pacific Islanders to go into rooms and negotiate. We don’t negotiate numbers and clauses, we negotiate our lives, cultures, communities, people, and our very existence”, he said. “The commitment to a loss and damage finance facility at COP27 is a result of solidarity and a step forward for climate justice, but in order to give the Pacific a fighting chance we must tackle the causes and the consequences of the climate crisis simultaneously. The world must move on agreeing to phase out all fossil fuels and throw every effort behind preserving our 1.5°C lifeline.”