Australia’s East Coast Koala’s: Why Are They Endangered? (Video)

Home » Australia’s East Coast Koala’s: Why Are They Endangered? (Video)
Watch this video to find out why Australia’s koalas are endangered.

Australia’s koala bears are now listed as endangered, Federal Environment Minister Sussan Ley has announced. The decision was announced on 11 February 2022 and followed the advice of Australia’s Threatened Species Scientific Committee. The government had listed the species as vulnerable until now.

Climate change is one of the key drivers of this decision. “The impact of prolonged drought, followed by the black summer bushfires, and the cumulative impacts of disease, urbanisation and habitat loss over the past twenty years have led to the advice”, said Ley.

Ley has stated that the federal government is working with the governments of Queensland, New South Wales and the Australian Capital Territory to develop a recovery plan for the species. She has said that the government will invest a record AUD $50 million over the next four years towards the long-term protection and recovery efforts for Australia’s koalas. 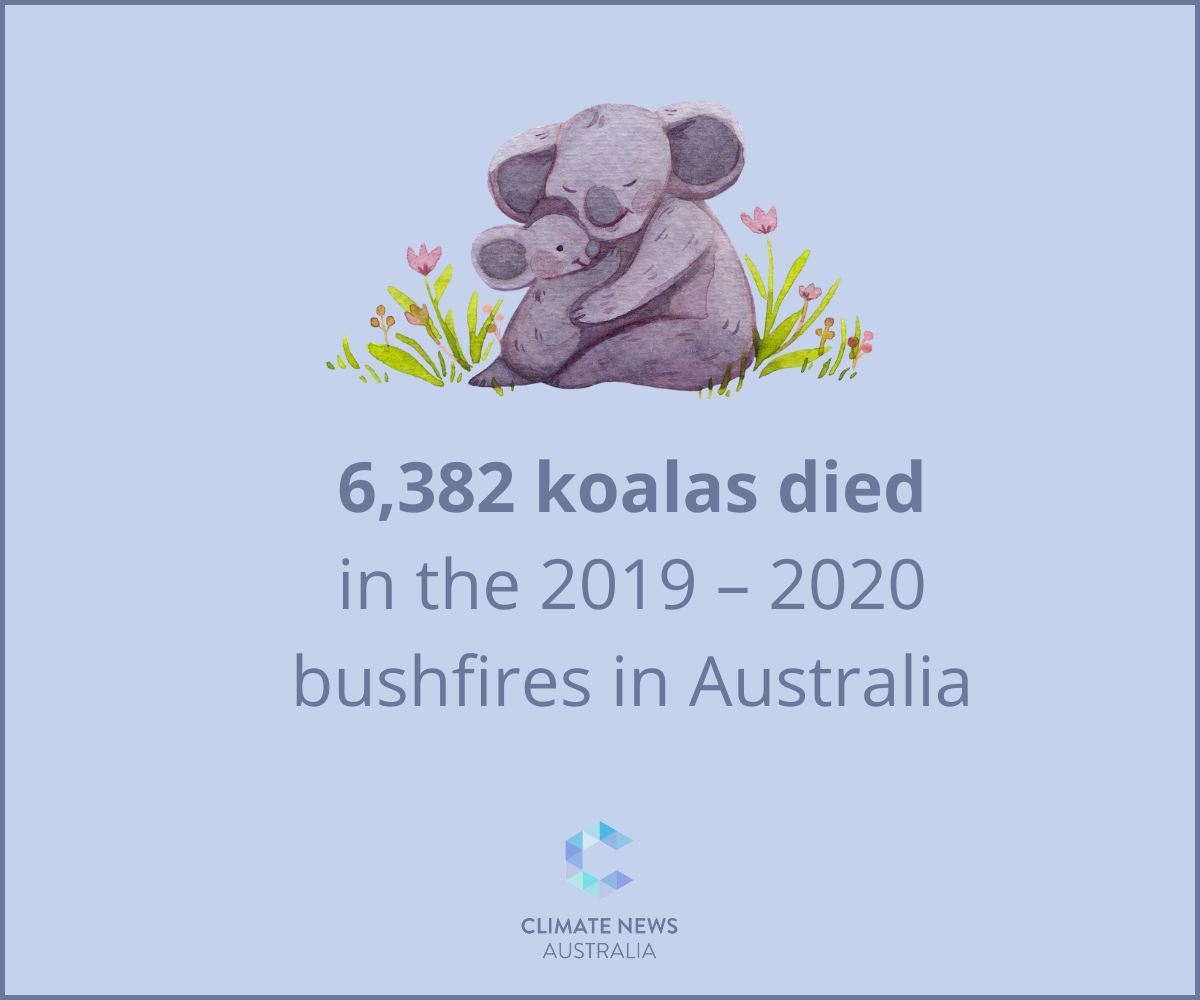 Climate change is the reason why koalas are endangered

The committee advised that koalas are likely to come under increasing pressure from stressors caused by climate change, according to scientific modelling. This includes changes in summer temperatures. Humidity and water scarcity also pose a significant threat to koalas, the committee indicated. Heatwaves also cause koalas significant physiological stress, adding to the reasons why koalas are endangered.

A large area of koala habitat stands to be lost under 2070 climate change projections, the committee has said. Koalas rely strongly on annual rainfall and need to be close to water. As the heat threatens their habitats, koalas may take refuge from the predicted heat in gullies, cliffs, caves or places where dense vegetation may shield them.

The committee classified the increased frequency of droughts, heatwaves and bushfires as “major” risks to the population and a key reason why koalas are endangered. This means that these events would result in a decline in population numbers. Habitat loss due to climate change is considered “catastrophic” by the committee. It raises the possibility of extinction. However, it is “almost certain” that koalas will face these risks, the committee has stated. 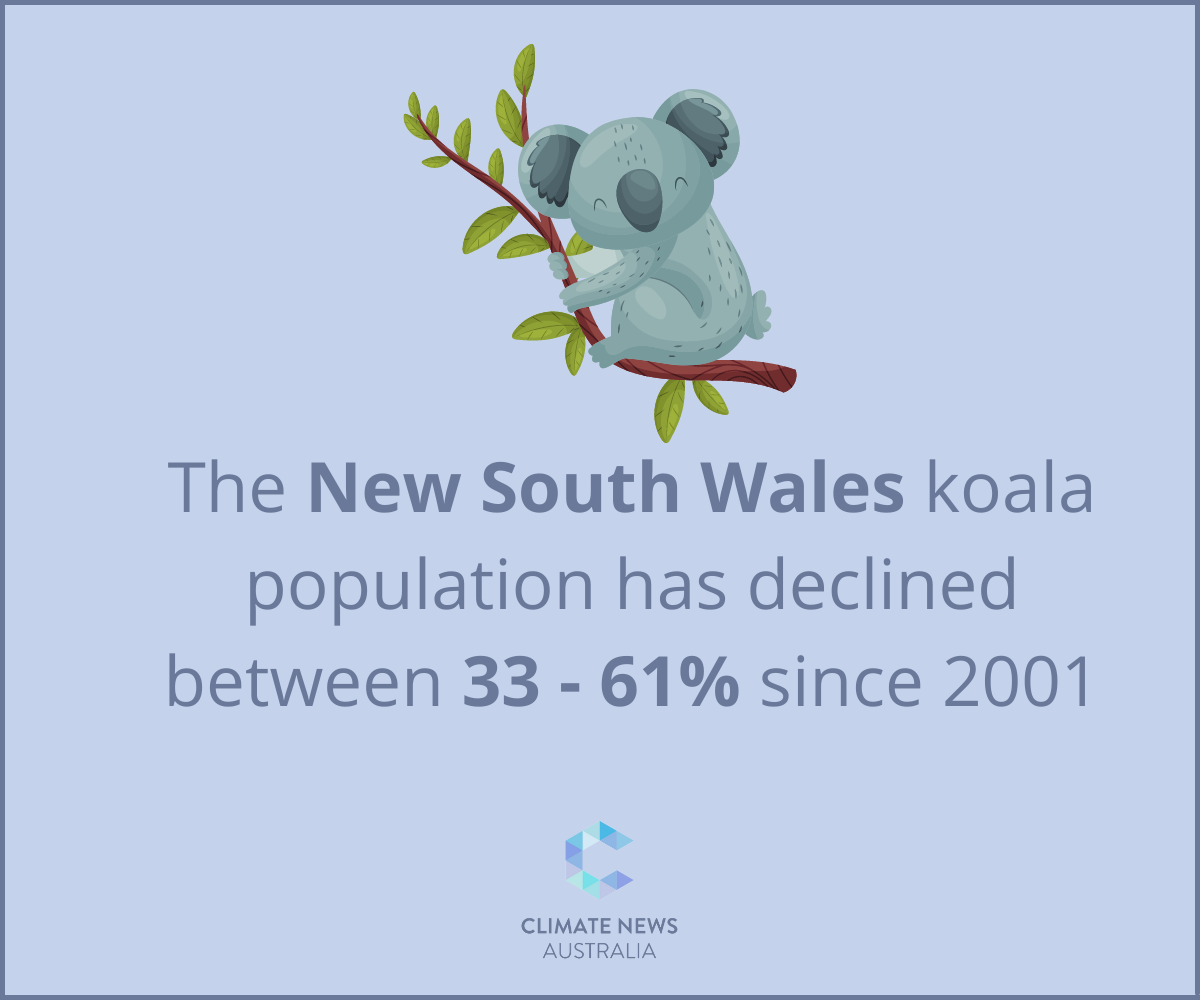 In April 2020, conservation and animal welfare groups called for the koala to be listed as endangered. This followed the devastating bushfires of that summer. The groups said there had been “severe population declines”. The bushfires made this situation worse.

The World Wide Fund for Nature-Australia, the International Fund for Animal Welfare and Humane Society International jointly made the appeal. They stated that koala populations in Queensland have declined by 50 per cent since 2001. The primary reason for this rapid decline in koala populations is deforestation, drought and the 2021 summer bushfires. The groups said this in a report presented to the Australian federal government.

The report also found that the forest fires in Queensland killed at least 672 koalas between August and December 2019. Koalas “appear to be functionally extinct” in central Queensland’s Mitchell Grass Downs bioregion, the groups said. In the Mulga Lands, there had been an 80 per cent decline in koala populations. Environmentalists think that the second-highest proportion of koalas in Queensland live there. 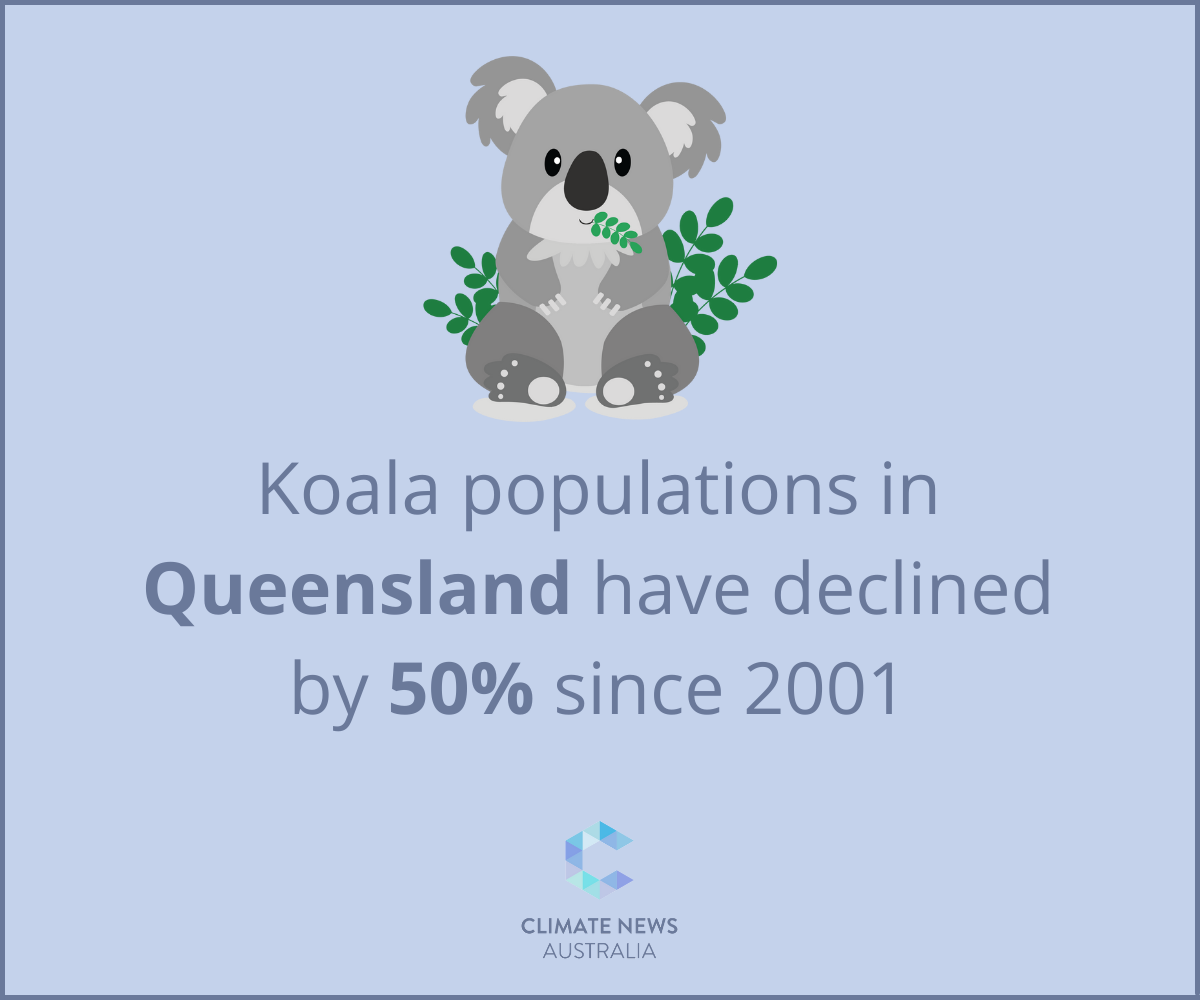 Thousands of koalas killed in bushfires

The 2019-2020 wildfire effects on humans were devastating, with about 80 per cent of Australians being exposed to toxic air pollution. But, koalas also suffered immensely from these fires. In a separate report, the same environmental and conservation groups said that the New South Wales koala population had declined between 33 per cent and 61 per cent since 2001. A “conservative” estimate was that 6,382 koalas died in the 2019-2020 bushfires.

Koalas have “suffered relentless ongoing pressure” since being listed as a vulnerable group in 2012. For example, land clearing has increased 13 fold in New South Wales since the government relaxed vegetation laws in 2016.

“Climate change has supercharged droughts and heat waves, increasing koala deaths as their feed trees die-off and waterways where koalas drink die out”, the report said. The groups added that koalas were already on the path to extinction before the 2019-2020 bushfires. They said that listing the species as endangered would increase protection for their habitats, like forests and woodlands. It would also mobilise funds and public support for the animals. It would also enable politicians to use the law to prevent the logging and bulldozing of trees.

IFAW Wildlife Campaigner Josey Sharrad said at the time, “koalas were already living on a knife edge and these fires have left them fighting for their very survival. They need a helping hand and some breathing space to recover. We owe them that at least.” 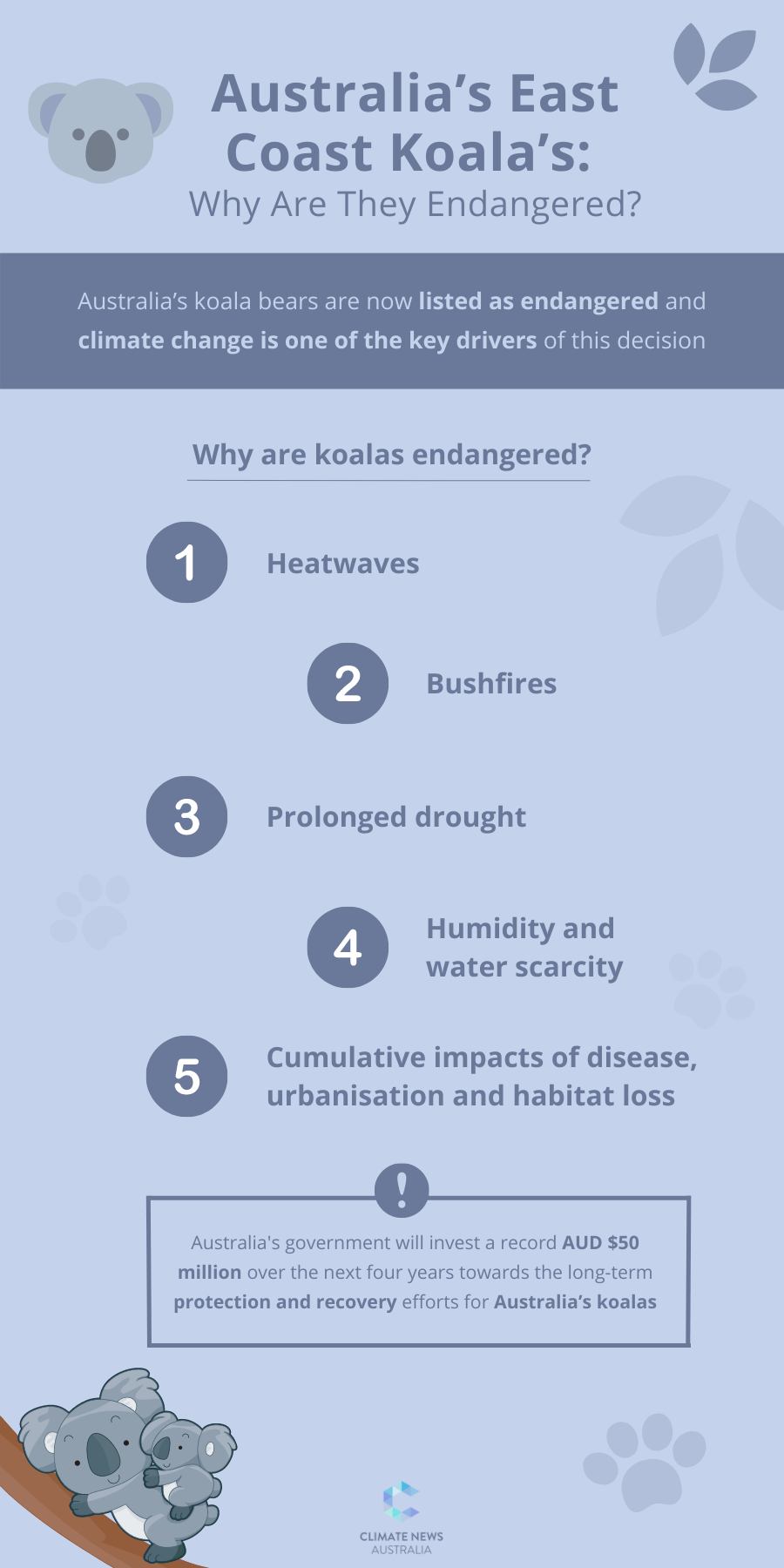