Australian Political Parties: How Much Warming Would Their Climate Policies Lead To?

Home » Australian Political Parties: How Much Warming Would Their Climate Policies Lead To?

Australian political parties and their climate policies have come under much scrutiny ahead of the election. The Intergovernmental Panel on Climate Change (IPCC) reports have reinforced the urgency of limiting global warming to 1.5 ̊C. This target to secure a liveable world remains achievable but only with immediate and dramatic emissions reduction by 2030. The public understands the importance of this moment, as research finds that climate is a key issue for Australians this election. But, do the political parties’ climate plans sufficiently address this urgent crisis?

Climate Analytics has analysed the warming outcome of each party’s 2030 plans, and the results are stark. Only the Greens and Teal Independents have plans consistent with 1.5 ̊C of warming. The Labour Party’s (ALP) target would bring 2 ̊C. The Liberal-National Coalition (LNP) plans would cause a dangerous 3 ̊C of warming, bordering on 4 ̊C. This is a devastating level of warming that is no different from a “business-as-usual” outcome.

“Already, Australians are feeling the heat of a world that has warmed by just over one degree, and it’s not pretty. That the LNP appears committed to risk global warming of 3°C or more is beyond irresponsible”, said Climate Analytics CEO Bill Hare. “The magnitude of emission reductions by 2030 are critical to the feasibility of the world reaching net zero by 2050 or earlier. If governments come up with insufficient reductions like those of Australia, then net zero may well be impossible.”

Six months on from COP26, conference president Alok Sharma has warned that failures to action Paris Agreement targets are “an act of monstrous self-harm”. Indeed, Australia has a direct national interest in reducing emissions. The country is highly vulnerable to the effects of climate change. It has also experienced an above-average temperature increase of 1.4°C since 1900, with nine out of the ten warmest years on record occurring since 2005.

This amount of warming is already causing Australia to suffer extreme heat, drought, unprecedented wildfires and catastrophic flooding. These conditions are threatening Australian agriculture and food security. The Great Barrier Reef is repeatedly being damaged by widespread coral reef bleaching. The risk of coastal flooding is ever-increasing, risking as many as 250,000 Australian properties by 2100. This non-extensive list of climate risks will worsen with every increment of global warming.

“Australia has a strong self interest in the world taking sufficient action to limit warming to 1.5 degrees Celsius”, said Hare. “Exceeding this level would doom the Great Barrier and Ningaloo Reefs to extinction, lead to very substantial reductions in wheat yields, increasingly catastrophic heat and flooding events, as well as posing a major risk to human health and infrastructure.”

The next few years are critical. Emissions must halve by 2030 to give a chance of meeting 1.5°C. This means the world needs ambitious climate leaders in power now. “Every fraction of a degree of avoided warming matters, and will be measured in lives, species and ecosystems lost or saved”, writes the Climate Council.

Only Greens and Teal Independents have 1.5˚C compatible commitments

Of the Australian political parties analysed, the Greens have the most ambitious climate policies. Plans for a 74 per cent emissions cut by 2030 are well within a 1.5°C compatible pathway range. The Teal Independentents commonly support Zali Steggall’s climate change bill that calls for a 60 per cent reduction in emissions by 2030. This is also consistent with 1.5 ̊C of warming but is at the upper end of the emission pathway.

While no amount of warming is safe, limiting global warming to 1.5°C would allow some regions of the Great Barrier Reef and other tropical reefs, such as Ningaloo, around Australia to survive. The increase in the frequency of the most extreme heat events that occurred once in a decade in recent times could be limited to about every five years. There would be around a 1°C maximum temperature increase above those in recent times.

For Pacific Islands, not exceeding 1.5˚C is critical for the survival of entire nations. “By keeping temperatures below 1.5˚C, climate-related risks to health, livelihoods, food security, water supply, human security, and economic growth will be reduced. There will be a future for at least some of the coral reefs so intrinsic to our Pacific identities and economies. Atoll communities will suffer as sea levels rise, but there will be hope that the ocean will stabilise”, writes Mr Kosi Latu, Director-General of the Pacific Regional Environment Programme (SPREP). “Let us not dwell on 2˚C and above – for Pacific Islanders, it is simply not an option”, he adds. 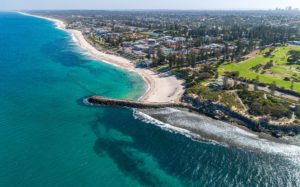 A 2°C warming outcome, however, is aligned with the Labor Party’s target of a 43 per cent emissions cut by 2030. This is not consistent with the Paris Agreement and could result in severe and irreversible impacts. As we now know, it would also be catastrophic for many Pacific Islands. When compared to 1.5°C, warming of 2°C “significantly increases the likelihood of many impacts in Australia related to extreme events: heatwaves, power blackouts, bushfires, floods, water restrictions and reduced crop yields”. Coastlines, beaches and infrastructure, including in populous locations such as Sydney, Melbourne, Adelaide and Perth, would all be at greater risk from rising seas.

This level of sustained warming would likely also destroy the Great Barrier Reef and all other tropical reefs in Australia and elsewhere. This would have cascading impacts, not just for species and ecosystems, but also on Australia’s tourism industry and economy. Globally, the most extreme heat events could be about three times more frequent than in recent decades. This means that an intense heat event that might have occurred once in a decade could occur about every three years. These events would also be significantly hotter and would increase the threat to life.

The Liberal-National Coalition Party target of 26-28 per cent emissions reduction by 2030 is compatible with global warming of at least 3 ̊C, bordering on 4 ̊C. This outcome would bring catastrophic and irreversible damage to Australia. “Under this level of warming we’d see the total destruction of the Great Barrier Reef, and all other tropical reefs such as Ningaloo, also a World Heritage site. Intense heat events that have recently occurred once in a decade could happen almost every year, and highest maximum temperatures are likely to be 3°C warmer than in recent times”, said Hare.

A 3°C warmer world would make many of Australia’s ecosystems “unrecognisable”, says the Australian Academy of Science. The more frequent and intense weather events would have compounding impacts on people’s lives and livelihoods. Many properties and businesses would become uninsurable. Crops would fail and some communities would need to find alternative water sources. Heat and pollution-related health conditions, such as heart and lung disease, mental health issues and suicides, are at risk of increasing. In addition, tropical diseases are more likely to spread across Australia, including major population centres. The capacity to respond to these climate impacts and disasters would also become increasingly compromised as temperatures increase.

The world must do everything possible to avoid exceeding 1.5˚C. Currently, ALP and LNP – the main Australian political parties  – have policies that fall far short of securing a safe world. Australia risks “sleep-walking” towards climate catastrophe, writes Christina Figueres, architect of the Paris Agreement, unless it commits fully to 1.5˚C.

The window of opportunity is closing, but it is not too late for Australia to change course and lead the world in bold and effective climate action. Citizens must demand nothing less from their incoming government — no matter what political party they are from.