The Australian Conservation Foundation (ACF) has filed a legal challenge in the Federal Court against Woodside’s controversial mega-polluting Scarborough gas project. The ACF lawyers argue that the project should not proceed until an impact assessment on the Great Barrier Reef has taken place.

Scarborough is a proposed new gas project off the north-west coast of Western Australia, producing liquefied natural gas (LNG) predominantly for export to Asia. The project would cause an estimated 1.37 billion tonnes of greenhouse gas (GHG) emissions over the next 35 years. This is equivalent to three times Australia’s current annual emissions.

Scarborough is a “climate bomb” about to go off, said the ACF Chief Executive Officer Kelly O’Shanassy. “If it goes ahead, the Scarborough gas mine and its Pluto extension will produce vast quantities of climate-heating gas for the next quarter of a century”, she said.

Woodside argues the Scarborough development will help to reduce global emissions by replacing coal with gas. But, Australia’s science body CSIRO has debunked this claim. Instead, it could prolong coal and delay the shift to renewables.

Furthermore, scientists are clear that any new gas projects directly threaten meeting the Paris Agreement. Instead, “gas must rapidly exit the global power sector to keep the Paris Agreement’s 1.5°C temperature goal in reach.” As Dan Gocher, Director of Climate & Environment at the Australasian Centre for Corporate Responsibility (ACCR) warns: “Woodside has declared war on the climate” by backing “the single largest fossil fuel project in Australia in recent memory.”

If the ACF’s challenge is successful, it could set a precedent that all new fossil fuel projects must be assessed for causal climate damage if they go ahead.

Threat to the Great Barrier Reef

Although the gas extraction would take place off the coast of Western Australia and much of it burned overseas, the Scarborough project would affect the Great Barrier Reef in Queensland by fuelling climate change that is causing repeated coral bleaching events on the reef.

The reef is a precious and irreplaceable natural wonder, providing a habitat for thousands of marine species. However, in May 2022, aerial surveillance of the reef confirmed it was suffering from an unprecedented sixth mass bleaching event. Its successive bleaching demonstrates how it is particularly vulnerable to climate change. Last year, the amount of anthropogenic heat absorbed by the ocean equated to seven Hiroshima atomic bombs detonating every second.

“The frequency of concerning heat stress is happening faster than we ever thought it would”, said Dr Neal Cantin from the Australian Institute of Marine Science, who led the aerial surveillance work. “The fact it’s impacting such a large area of the marine park, during a La Niña year, is a clear sign of climate change-driven ocean warming.” 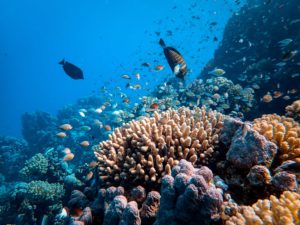 Scarborough has received no approval under Australia’s environment protection law. This is because projects assessed by the National Offshore Petroleum Safety and Environmental Management Authority (NOPSEMA) are exempt from the national environment law. However, that exemption does not apply if an offshore project is likely to significantly impact the World or National Heritage values of the Great Barrier Reef.

The Australian Conservation Foundation believes the GHG emissions from the Scarborough project are likely to have a significant impact on the Great Barrier Reef. Therefore, the ACF argues that the project should not proceed without approval under the national environment law.

According to the documents filed to the court, emissions from the project would cause global temperatures to rise by nearly 0.0004°C, “which will result in the deaths of millions of corals during each future mass bleaching event”. The ACF also argued that additional warming presents “a real risk” of triggering a spiral of rampant warming, which would all but destroy the Great Barrier Reef.

“We must not fall for the accounting trick that suggests these emissions won’t affect reefs in Australia… The reef is not concerned with the source of the greenhouse gases that damage it”, said O’Shanassy. “We will demonstrate to the Federal Court that Scarborough is likely to have a significant impact on the World Heritage-listed Great Barrier Reef if it proceeds.”

“The head of the International Energy Agency [Fatih Birol] recently said climate chaos is guaranteed if proposed oil and gas mega-projects go ahead”, she said. Birol was responding to the Guardian investigation on global ‘carbon bombs’ projects, which would do little to ease the current energy crisis but be catastrophic for the planet and humanity.

Why the Australian Conservation Foundation case is groundbreaking

James Fernyhough reports on how the ACF’s challenge could “open the floodgates” of litigation cases against companies for historical emissions. This is because the case relies on climate “attribution science” to prove a causal link between emissions from Scarborough and their contribution to damage to the Great Barrier Reef, more than 3,000 km away on the east coast. They will argue there is a connection between GHG emissions, rising global temperatures and the coral bleaching that is causing reefs to die.

Climate law expert Arjuna Dibley told Fernyhough that even if the ACF is unsuccessful, the use of attribution science could break new ground in climate litigation. “Once there is a clear legal position on attribution between emissions and a climate outcome, then that really opens the floodgates for cases against companies that have historically emitted significantly”, he said.

As explained by the ACF’s Kelly O’Shanassy: “If successful, the case will be highly influential in establishing that all new fossil fuel projects must be assessed for the climate damage they would cause if they went ahead.” 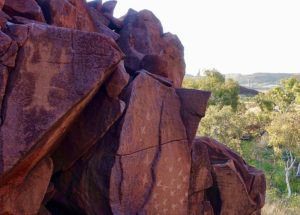 Woodside’s Scarborough is a threat to sacred Indigenous cultural heritage

The Australian Conservation Foundation is not the only legal challenge Woodside faces against their Scarborough expansion. Traditional Custodians of Murujuga’s one million ancient rock engravings (petroglyphs) – the largest concentration of rock art in the world – in Western Australia’s Pilbara are also demanding that Woodside listens to them prior to seeking environmental approval.

The Scarborough project is located near the World Heritage-nominated art, understood to be 50,000 years old and including some of the earliest depictions of the human face. The petroglyphs portray the Traditional Custodians’ ancient culture, songlines and history. There is a real fear that the emissions from the project could damage these sacred engravings.

Can the government meet its promise to protect the Great Barrier Reef?

“An Albanese Labor Government will work to protect the Great Barrier Reef from the threats of climate change”, pledged the new Prime Minister in his leadership campaign. He has also promised an additional AUD $194.5 million to protect and restore the Great Barrier Reef. However, these promises will prove fruitless without measures to stem runaway climate change that is causing damage to the reef. Currently, even Labor’s own emissions reduction target is “Insufficient” to meet the Paris Agreement and instead aligns with 2°C of global warming – under which the Great Barrier Reef has little to no chance of survival.

Furthermore, just hours after being sworn into office, new Resources Minister Madeleine King confirmed the Albanese Government supported Woodside’s mega-polluting Scarborough gas project. Should the ACF’s case be successful in proving a causal link between Scarborough and the destruction of the Great Barrier Reef, it is hard to see how Labor could maintain this irreconcilable position.