Australia Is a Long Way off From Reducing Its Coal, Oil and Gas Production (Video)

Home » Australia Is a Long Way off From Reducing Its Coal, Oil and Gas Production (Video)
Watch this video to find out why Australia is not on track to meet its global warming goals.

Australia is a long way off from reducing its coal, oil and gas production to align it with the Paris Agreement’s goal of limiting global warming to 1.5°C. This is according to a new report, the Production Gap Report of 2021.

As the fourth biggest producer of coal, and the seventh biggest producer of gas in the world, Australia contributes a significant amount to the global fossil fuel output. According to the report, Australia’s economic capacity to transition away from fossil fuels is high. However, the country plans to increase its investments in coal, oil and gas. It will be providing government support to fossil fuel producers along the way. 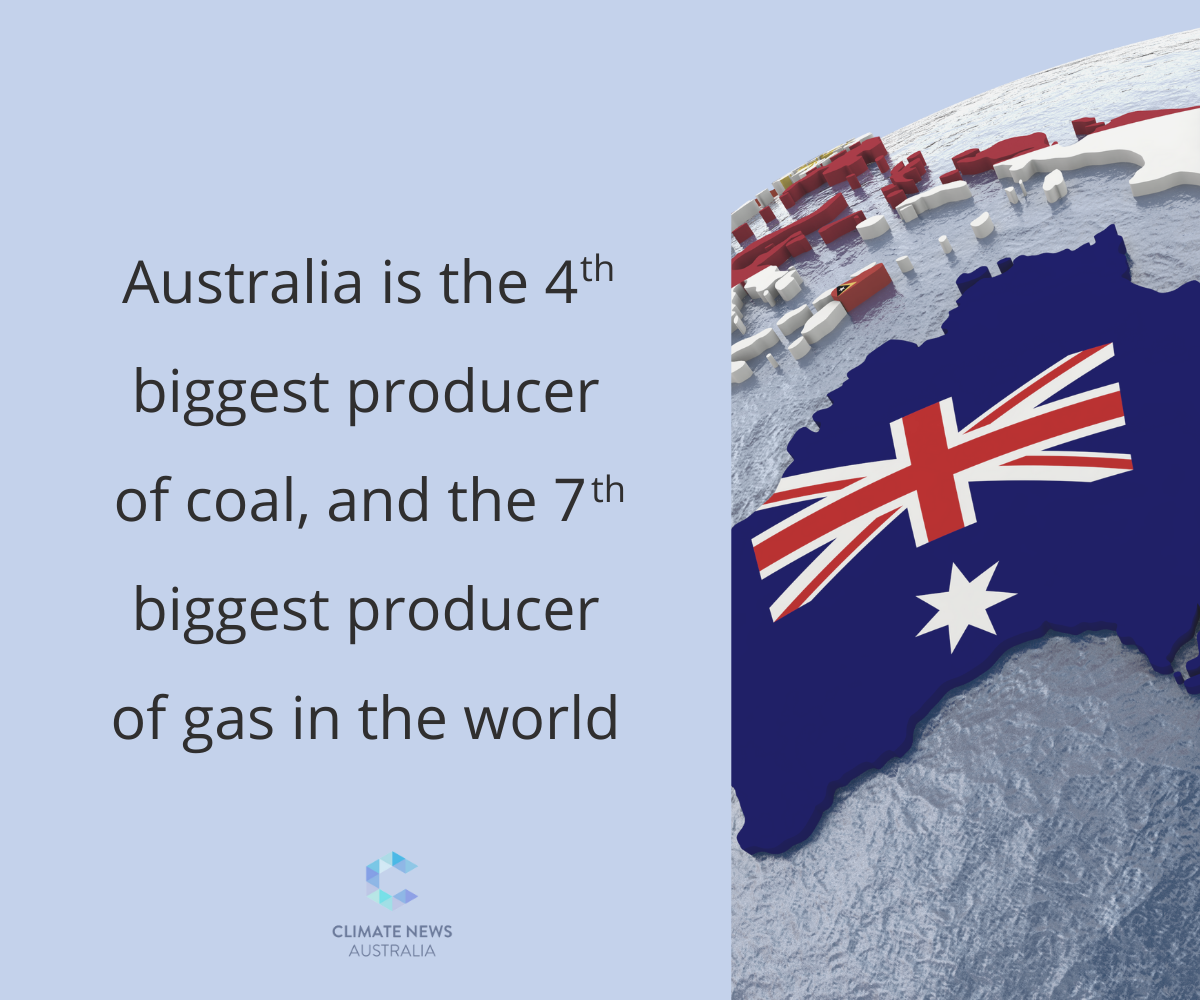 What is the report about?

Several experts and academic and research institutions collaborated to produce the report. This includes the Stockholm Environment Institute and the International Research Centre on Environment and Development.

It was produced under the guidance of the United Nations Environmental Programme. The report was released on October 20, 2021.

Australia’s plans, like those of many governments analysed by the report’s authors, are far from aligning with the Paris Agreement’s goals.

The Australian government supports fossil fuel production in various ways. For example, it allows some operators of fossil fuel projects to pay very little or nothing in royalties or resource rent taxes. The Australian government also exempts fuel used in mining from fuel taxes. The Queensland State government has fast-tracked large scale coal mine developments. But, the government has had to delay these plans thanks to limited financing, market conditions and Chinese import restrictions. 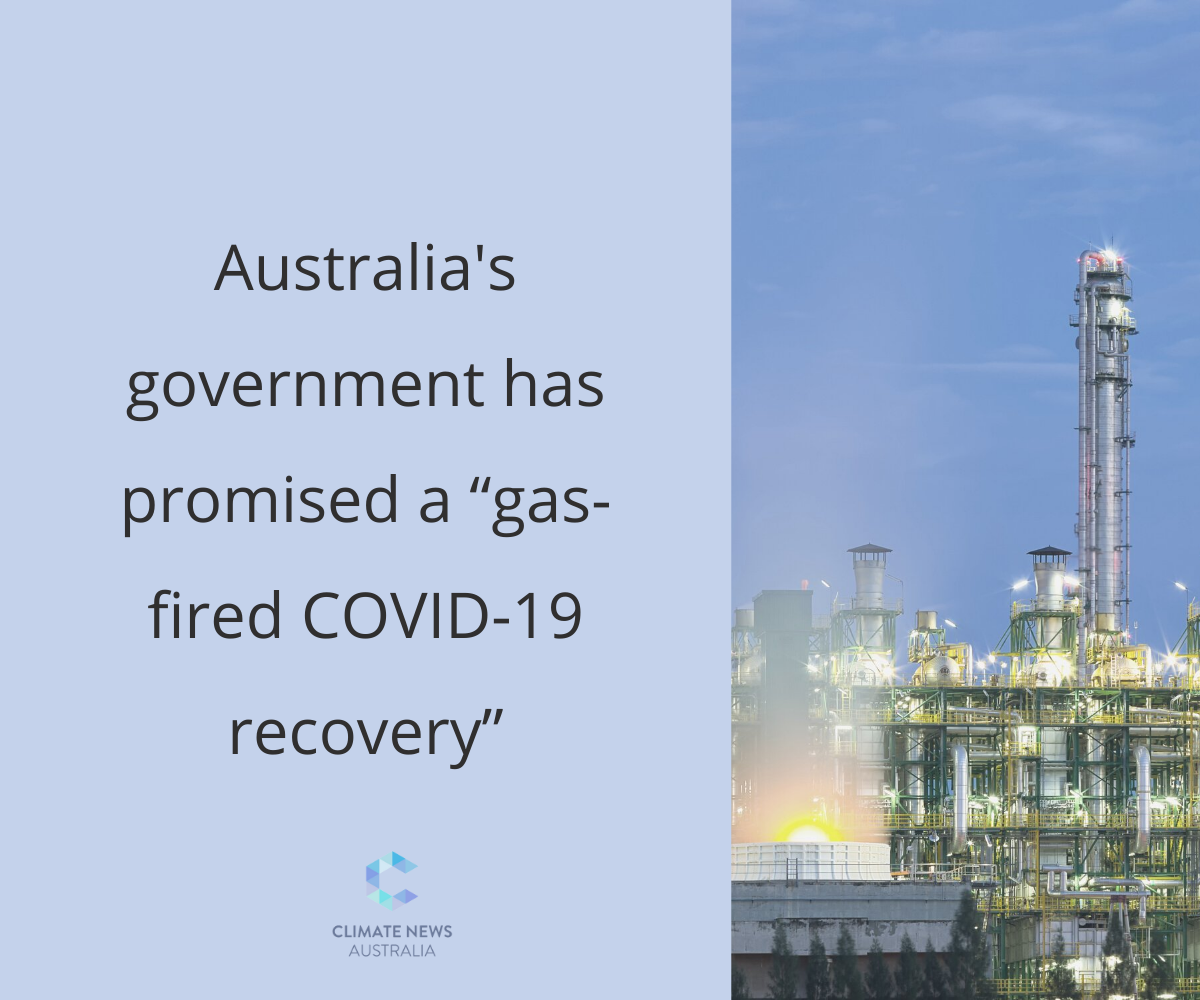 What are other countries’ plans for fossil fuel production?

The report states that governments must immediately start limiting their fossil fuel production “steeply” if the world is to keep warming below 1.5°C. But, on average, the world’s governments plan to produce about 110 per cent more fossil fuels in 2030 than they should in order to meet the 1.5°C warming goal.

Governments have largely not changed their production gaps since the previous analysis was done in 2019. Without immediate changes to their plans, governments will produce 240 per cent more coal, 57 per cent more oil and 71 per cent more gas in 2030 than is consistent with limiting warming to 1.5°C.

Globally, governments will increase gas production between 2020 and 2040. This trajectory is inconsistent with the 1.5°C warming limit. 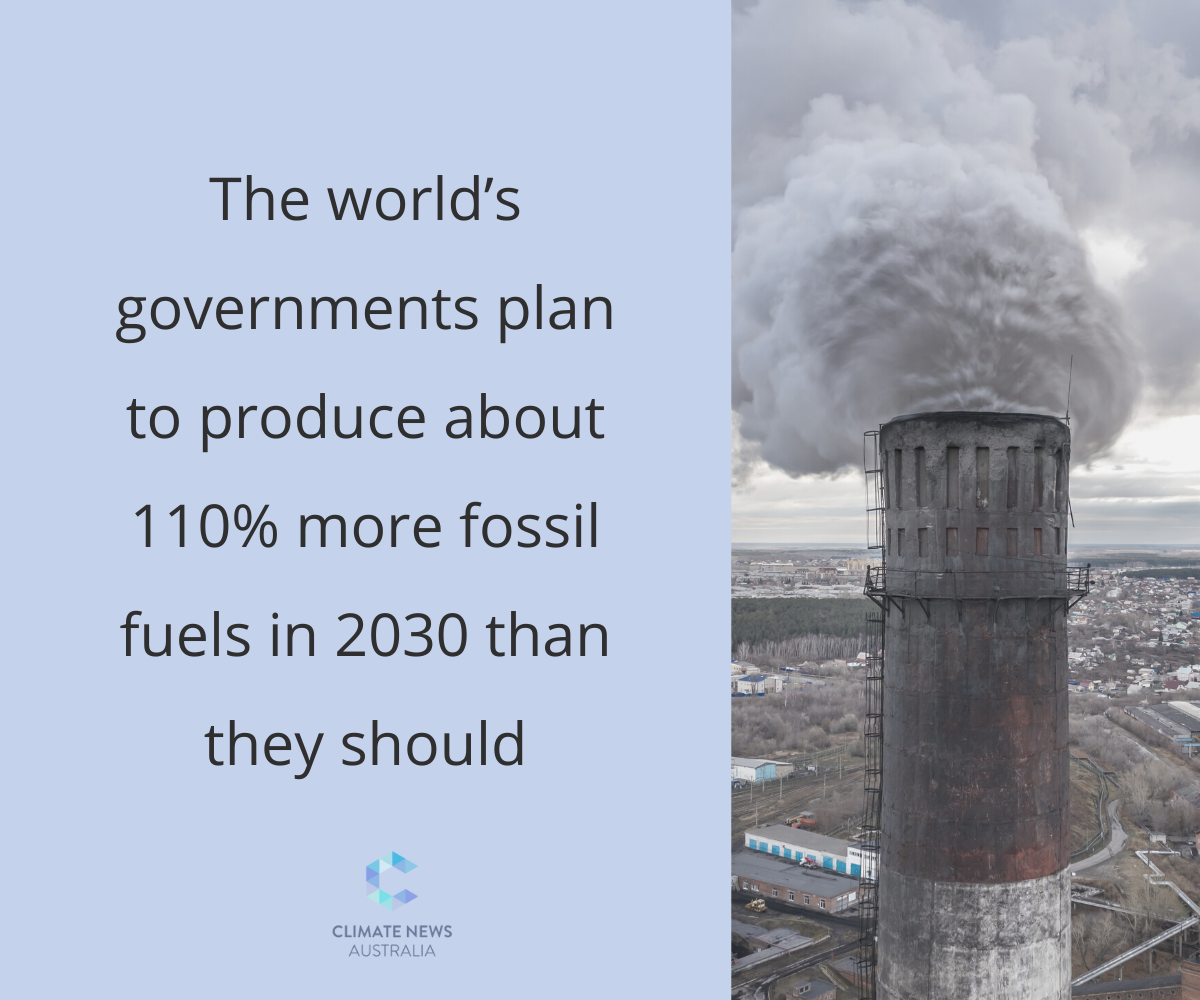 Who is financing new coal, oil and gas projects?

The world’s governments have invested USD $300 billion in new funds in fossil fuel activities since the beginning of the COVID-19 pandemic. This is more than they have invested in non-fossil fuel related energy.

However, a third of major multilateral development banks and G20 development finance institutions will no longer finance fossil fuel production in the future. 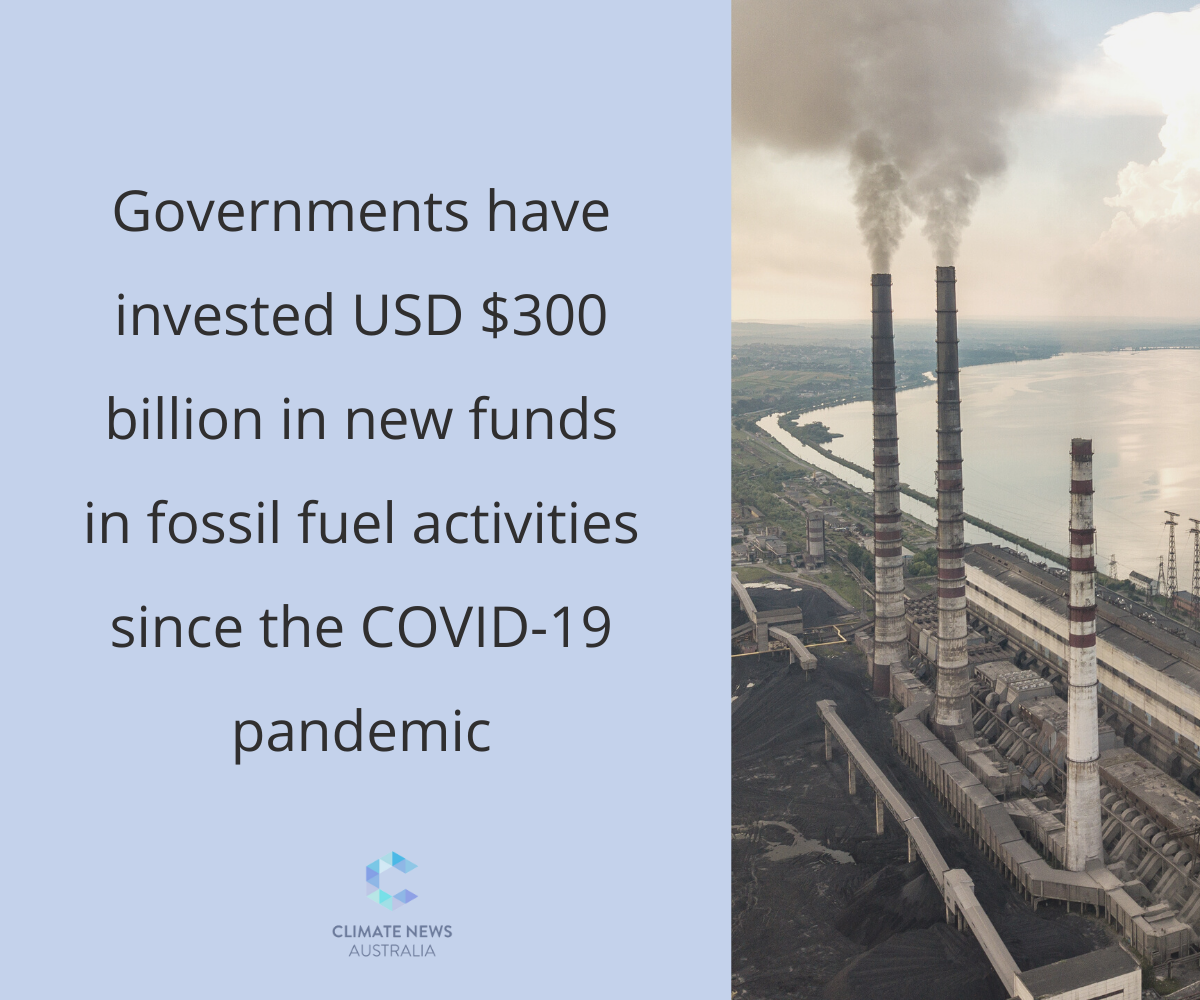 Will countries transition away from coal, oil and gas in time to meet the Paris Agreement’s goals?

The report shows that the world’s major fossil fuel producers do not intend to wind down production in order to meet the Paris Agreement’s warming commitments.

But, gas is also a dangerous greenhouse gas. Methane, the main component of gas, is the second most important greenhouse gas after carbon dioxide. Methane traps up to 86 times more heat over 20 years than carbon dioxide and 34 times more over a century. Therefore, even though methane does not stay in the atmosphere as long as carbon dioxide, it can drive up temperatures quickly in the short-term.

Therefore, the report‘s authors note the need to reduce methane emissions. “If carbon dioxide removal technologies fail to develop at large scale, or if methane emissions are not rapidly reduced, the production gap could be wider than estimated here”, the authors write.

However, merely reducing methane emissions is not enough. Countries must start a “rapid wind-down” in fossil fuel production entirely, the report states. 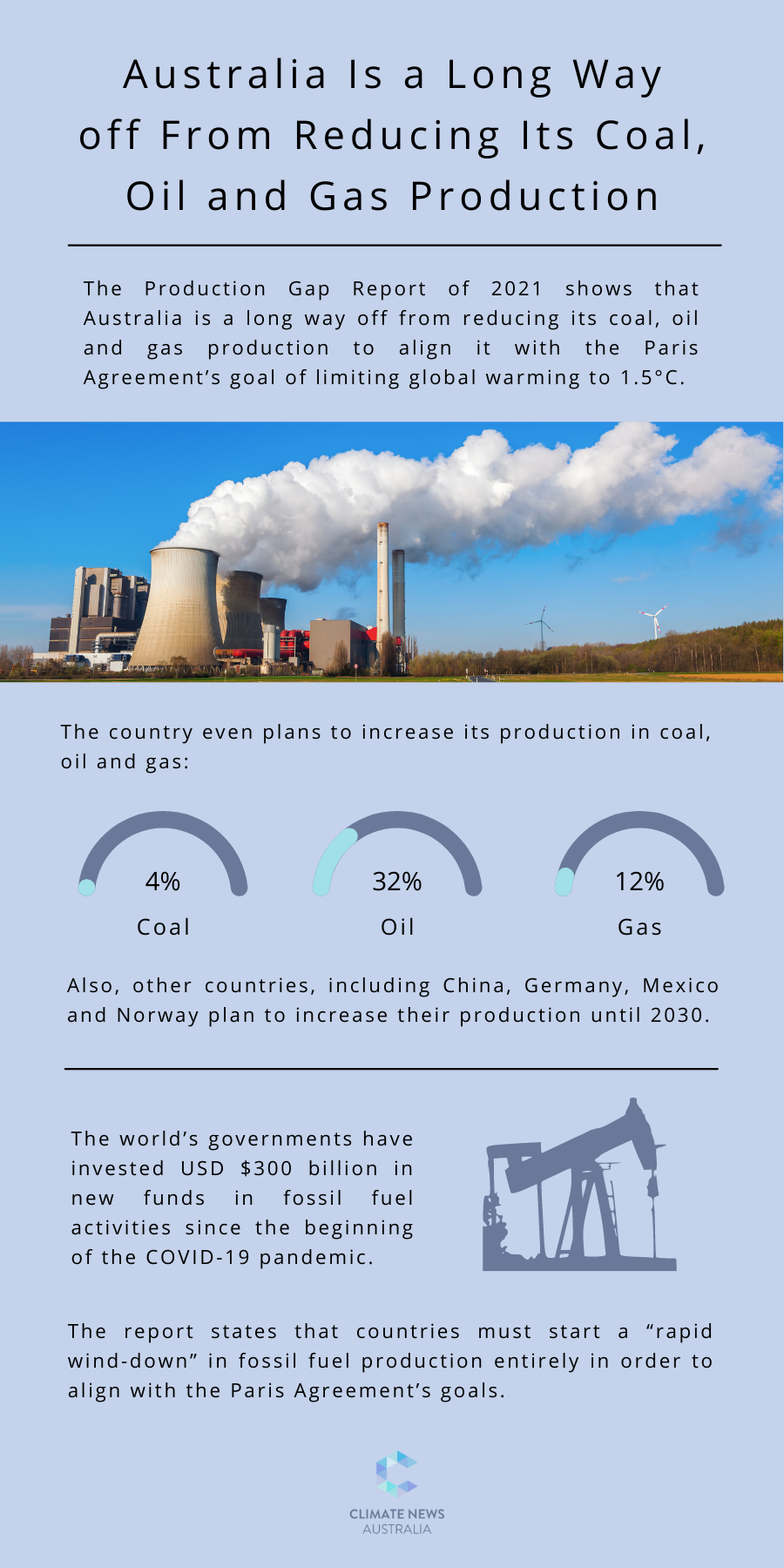