For an equitable and fair energy transition, affluent countries like Australia must end oil and gas production in the next twelve years. This is according to a new report from the Tyndall Centre for Climate Change Research. It would allow poorer nations more time to transition away from fossil fuels while keeping the world within the 1.5°C threshold.

The report, Phaseout Pathways for Fossil Fuel Production, was commissioned by the International Institute for Sustainable Development (IISD). Accounting for countries’ differing levels of wealth, development and economic reliance on fossil fuels, it proposes a range of phaseout dates in line with the Paris Agreement’s goals and commitment to a fair transition.

A staggered phaseout is important, the report states. This is because some poorer nations are so reliant on fossil fuel revenues that rapidly removing this income could threaten their political stability. Conversely, affluent nations typically remain wealthy even after removing revenue from oil and gas. For example, the report found Australia’s GDP per capita will remain largely unchanged after an oil and gas phaseout.

“Responding to the ongoing climate emergency requires a rapid shift away from a fossil fuel economy, but this must be done fairly”, said lead author and Professor of Energy and Climate Change at The University of Manchester, Kevin Anderson. “There are huge differences in the ability of countries to end oil and gas production, while maintaining vibrant economies and delivering a just transition for their citizens.”

Australia has abundant renewable energy resources, such as wind and solar. But, so far, it has not produced a credible exit strategy to end fossil fuels. This is despite that a rapid renewable transition would bring significant economic benefits to the country.

A just transition from oil and gas production

The report emphasises the need for immediate and deep cuts to fossil fuel production. In addition, there must be a rapid phaseout of the current output and no new production facilities of any kind. If the world is to meet vital climate targets, there are no exceptions. However, this must encompass a just transition “based on principles of equity”. This is so the poorest nations today do not get further left behind.

This just transition would mean wealthy, high-emitting nations – Australia included – phasing out all oil and gas production by 2034. It would also entail a 74 per cent reduction in oil and gas outputs for these nations by 2030. This is achievable because these countries have more diverse economies and the means to transition the fastest.

Poorer countries, however, should have until 2050 to end production. They should also receive significant financial support to transition their economies and find alternative revenues. “An equitable transition will require substantial levels of financial assistance for poorer producers, so they can meet their development needs while they switch to low-carbon economies and deal with growing climate impacts”, said the co-author of the report, Dr Dan Calverley.

Wealthy nations have the financial means to transition faster and also the moral obligation, according to Lidy Nacpil, coordinator of the Asian People’s Movement on Debt and Development and co-coordinator of the Global Campaign to Demand Climate Justice. “The carbon budget has been largely depleted by the rich countries that have benefited most from fossil fuel extraction and is now much too small to allocate it fairly. A rapid, just and equitable phaseout of oil and gas is still possible, with the time frames suggested in this report, as long as rich countries provide substantial financial, technical, and political support, and cancel the debt.”

Pathways for a rapid and equitable phaseout

A flagship report from the Intergovernmental Panel on Climate Change (IPCC) warned that failing to limit global warming to 1.5°C would have devastating global impacts, particularly on the most vulnerable. The UN Secretary-General Antόnio Guterres described it as “an atlas of human suffering”.

At current emissions levels, the world will exceed 1.5°C as early as 2030 to 2035. To reach a 50 per cent chance of limiting global temperature rise to 1.5°C, the report outlines the following oil and gas phaseout pathways: 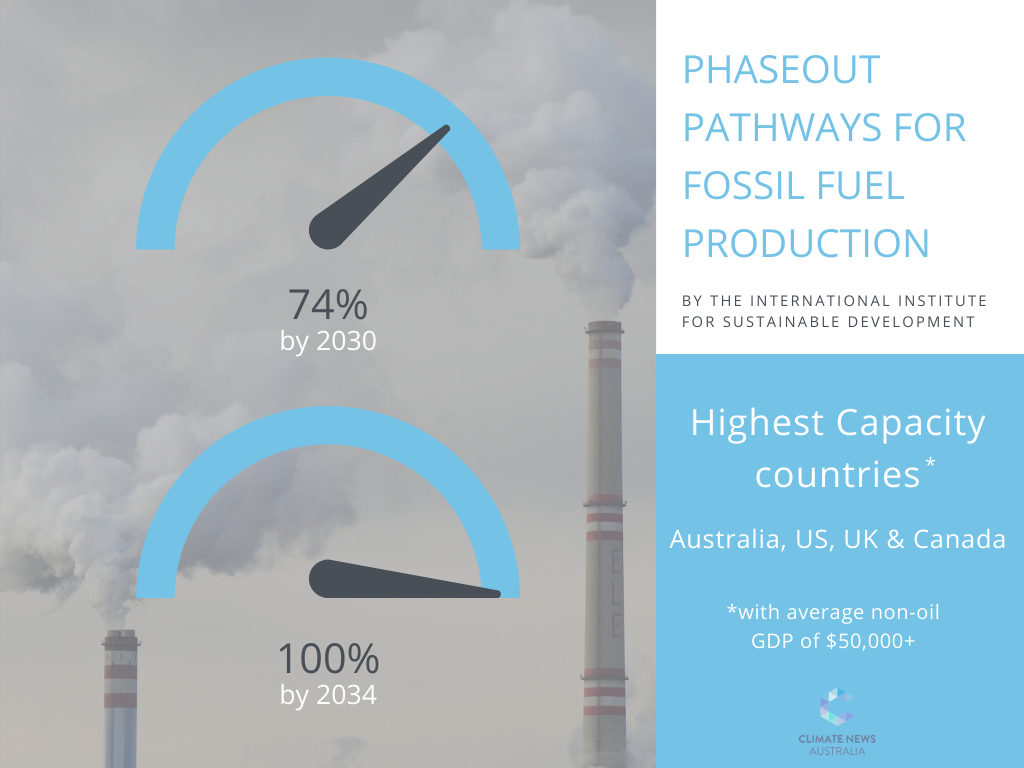 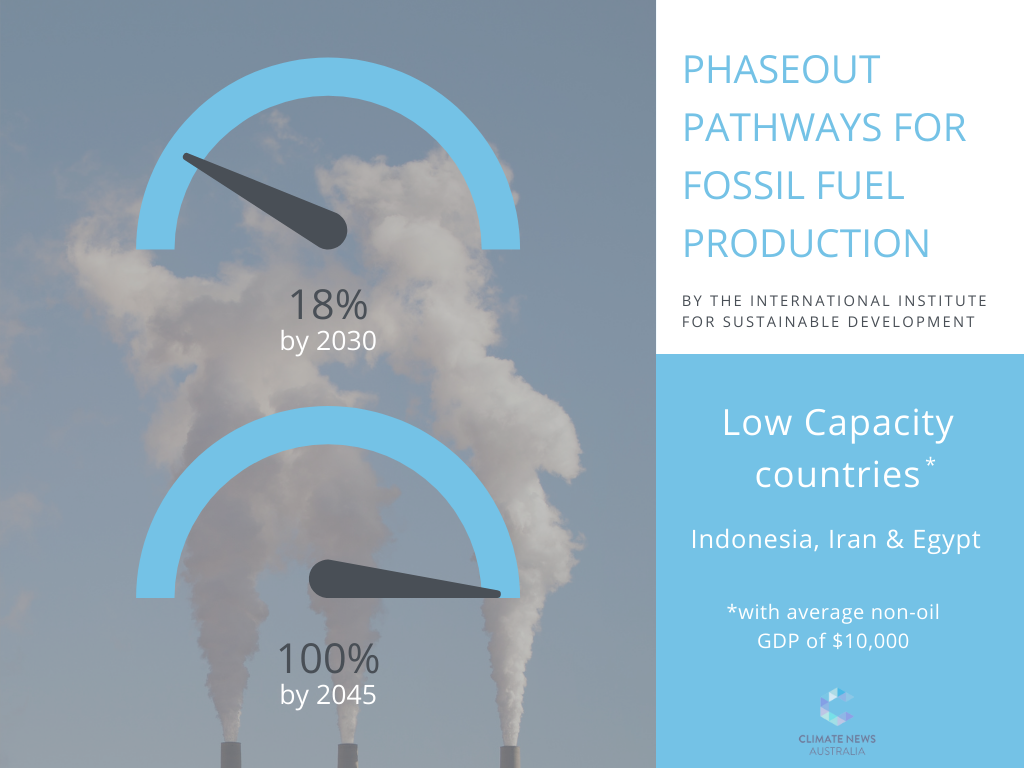 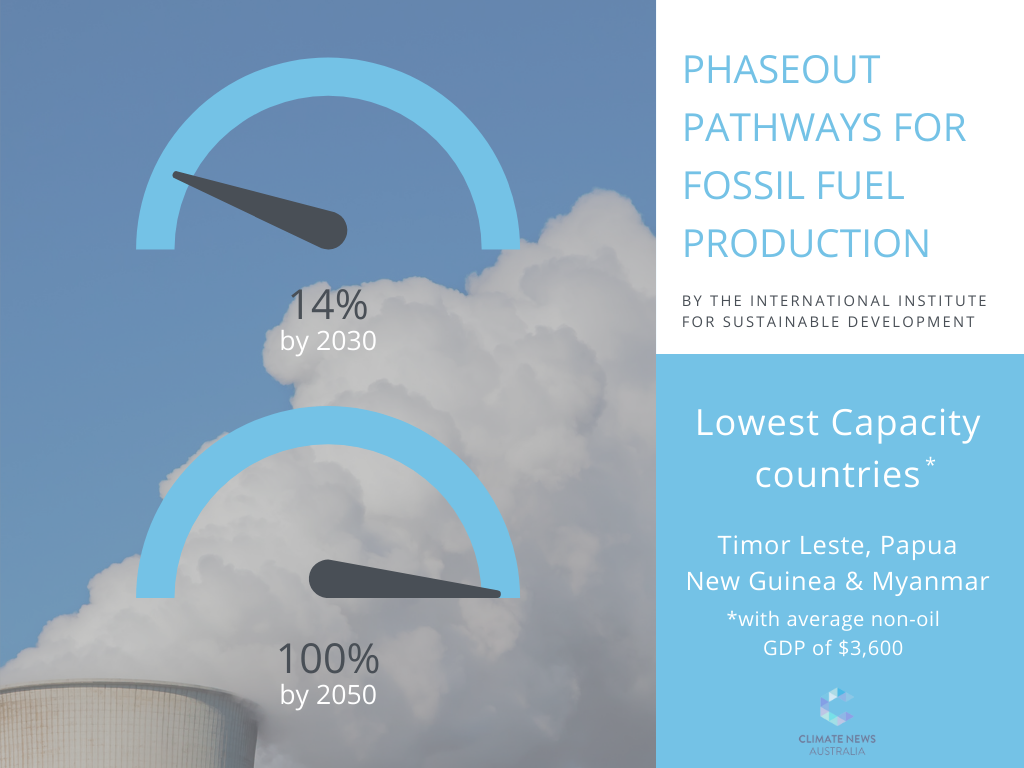 This report calls on governments to get serious about emissions reductions. Governments need to scale up investment into renewable energy and energy efficiency measures.

Leaders of affluent, high-emitting nations, like Australia, have stalled for decades. Now, only the most radical of cuts can offer any hope of avoiding the most dangerous impacts of climate change. “It is now or never if we want to limit global warming to 1.5 degrees Celsius”, says IPCC Working Group III co-chair Jim Skea. “Without immediate and deep emissions reductions across all sectors, it will be impossible.”