Australia has joined the Forests and Climate Leaders Partnership (FCLP) as a founding member. The new international group will enhance global cooperation in forest-based initiatives and drive climate action. The partnership launched at the inaugural Forest and Climate Leaders’ Summit at COP27 in Egypt, in November 2022.

The FCLP is a voluntary partnership of 26 countries, co-chaired by the United States and Ghana. The partnership will help deliver on the commitment to halt and reverse forest loss and land degradation by 2030, while advancing sustainable and inclusive development. This commitment was endorsed by over 140 world leaders, representing over 90 per cent of the world’s forests, at COP26 in Glasgow last year. If achieved, this would deliver 10 per cent of the climate mitigation action needed by 2030 to deliver on the Paris Agreement.

“The foundation of this partnership demonstrates our ambition and reaffirms our recent commitment to protect and conserve 30% of Australia’s land and 30% of Australia’s marine areas by 2030”, said Tanya Plibersek, Minister for the Environment and Water. “To achieve this target we will add millions of additional hectares of Australia’s iconic landscapes to our national estate including all types of landscape from deserts, to alpine areas to native forests”, she added.

Partnership member countries represent the tropical and subtropical rainforests of the Amazon, Australasia, Africa, Asia and the northern forests of Canada. Priorities include scaling up solutions for deforestation, forest degradation, reforestation, and sustainable forest and land use management. Every member of the partnership has committed to driving forward at least one of the following FCLP action areas: 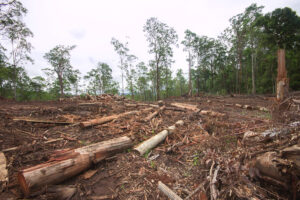 Australia is a “deforestation hotspot” – the world’s only developed country in this category. Industrial logging and land clearing for agriculture all threaten the future of Australia’s forests and iconic species. The 2021 State of the Environment report revealed that millions of hectares of Australia’s forest and woodland had been cleared since 2000, the vast majority for agricultural expansion in Queensland and New South Wales. The loss of native forests destroys the habitats of threatened species, disrupts the water cycle and drives climate breakdown.

These conditions also aggravate the risk of wildfires in remaining forested areas – a threat worsened by the extreme heat and droughts caused by climate change. For example, Australia’s 2019-2020 ‘Black Summer’ bushfires burned more than eight million hectares of native vegetation and killed or displaced up to three billion animals, one study found. During this time, over one-fifth of Australia’s entire forested area burned down in a matter of months. The fires were an “ecological bomb ripping through southeastern Australia”, Minister Plibersek said.

Carbon credit scheme is failing forests and the climate

Despite severe failings concerning forest and land management, Australia has historically relied on Australian Carbon Credit Units (ACCUs) to offset its greenhouse gas emissions. This scheme provides ACCUs to landholders to regenerate native forests to store carbon. The government also intends to meet its 2030 emissions reduction target and reach net zero by relying on its land and forests as a carbon sink. However, Australia’s current land and forest management is “insufficient” to meet the Paris Agreement, according to Climate Action Tracker, due to its poor track record in these areas. One reason for this is the flagship ACCU scheme, which has been criticised as “environmental and taxpayer fraud” by carbon credit expert Professor Andrew Macintosh.

“People are getting ACCUs for not clearing forests that were never going to be cleared; they are getting credits for growing trees that are already there; they are getting credits for growing forests in places that will never sustain permanent forests”, said Professor Macintosh in March 2022. “What is occurring is a fraud on the environment, a fraud on taxpayers, and a fraud on unwitting private buyers of ACCUs, including private households who purchase ACCUs to offset their personal emissions.”

In July 2022, the Minister for Climate Change and Energy, Chris Bowen, commissioned a review of the scheme, citing its effectiveness as fundamental to meeting the country’s new 2030 emissions reduction target. However, the analysis published in October confirmed it is failing. Projects have received credits worth hundreds of millions of dollars to regenerate Australia’s forests, but tree and shrub cover in scheme areas has declined. Successful implementation of the FCLP will require pivoting from these historical failures towards effective and innovative solutions that finally protect and restore Australia’s forests.