A Closer Look at the Australian Labor Party Climate Policy

The Australian Labor Party has set out its climate policy based on a 43 per cent emissions reduction by 2030. Labor’s Powering Australia Plan sets out how boosting the renewable energy sector will achieve this. Independent modelling found that by 2030, the plan would create 604,000 direct jobs and a further 540,000 indirect jobs. Five out of six of these new jobs will be created in the regions.

The Plan will attract an estimated AUD $76 billion of investment. Additionally, it will cut power bills for families and businesses by AUD $378 annually. By 2030, renewables will power 82 per cent of the National Electricity Market under the plan.

In terms of positive climate action, this is a significant improvement on the preceding Liberal-National Party (LNP) policies. But, the plan does not cover all of Labor’s intentions for Australia’s energy sector. For example, Labor plans to expand the polluting fossil fuel industry, including new coal and gas facilities and infrastructure. This is despite its assertion that the preceding LNP’s ‘gas-fired recovery’ has resulted in “soaring gas prices” and “manufacturers closing down”.

Labor’s climate policies seem to send mixed messages on how seriously the Party is taking climate change. Do they demonstrate the level of climate action Australia desperately needs?

A closer look at the Australian Labor Party climate policy

Labor is in favour of approving new coal mines, as long as they meet certain environmental standards. They have no plans to phase out Australian coal production for export. Regarding natural gas, Labor considers gas a “transition fuel” and has no plans to phase out gas production. It is also planning coal and gas production past 2050. There is little detail available on the future of Australia’s gas export industry in current plans. 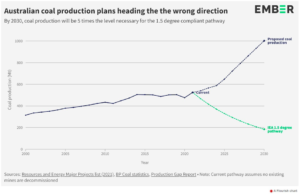 In addition, it has plans to modernise and extend Australia’s ageing energy grid through the AUD $20 billion plan to Rewire the Nation. Furthermore, its Powering the Regions Fund will support the development of new clean energy industries. This includes energy efficiency improvements, renewable hydrogen production and export and bioenergy. It also plans to reach net zero emissions for Australian Public Services by 2030.

Labor will establish an AUD $15 billion National Reconstruction Fund to “create secure jobs for Australian workers, drive regional economic development and boost Australia’s sovereign capability.” AUD $3 billion of this will support renewables manufacturing and the deployment of low-emissions technologies. This includes wind turbine, solar and battery manufacturing, and cleaner steel and aluminium manufacturing. In addition, it will fund projects such as hydrogen electrolysers for cleaner fuel switching and innovative waste reduction packaging.

Regarding jobs, Labor has committed AUD $100 million to support 10,000 New Energy Apprenticeships. It has pledged AUD $10 million for a New Energy Skills Program, which will work with industry, unions and states and territories to ensure training pathways are fit-for-purpose.

For agriculture, the plan includes investing in developing new technologies, improving carbon farming and offsetting opportunities, and bringing down electricity prices. Labor also plans a review of the Australian Carbon Credit Units (ACCUs). This is to investigate and ensure their integrity, consistency with agricultural and other objectives, and contribution to environmental, economic and other benefits, such as biodiversity.

The Labor Party climate policy includes introducing an AUD $500 million Australian Driving the Nation fund. It plans to establish a National EV Charging Network with charging stations, approximately every 150 kilometres across major roads, as well as hydrogen and biofuel refuelling infrastructure. Labor also has plans to develop a National Electric Vehicle Strategy and Electric Car Discount. This will ensure many EVs are exempt from the five per cent import tax and the 47 per cent fringe benefits tax.

Moreover, Labor has a National Rail Manufacturing Plan. This includes more trains to be built by local manufacturing workers. Futhermore, it involves building a fast rail line linking Sydney and the Hunter.

Labor has pledged funding for cleaner modes of transport

Labor pledges to prove AUD $200 million per year on disaster prevention and resilience, and conduct a Climate Change & Security Risk Assessment. It has plans for a Disaster Readiness Plan to fund disaster recovery through the existing Disaster Recovery Funding Arrangements.

There are plans to cut red tape to disaster resilience funding and improve the efficiency of disaster recovery processes. The aim is to simplify and fast-track payments to disaster victims and infrastructure repairs. It also plans to reduce the risk of expensive damage to homes and businesses. This is to assist with spiralling insurance premiums in disaster-prone regions.

Labor pledges to restore the role of the Climate Change Authority (CCA), ensuring it provides guidance on future emissions reduction targets and delivers an annual report to Parliament. Labor bids to co-host a future Conference of the Parties in Australia with Pacific partners. The Party has also promised to reinstate the position of Climate Change Ambassador in the Department of Foreign Affairs and Trade, and constructively participate in international forums on climate.

However, Labor’s 43 per cent reduction by 2030 remains “Insufficient” to meet the Paris Agreement, according to Climate Action Tracker. Currently, their policy is consistent with 2°C of warming, according to Climate Analytics. Instead, Australia must adopt 57 per cent reduction – or 60 per cent once climate finance commitments are included – to meet a 1.5°C compatible pathway. Additionally, while an 82 per cent renewable electricity network by 2030 is a reasonably strong target, Australia should aim for 100 per cent as “low hanging fruit”, according to the Clean Energy Council.

Analysts previously speculated that Australia will adopt a more ambitious 2030 target to become 1.5°C aligned ahead of COP27 in November. However, Climate Change and Energy Minister Chris Bowen quickly dismissed this. Contrary to the scientific evidence, he insists that Labor’s 43 per cent reduction already goes far enough to meet Australia’s commitments to limit global heating to 1.5°C.

Moreover, Labor’s plans for new fossil fuel plans are not included in Labor’s Powering Australia Plan. They are therefore excluded from the 43 per cent reduction calculation. The International Energy Agency (IEA) has calculated no new fossil fuel projects are compatible with meeting 1.5°C. If all planned coal and gas projects in Australia were to go ahead, they would be as polluting as 200 new coal power stations.

So, can Labor really become a “renewable energy superpower” and meet net zero while simultaneously expanding its fossil fuel industry? The international scientific consensus is no. If Australia wants to become a climate leader, it must strengthen decarbonisation efforts across all economic sectors. Furthermore, no new coal, oil and gas projects should be approved.